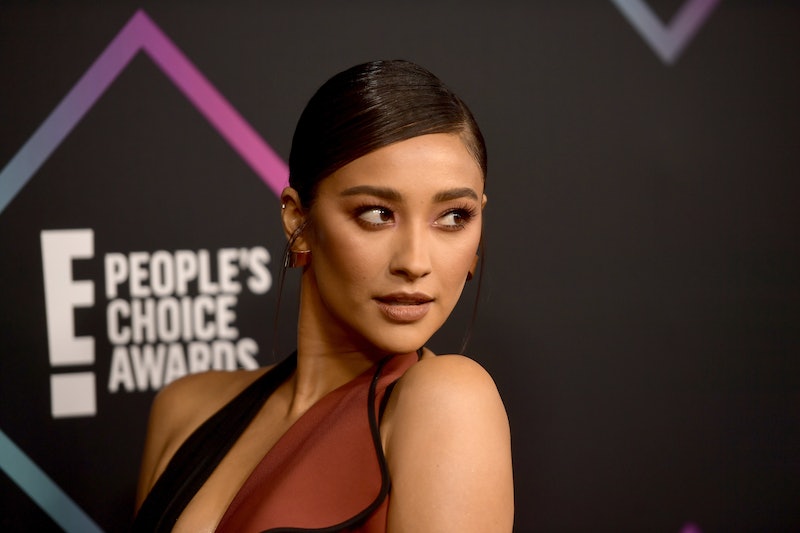 Emily Fields has bid farewell to A’s Dollhouse and has moved on to Hulu’s Dollface. As Deadline reported on Wednesday, April 10, actor and esteemed coach of the Rosewood High School swim team Shay Mitchell has joined the Dollface cast. The Pretty Little Liars actor will star on the Hulu original series alongside Kat Dennings, Brenda Song, and Esther Povitsky. According to Deadline, Mitchell will play the role of Stella, a free-spirited hedonist (i.e., a character who may or may not be the opposite of Emily Fields?). Mitchell has replaced Lex Scott Davis and it'll be her first major role in a comedy series.

Created by Jordan Weiss (Harley Quinn, People of Earth), Dollface is a 10-episode comedy about a woman named Jules (Dennings) who goes through a breakup and, as Hulu put it in a press release last November, “must deal with her own imagination in order to literally and metaphorically re-enter the world of women and rekindle the female friendships she left behind.” As Deadline reported earlier this year, Song plays Jules's former best friend named Madison, and Povitsky plays Madison's coworker Izzy. Mitchell's Stella is Madison's other best friend from college.

After Deadline released the show's latest casting announcement into the digital forest that is the internet on Wednesday, Mitchell shared a screengrab of article on Instagram Stories. "It's official," she wrote in an IG Story that preceded the screenshot of the announcement.

You know what else happened on Wednesday? Mitchell turned 32! A birthday and a casting announcement? Happy Shay Day to Shay.

This role in the scripted comedy TV series will be bit of a pivot from her recent performances— and yes, by "bit of a pivot," I do mean "major pivot." For seven seasons, Mitchell was one of the pretty little liars on ABC Family/Freeform series Pretty Little Liars, a mystery series about a group of friends whose lives are turned upside-down when a mystery person starts sending them menacing text messages. After the hit show ended in 2017, Mitchell went on to play Peach Salinger in Lifetime’s stalker thriller You. She was also the star of 2018 horror flick The Possession of Hannah Grace.

And soon, we will get to see her play Stella, who according to Deadline, is cool and childlike... and also really into soundbaths, furniture, and ecstasy. Toto, I don't think we're hanging out with Emily Fields anymore.

The premiere date has not been announced, so no, we do not know when this show will be available for watching. Hey, how about some things we do know: Dollface sure sounds like another promising addition to Hulu's ever-growing collection of original comedy series, Stella sure sounds like a fun role for Emily Fields, and today sure has been a happy Shay Day to all.