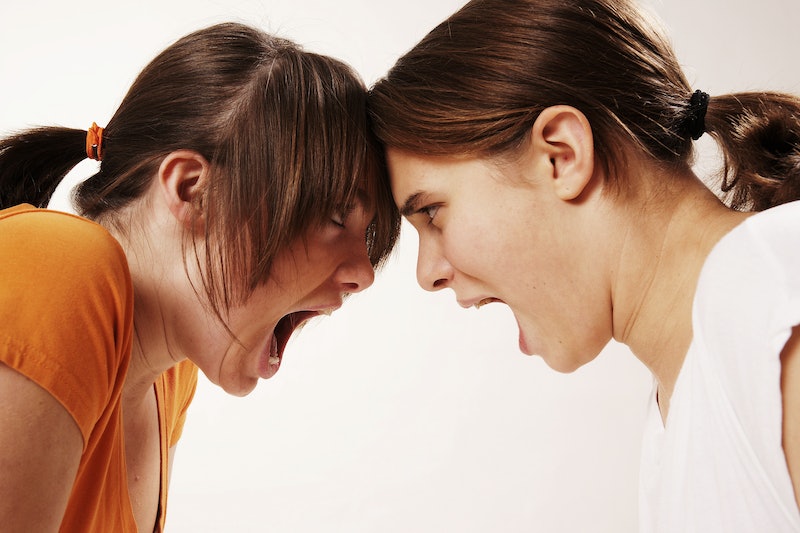 Three years ago, I went through one of the hardest "breakups" of my life: One of my best friends decided we part ways. I spent the following three years brainstorming ways to get her back — until it occurred to me that maybe, this friend breakup was for the better.

I'd always blamed myself for the falling out. She was, after all, the one who got mad at me. But when I told other people about it, they usually said, "It sounds like you didn't do anything wrong" or "she doesn't sound like the greatest friend anyway." I'd been so wrapped up in trying to fix my own supposed shortcomings, I hadn't seen her's.

I'm not the only one who has pined to get a friend back only to realize that maybe, they didn't want her back after all. "I have personally experienced losing a friend and contemplated reconciling, but what stops me is remembering how I felt around them," Katelyn, 24, tells Bustle. "I constantly felt like they didn’t care (never asking about my life or what was going on), and [they] were constantly speaking ill of others. It felt like I was stuck in a bubble and if I ever tried to leave, they would 'punish' me by not reaching out. It was toxic and not worth going back to, no matter how many good times we had."

"I 'broke up' with a friend of 10 years, and although there are times when I miss her and become nostalgic about good times we had together, her frequent self-aggrandizing social media posts convince me that I should not," Victoria, 62, tells Bustle. "I tend to 'hang in there' for too long, which sometimes has a negative impact on me, so I am at peace with my decision NEVER to speak with her again."

Here are some signs that you should also stop plotting to get your friend back and start being glad a toxic friendship is out of your life.

We don't put up with dates who ghost us or make us jump through hoops just to get a damn text message (or at least we know we shouldn't). So, why do we put up with friends who do this?

1. Your Friend Was Distant

If your friend always put you on the backburner, parting ways will probably be good for your self-esteem in the long run. "If your friend didn't truly show up for you the way you needed them to, didn't treat you and your friendship in the highest regard, and/or violated your trust in a major way, perhaps they weren't a true friend to begin with," grief coach Rachel Ricketts tells Bustle.

A friend who makes you feel like everything's all your fault, including the breakup, could be gaslighting you. "Gaslighting is a subtle form of manipulation and abuse that is really hard to name or pinpoint, but is often a factor where friendships have fallen apart without any 'good' reason," says Ricketts. "If you were being gaslighted, it means that your friend didn't take ownership for his/her behavior and would spin any situation so as to make you the enemy or culprit. You would leave your interactions with this person feeling down, defeated, unworthy, invalidated and/or stupid." And who needs more of that?

You might think you miss your ex-friend when what you really miss is having a best friend or enjoying certain experiences with them, says Ricketts. But you may not actually miss this person themselves, and that's OK.

4. You Disagree With Why They Left You

It's easy to be hard on yourself when someone else decides you're not worth being friends with. But do you think you were a bad friend? Or are they the ones holding you to unreasonable expectations?

"If the friend ditched you because you turned them down for something you did not want to do or money you did not want to lend, this person is using emotional manipulation to try to get you to do something you do not feel comfortable with," licensed social worker Kryss Shane tells Bustle. "If there was a huge fight that left you feeling embarrassed because the person made angry comments about your beliefs, your appearance, or your choices, this person chose to be cruel when angry rather than to respond out of love for their friend and is probably someone you do not need in your life."

5. You Didn't Look Forward To Seeing Them

If you started to dread seeing your friend toward the end, you probably knew deep down that the friendship wasn't for the best. "That was your body telling you that this person is someone not right or healthy for you to be around," says Shane.

6. You're Relieved You Don't Have To Deal With Them

The fact that you don't have to deal with your former friend anymore may seem like just a silver lining, but it's actually a very significant piece of information, relationship talk show host Susan McCord tells Bustle. Your friends shouldn't ever feel like people you have to "deal" with. Focus on those who leave you energized, not drained.

An ex-friend who recently gossiped about you, turned other friends against you, or otherwise lashed out in the wake of your breakup probably would continue causing problems if you became friends again, says McCord.

None of these things mean the friend breakup will be easy. But just because it's hard or sad doesn't necessarily mean it's a bad thing. Give it some time, and you may be glad you made room for more positive people in your life.