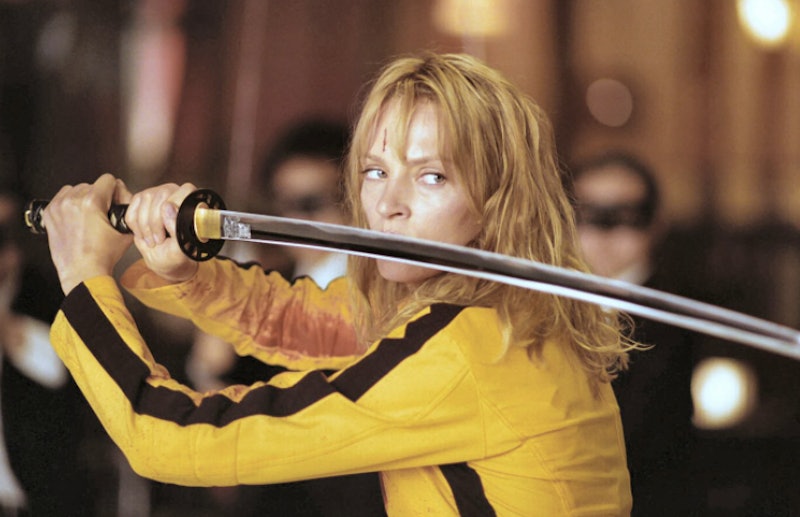 Reading through multitudes of sexual harassment assault allegations against Harvey Weinstein can be harrowing for any woman. For so many of us, these accusations remind of us things that have happened to ourselves, our friends, our mothers and sisters and often, the helplessness that comes with it. In fact, a 2016 Cosmo survey found that 1 in 3 women has been sexually harassed at work, and according to the U.S. Equal Employment Opportunity Commission, nearly 70 percent of women who experience sexual harassment at work do not report it. And for those who have been lucky enough not to have direct contact with sexual harassment or assault, it is still a great fear for many women — 31 percent, according to a 2016 Gallup poll. It's enough to make any woman want to distance herself from all things Weinstein, but should we stop watching Weinstein produced films in response to the allegations against him? We asked female film critics to weigh in.

Of course, unlike singular problematic filmmakers like Woody Allen (whose daughter has accused him of sexual abuse, amid numerous denials from Allen himself), ignoring Weinstein's impact in the landscape of film is almost impossible. The man has executive produced over 100 films, so many of which are considered classics — the Lord of The Rings films, Pulp Fiction, Kill Bill Vol. 1 & 2, The Artist, The King's Speech, and Fruitvale Station to name a very small but significant few. Name a talented actor, male or female, and there's a serious chance they starred in a film produced by the ousted Hollywood heavyweight. But what do we do now?

How will these accusations — which continue to roll in days after the New York Times' initial exposè — affect how we view what is frankly, most of recent film history? The answer isn't clear cut or easy to navigate, but these women have a few ideas.

You Don't Have To Hand Over Your Dollars

"Knowing what I now know about Harvey Weinstein's alleged actions, it makes it exceptionally hard to enjoy the films Weinstein contributed to. Like other filmmakers or actors who have done unthinkable things, their actions and the claims made against them by women — even if unproven — will always linger in the back of my mind when engaging with their art moving forward.

The women who have come forward to share their stories should be supported, and Weinstein's films, no matter how varied and acclaimed they may be, should not. This is not to say I will never watch a Weinstein film — his reach and influence over the decades he has been in power is unfortunately too vast for me to make that promise — but I will make a concerted effort not to support him (with my dollars at the movie theater, for example) moving forward. It is the least I or any of us can do."

The key, however, is to watch and remember with respect and care. Think about the women who persevered to make their art...

It's OK To Support The Other Artists Involved

"When horrifying accusations like the ones waged against Harvey Weinstein come to light, it's very easy to scream for a boycott and move on (and, as I've sometimes seen in cases such as these, then actually ignoring it and not even holding fast to such public pronouncements), but when it comes to the question of what to actually do and how to really proceed, it gets murkier. And when it comes to cases like this, where years and years of art and cinema, mostly made by other people, are liable to be effected, it's even trickier.

Harvey didn't make these films, even if he produced them or distributed them or, as so many people know he loves to do, edited them in his own shape, and there's a tremendous amount of work that went on far beyond his reach. But they do feel tainted now, and likely always will. How do we watch? With an eye to the good people and talented artists who helped make them, and with a tremendous amount of care and respect when they involve women who have spoken out against Weinstein, who have voiced their own allegations.

To ignore the films is to also ignore them, and that's not something that should make anyone feel good. As for film history, it's changed now, forever. The key, however, is to watch and remember with respect and care. Think about the women who persevered to make their art, not the man who [allegedly] tried to stop them or change them for his own sick gains."

It's OK If You Want To Change Your Mind

"I've always found it hard to separate the artist from the art, and perhaps the reasoning is selfish — I've never liked the idea that we should have to miss out on great films, TV shows, music and more because of the actions of one person. It's how I've justified still watching Woody Allen films over the years, or supporting the works of Joss Whedon, for instance, despite the allegations against them. And my guilt is helped by the fact that it's never just that one person responsible for making that piece of art — hundreds of other innocent, talented people contributed, too, and I don't feel that it's necessarily fair to boycott their work.

That said, it's getting harder and harder to make that justification. I'm repulsed by the alleged actions of Weinstein and other men accused of sexual assault, and supporting them, even in the smallest of ways, by watching their movies or listening to their music, is not something I'm comfortable with doing.

I can't say, though, that I'm never going to rewatch a Weinstein-made film I love, or turn off the channel when Annie Hall comes on TV — I understand why others would, but I appreciate these works too much to avoid them now completely. But I do know that when it comes to any new work made by these men, I'm going to think twice before giving them my money or attention."

It's OK To Be Angry & Confused

"I guess I can only go film by film, and see how I feel as I watch it. Which probably goes against the decisions I've made previously about [other men accused of sexual assault or abuse]. So as a film journalist, I'm in a tough spot, but not as tough a spot as these women who first-hand experienced the harassment and assault of these men.

You Don't Have To Separate Art From Its Creator

"I have a very hard time being able to separate the art from the artist. I know that lying underneath whatever 'genius' is there, there's something so much worse and it's something that hurts women. How can anyone derive joy or entertainment from that? Harvey Weinstein was not the artist, but he sure helped get the art made, all but ensuring a horrible, dark cloud hanging over everything with the Miramax name. It makes every Oscar win, especially for the women under his [alleged] reign of terror, feel like it came at far too painful a price. If and when I ever feel ready to revisit certain Miramax movies, I'll do so with a heavy heart and the knowledge that far too many women [allegedly] suffered and had to put their neck on the line to ensure future generations don't have to endure what they did."

"Apart from my journalism and my personal belief in the women who come forward with allegations, my only real protest in this is to withhold my ticket price. Perhaps we could donate the money we might spend on such a movie to a women's aid organization, like so many of us did with Fifty Shades of Grey.

The same tainting effect applies retrospectively. I find it sad and disturbing to think of films on which any of these brave women who've spoken out may have worked. I'd like to, for instance, remember and honor the performances of people like Gwyneth Paltrow and Angelina Jolie, but it's hard to see past the fact that these films were facilitated by an alleged serial rapist. I think the revelation of Harvey Weinstein's [alleged] acts against women have altered film history irrevocably — and, we have to hope, the culture in which future films will be made."

You Can Demand Actual Change

"... I think a way us for as journalists and movie-goers to deal with Weinstein and Miramax is to hold [film companies] accountable going forward. Everyone who is concerned about film — journalists, industry players, and regular movie lovers — can demand that the Weinstein-owned companies take actionable steps to ensure that women are working at all levels of their businesses as well as behind the scenes of their movies. The company must make a complete 180 and hire people who don't get their kicks from wielding power, but enjoy the collaborative process of film."

You Can Decide For Yourself

At the end of the day, there is no right or wrong way to handle Weinstein's film legacy in light of the recent deluge of allegations against him. What is right, however, is to decide what makes sense for you as a movie fan, as a woman, and as an advocate for the alleged victims, many of whom showed their own talents in productions backed by Weinstein. Only you can truly decide whether continuing to watch those films is right for you and whatever you decide, just know that the women above have your back.