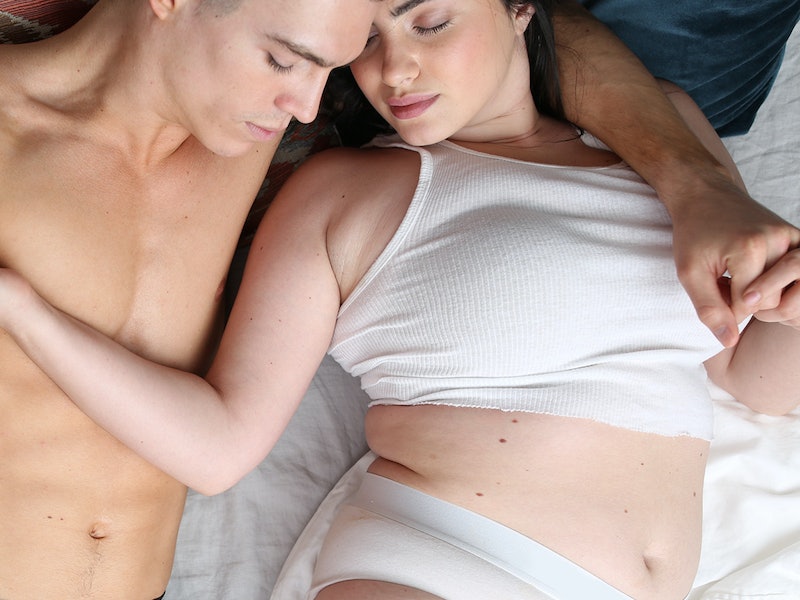 We’re always hearing that we could be having better sex, a better orgasm, or a better relationship. But how often do we hear the nitty-gritty of how we can actually better understand our deepest desires and most embarrassing questions? Bustle has enlisted Vanessa Marin, a sex therapist, to help us out with the details. No gender, sexual orientation, or question is off limits, and all questions will remain anonymous. Please send your sex and relationship inquiries to tips@bustle.com. Now, on to today’s topic: should you be worried if your new partner expresses interest in rough sex?

Q: “My best friend recently told me that he started seeing a girl who likes rough sex. Each time they have sex, she seems to have gotten a little wilder. She keeps making more and more intense requests. Now she wants him to tie her up.

I told him he's playing with fire. Am I overreacting? Or could he be seriously injured? He never tried this in any of his previous relationships, but he really likes her. I just don’t want him push himself to do things that aren’t safe, just because he wants to impress her.”

A: Thanks for the question! There are a lot of misconceptions about rough sex, so let’s dive right into it. Here are four things you need to know if your new partner expresses an interest in having rough sex.

Here’s perhaps the most important part of my entire response: it’s perfectly OK to like rough sex. As I read your email, I didn't get the impression that there were any actual glaring red flags in your friend's budding relationship with this new girl — just an interest in rough sex. And there's nothing inherently troubling or unhealthy about that.

It’s important to keep in mind that “rough sex” is a broad umbrella term that can mean a lot of different things. To some people, rough sex means hard and fast pounding during intercourse. To others, it can mean bondage, domination, and pain play. But again, it’s perfectly fine to want to do any of those activities, as long as it’s done safely between consenting adults (more on this in a minute).

Again, there’s nothing about liking rough sex that is an immediate red flag. Many people make assumptions about people who like rough sex, but it’s not a sign of any deeper issues. For example, a lot of people assume that people who like rough sex have been abused in the past, but that’s just not true. Some people just like playing with the power dynamics during sex; others like taking on roles they would never take on in their day-to-day life, or mixing a little bit of pain with their pleasure.

Rough sex is a pretty popular — and again, totally normal — kink. I can guarantee you that you know other people who are into rough sex.

But You Have To Do It Safely...

That being said, you should never play rough in the bedroom unless you’ve also had explicit conversations about safety. Rough sex can be very safe, but you need to follow specific guidelines for whatever it is that you’re doing. For example, if you’re tying up your partner, it’s important to follow a few rules:

You need to make sure to communicate during the act itself, too. It can also help to do a "download session" afterwards, to talk about how to improve the next time around.

It’s OK if a new partner — or your friend’s new girl — doesn’t know how to have rough sex safely. For all you know, she may never have experimented before, but is interested in trying it out for the first time with your friend. You don't have to know every detail about the sex you want to have before bringing it up with a partner.

But anyone participating in rough sex should be willing to do some research on the specific acts they want to do, and hammer down the details before hopping into the bedroom. Your friend can read some of my past articles for guidance:

If the two of them end up getting serious about each other, they could even attend one of the workshops popping up across the country aimed at people who want to learn how to have rough sex safely (like these at Armory Studios in San Francisco).

Another extremely important aspect of sexual safety is consent. It’s so important that I thought it warranted its own section. Anyone engaging in rough sex needs to make sure that they feel good about it. It sounds like your friend's new girlfriend is explicitly asking for his consent, rather than just trying to do things in the moment, which is a good sign.

Now it’s on your friend to make sure he can enthusiastically consent. You can remind him that no matter how much he likes this girl, he’s entitled to his own boundaries. No one should ever push themselves to do something they’re not comfortable doing, just to impress someone else.

One good thing your friend’s girl has going for her is that she seems to be gradually easing the two of them into rough sex. It doesn’t sound like she came out the gate asking him to choke her or enact a rape fantasy. It’s perfectly fine to want to try out either of those things in the bedroom, but those scenarios require a lot of research, planning, and trust; it’s typically best to ease into rough sex with a new partner slowly. You need a bit of time to make sure this person plays safely, and respects your boundaries. You don’t want to put your complete trust in someone the first few times you sleep with them. The level of trust required for rough sex needs to be earned.