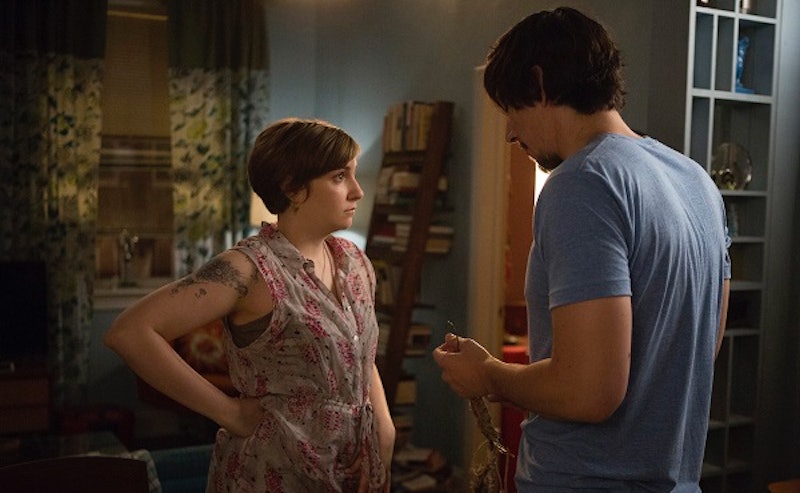 We’re always hearing that we could be having better sex, a better orgasm, or a better relationship. But how often do we hear the nitty-gritty of how we can actually better understand our deepest desires and most embarrassing questions? Bustle has enlisted Vanessa Marin, a sex therapist, to help us out with the details. No gender, sexual orientation, or question is off limits, and all questions remain anonymous. Now, onto this week’s topic: how to initiate sex without sexual coercion.

Q: “I've read about sexual coercion, but it seems like it can be kind of subtle sometimes. Like, what's the difference between someone initiating sex and and being coercive? For example, it’s not like my partner and I want sex at the exact same time, so one of us is usually trying to get the other one into the mood. We’re never aggressive about it, but I know that when I’m the one being cajoled, I can sometimes feel little moments of discomfort. Where’s the line? I want to make sure I never do it and that no one is doing it to me.”

A: Thanks for the question! It’s a really important one to discuss. Of course, sexual coercion can sometimes be completely obvious, like when aggression or violence are at play. But coercion can also be much more subtle. There’s not always a crystal-clear line, because what feels like coercion to one person might not feel like coercion to another. Or something could feel like coercion in one moment or context, but feel fine in another. Nonetheless, here are 10 rules for healthy sexual initiation, with examples of dos and don’ts.

1. You Have To Give Your Partner A Choice

The most basic aspect of sexual initiation is that it’s a request. When you initiate sex with someone, you have to understand that you’re asking them to be intimate with you. You’re not demanding, pushing, or manipulating. It’s fine to make an attempt to get your partner into the mood by doing things like offering to give them a massage or go down on them, but again, the bottom line is that it’s their choice. “No” has to be a perfectly valid and acceptable answer. Things like, “come on, you know you want to” or, “you just like being a tease” are not OK.

Once your partner has given you their response, don’t push them to change their mind. For example, let’s say your partner tells you they aren’t feeling well and aren’t up to having sex. You don’t want to say anything like, “I’ve had a really hard day and I need to blow off some steam. Can you just do this for me?” Even something like, “are you sure?” can come off as overly pushy.

I’ve been focusing on “no” thus far, but the flip side of the initiation coin is making sure you hear a “yes.” A lack of a no is not a yes. An “umm” is not a yes. Silence is not a yes. Only a yes is a yes. This is especially important if you’ve just started seeing someone. When you’ve been with a partner for a while, you know how to read each other better — but still, it can be incredibly sexy to ask for consent, even when you’ve been together for years! It’s just good practice.

Taking it a step further, it’s good to make sure that you’re getting a “yes!”, not just a “yes.” You want your partner to not only consent to whatever you’re doing together, but be excited about it. This is one of the best ways to ensure that you’re not veering into coercion territory. If your partner feels excited about being intimate, they’re far less likely to feel like they’re being pressured or manipulated.

5. Pay Attention To Your Partner’s Response

It would be nice if initiation was as simple as “yes” or “no”, but of course, life is far more complicated than that. Sometimes we say “yes” when we really mean “no”. Sometimes we don’t feel fully comfortable saying “no,” or we don’t think we have a choice. Sometimes we say “yes,” then change our minds. You’re not ever going to be a mindreader, but you can do your part by trying to pay attention to how your partner responds to your initiations. What is their body language saying? What kind of facial expression do they have? What is the tone of their voice like? If you sense any sort of nervousness, hesitation, anxiety, or fear, take a moment to say something like, “it seems like something’s up. Do you want to talk?”

One of the ways people veer into coercion territory is by making their partners feel guilty for saying “no.” For example, “Really? But it’s been weeks since we last had sex.” Some people preemptively guilt their partners before they’ve even had the chance to respond. For example, “remember that you already promised me you’d give me a blow job today? You’d better keep your word.”

Some couples really enjoy playing around with power dynamics. You might love it when your partner wordlessly pushes you up against the wall and starts tearing your clothes off. You might like teasing your partner by saying “no” when you really mean “yes”. Or you might enjoy enacting rape fantasies with your partner. That’s all perfectly fine, but you need to have a conversation beforehand about the fact that you’re going to play with power dynamics in your relationship. You have to agree on specific times that you’re going to roleplay, and make sure you have safewords in place. Or you have to agree that you’re going to have a D/s relationship in place for a certain period of time, with specific rules and guidelines. These aren’t things that you can just spring on your partner as a surprise.

If you’re in a relationship, you’re going to have certain dynamics come up around sex. One of you might want sex more often than the other. One of you might take on the initiator role more frequently. There are going to be times where you feel self-conscious, vulnerable, hurt, unattractive, or unimportant. You’re going to need to have conversations about those dynamics; that’s just life. But those kinds of conversations should happen separately from sexual initiation. They shouldn’t be used as a way to convince your partner to have sex in that moment.

For example, if your partner turns you down, it’s not cool to say something like, “You haven’t wanted to have sex with me for weeks. I guess you don’t love me anymore” or “it feels like you’re not attracted to me anymore.” It’s a subtle but extremely important difference.

You’re not out in the clear once you’ve made your initiation. Coercion can happen after the initial request too. It’s perfectly fine to be disappointed if your partner turns you down. But it’s not OK to pout, whine, or stonewall. Saying something like, “I’m bummed, but I’ll get over it in a bit” is fine. “I don’t want to talk to you right now” is not.

Perhaps one of the simplest ways to prevent yourself from being coercive is to try putting yourself in your partner’s shoes. Try to treat others the same way you would want to be treated. If you could imagine yourself feeling pressured or guilted by your actions, take a moment to rethink your initiation and try something different.

Again, keep in mind that there are no set in stone rules here, and you’ll need to navigate initiation with each new partner you have. But these guidelines should give you a great start.