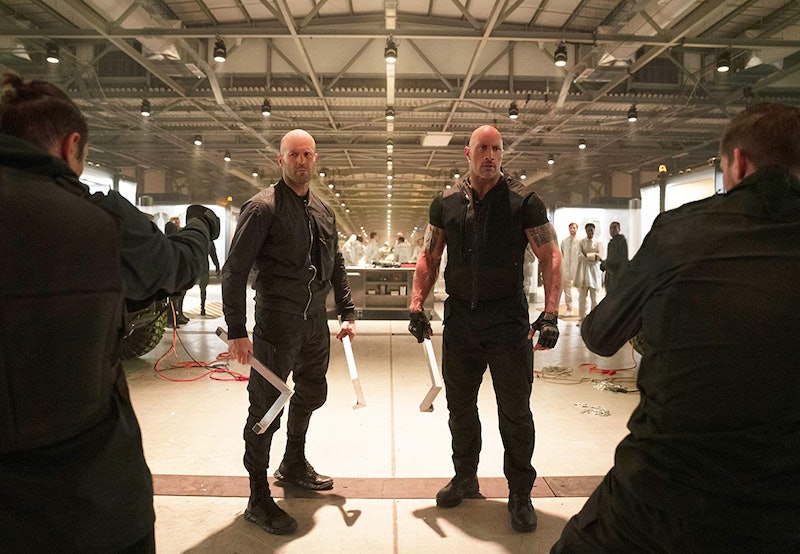 The first Fast & Furious spinoff, Hobbs & Shaw premieres on Aug. 2 and is just as fast, furious, and action-packed as the previous eight movies from the film franchise. The rest of the main characters are elsewhere as federal agent Luke Hobbs (Dwayne "The Rock" Johnson) and former Fast villain Deckard Shaw (Jason Statham) team up a mission of their own. The unlikely pair is tasked to work together as as they try to get ahold of a deadly virus designed to eliminate most of humanity before evil tech company Eteon's superhuman soldier Brixton (Idris Elba) is able to obtain it. And while the film is a lot of fun with its chases, beautiful shooting locations, and visual effects, it isn't absolutely necessary to watch Hobbs & Shaw in 3D.

Now this isn't to say that you shouldn't watch the spinoff movie in 3D — that is, unless you get motion sickness easily. It's just that the stars of the show aren't the visual effects. And despite being part of the Fast & Furious franchise, which all began with street car racing, the majority of the action scenes in Hobbs & Shaw involve fist and gun fights. There are chases, but the film as a whole has less car-heavy stunts than the main series.

Still, there are scenes that still involve Fast's signature car chases, with Brixton pulling off some killer tricks on his high-tech motorcycle, Shaw showing off his dangerously daring drifting skills, and the Hobbs family coming in with their tactical driving techniques. At one point, Shaw also manages to make a jeep jump over to the next building, escaping immanent death via explosion — which is definitely a moment worth seeing in 3D.

But the rest — fists flinging towards faces and bodies dropping to the ground — isn't necessarily the type of action made for the 3D effect. And the most enjoyable scenes from the movie don't even involve jaw-dropping stunts. It's the humor, the surprising cameos, and the chemistry between the characters of Hobbs and Show that really make it what it is.

The whole film, in the first place, was founded on the noticeable dynamic between actors Johnson and Statham. As the Associated Press reports, in an interview with Entertainment Weekly, Johnson said of Hobbs & Shaw, “I’m really happy that we were not only be able to crack the creative and really lean into the relationship and chemistry — the biting chemistry between myself and Jason Statham — but I think that also you find out that it’s something the fans have been wanting for some time now.”

And in an interview with Entertainment Tonight Canada, Johnson even claimed that Jumanji co-star and real-life bestie Kevin Hart feels jealous of his and Statham's budding bromance. "He's just jealous by nature," the actor joked. "I tried to tell him 'Don't be jelly. Love is love.'"

Whether you want to see Hobbs & Shaw in 3D is your prerogative, but it won't really make that much of a difference. Hobbs and Shaw's brotherhood and the Fast theme of family shines through, with or without the special glasses.