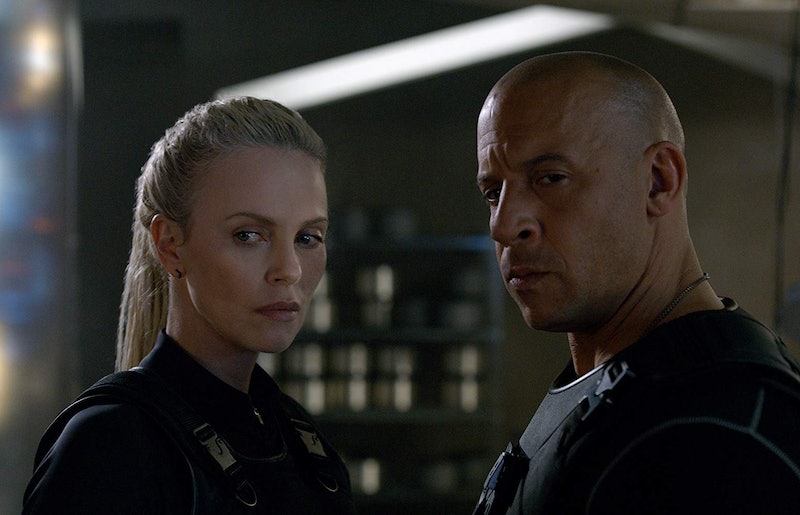 The Fast & Furious film franchise drops its first ever spinoff movie, Hobbs & Shaw, on Aug. 2. And while this movie is a slight departure from the franchise's usual characters and linear storyline, it does continue a thread or two from the last Fast movie. You may need a recap of the family's most recent outing before going to see Hobbs & Shaw; luckily, The Fate of the Furious is available to stream on multiple online platforms.

It's unfortunately not streaming for free with subscription at the moment, but as of right now, you can either rent or buy the film on Amazon Prime Video, YouTube, iTunes, Google Play, and Vudu. In the eighth installment to the Fast series, Dom (Vin Diesel) goes rogue and betrays his own team, all because of threats from cyberterrorist Cipher (Charlize Theron). Letty (Michelle Rodriguez) and the rest of the Fast family try to bring their leader back home — with Luke Hobbs (Dwayne "The Rock" Johnson) and Deckard Shaw (Jason Statham) to back them up.

In Hobbs & Shaw, the two team up again, in a mission away from the rest of the main characters. Meanwhile, the plot for Fast & Furious 9 has yet to be revealed, but in an interview with Screen Rant, director F. Gary Gray spoke about the possibility of branching the film franchise out to space. "Listen, I wouldn't rule anything with this franchise," Gray said. "When I read submarine [in The Fate of the Furious] I'm like 'OK, anything's possible'. You never know. I haven't read 'Dom on Mars' yet but again, you just never know."

The possibilities seem endless for Fast 9, except as it pertains to the actors in the film. In an interview with MTV News in January, Johnson explained that he and Statham probably won't be involved. "As of now, we're not in Fast 9 because they're getting ready to start shooting. But who knows with Fast 10 down the road, you never know," he said.

Meanwhile, Michelle Rodriguez, who was previously unsure of her participation in future Fast & Furious films, confirmed at the Bloomberg Future of Equality Summit that she agreed to sign on to the film after ensuring that the filmmakers hired a female writer. "I felt like there was not enough of a female voice in the franchise," Rodriguez said during the summit.

That leaves plenty of room for a new addition to the Fast cast: actor and former WWE wrestler John Cena. Universal Pictures confirmed the news with Deadline in June. “Literally, I’m surrounded by a group of people who are better than I am and such skilled people with so much experience, so what a great environment to learn from," Cena told Entertainment Weekly. "It really is a tremendous opportunity.”

No specifics have been given out about Cena's character, except that he's playing a "badass," according to Deadline. And not much else has been revealed about Fast & Furious 9, except for the set premiere date of May 22, 2020. For now, you can stream The Fate of the Furious as a Hobbs & Shaw refresher, and maybe watch the other seven movies while you're at it.

More like this
Nicola Coughlan Shared A Lady Whistledown Excerpt From ‘Bridgerton’ Season 3
By Grace Wehniainen, Alyssa Lapid and Sam Ramsden
The New Bachelor Will Be Announced Next Week & Here Are The Top Contenders
By Grace Wehniainen
Margot Robbie Breaks Her Silence On *That* Viral 'Barbie' Moment
By Maxine Harrison
A New 'And Just Like That' Table Read Pic Confirms A Key Character's Return
By Jack Irvin and Grace Wehniainen
Get Even More From Bustle — Sign Up For The Newsletter