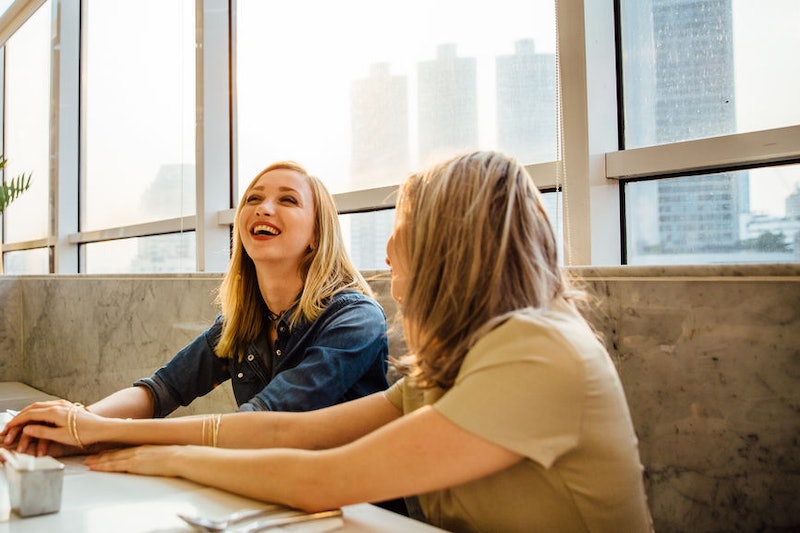 What you earn can be a deeply personal topic. With many people developing side hustles to supplement their main income and sites like Etsy and YouTube meaning monetising hobbies is a possibility, it may be a little bit tricky to work out what the person you're dating earns. But should you tell your date your salary?

Childhood, family life, work, and friends are all topics of conversation during dates, but I have a certain reluctance to tell the person I am dating what I earn. I'm not even sure why. However, a survey conducted on behalf of Wells Fargo Propel Card found that 54 percent of millennials would rather let their partners read their texts and emails than let them see their credit card statement. For so many people, including myself, finances are an important, everyday consideration — it's something we think about all the time. Yet somehow it still feels like salary and debt is too much of an intimate conversation to have on a first date. But is there ever a good time to reveal to your partner how healthy (or unhealthy) your bank account is?

So, millennials are more willing to handover their sacred Netflix and Amazon Prime passwords before they're willing to divulge what they bring home from work every month? It appears so.

Speaking about the survey to the Telegraph, Managing Director of Noddle Jacqueline Dewey, said: "As a nation we still shy away from talking about money, even with our spouse or partner.”

So, are there benefits to being open and honest about your money situation from the start? Broaching the topic with a romantic partner can be tough, especially at the beginning, but My Fab Finance Founder Tonya Rapley revealed one solution that might work to Elite Daily: "If you're not serious with each other yet, set parameters and expectations for the types of dates you'll go on and what's expected of each partner (as far as their financial contributions go)."

Being on the same page as your potential partner is crucial if things are going to progress. While, at the start, this may only stretch as far as liking the same films, hanging out at the same coffee places, and having the same sort of ambitions, there is no getting away from the fact that money is important. Maybe income isn’t first date chat (I for one don’t think I am quite brave enough to broach the topic after meeting someone for an hour), but when you start looking at paying for holidays, renting a flat, or divy-ing up bills, it might be time to sit down with a cup of tea and your spreadsheets and reveal all.