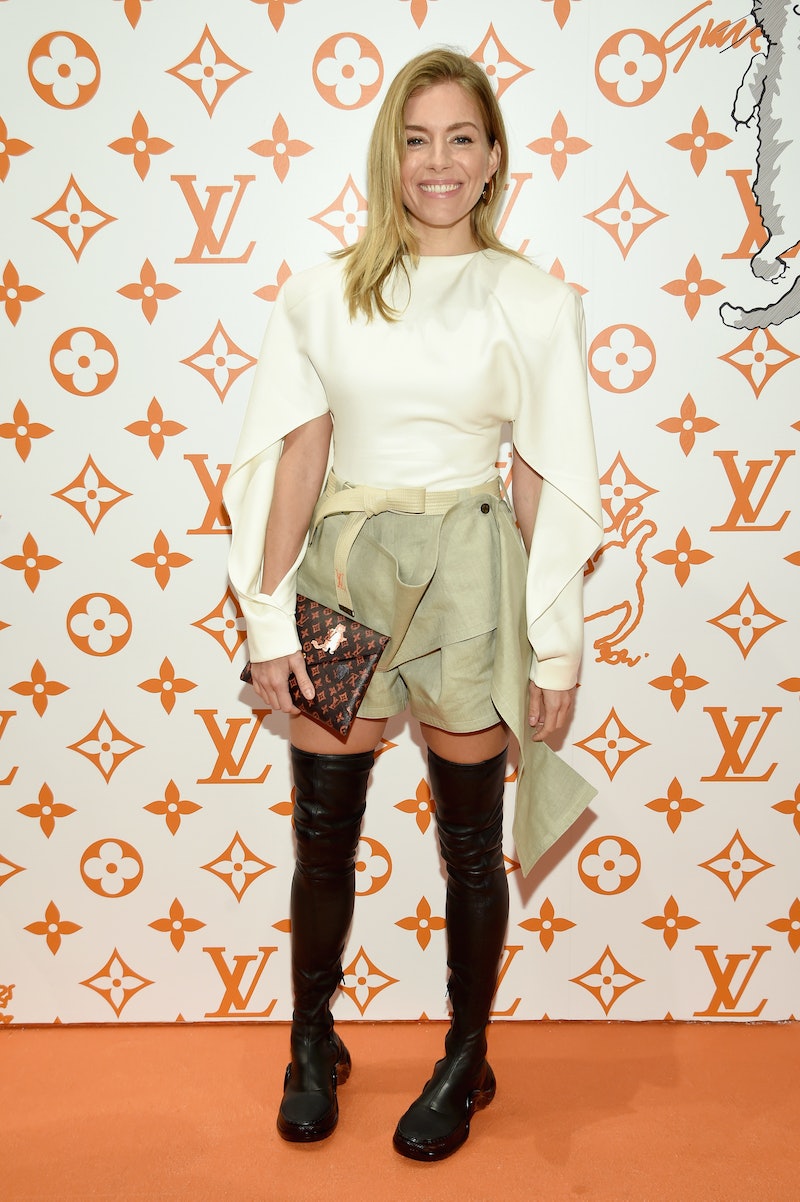 This is a case of fashion recycling at its absolute best. Actor Sienna Miller re-wore her 2006 Met Gala dress on a night out in December 2018 and we are so here for it. While the Met Gala gowns have evolved into utterly sweeping sartorial displays in recent years — think Rihanna as the pope, Rihanna as a pizza, Katy Perry nearly taking flight with angel wings, and Taylor Swift as a berry-lipped and futuristic punk rocker — Miller's mod and metallic mini dress was much more low key.

It just wasn't as statement-making or overly "themed" like many Met Gala gowns of recent years. But it is and was stunning, glam, and sexy AF.

Who What Wear noticed the actor had pulled the dress out of her closet and added it into rotation while out and about on a cold London night a dozen years later.

The liquid gold-sequined Burberry dress with an empire waist and a black bow sash was the perfect date night or night out dress. The frock was designed by Christopher Bailey.

I always think it's an utter shame when gorgeous gowns and darling dresses are worn by celebs once — maybe twice — and are then relegated to storage, never to be seen or styled again.

It's ace to see a dress such as this get a new fashion lease on life.

While the micro mini could have showed off legs for days, Miller opted to wrap her legs in tights and show off her bare shoulders and arms instead.

She went with bronzed skin, smoky and darkly-rimmed eyes, a messy, center-parted pony, and pink lips. She was probably still dating Jude Law at the time, too.

Fast forward to 2018. Even 12 years later, the dress is still wholly chic. That's because it remains a timeless silhouette and style. This past December, Miller paired the frock with a black coat to keep warm and stylish and the same tights and heels combo. This time, she rocked open-toe, ankle-strap velvet heels. It was a classic presentation that looks as chic in 2018 as it did in 2006.

Miller's hair fell around her face in bedhead-y waves while her lipstick was more of a berry pink and her skin was much less bronzed. She added a green satin bag to the ensemble.

Miller loves the tights and black heels look and she returns to it often. The actor was known for her "boho chic" look in the '00s where she effortlessly mixed eras and elements in a single outfit. However, her 2006 and 2018 Burberry dress was trend-free.

Champagne Sequin Dress
Lulus
This fast fashion sequined shift is similar to Miller's if you want to rock this look. It comes in sizes XS to XL.
1.State Sequin Shift Dress
Nordstrom
This sparkly 'n' sequined ombre shift comes in 1X and 2X.

Just add tights and Mary Janes and you're all Sienna-ed out.

Big ups to Miller for engaging in a some fashion recycling. High-end resale and resale in general have become such a huge fashion trend. A celeb re-wearing a beautiful dress is an awesome take on the concept.