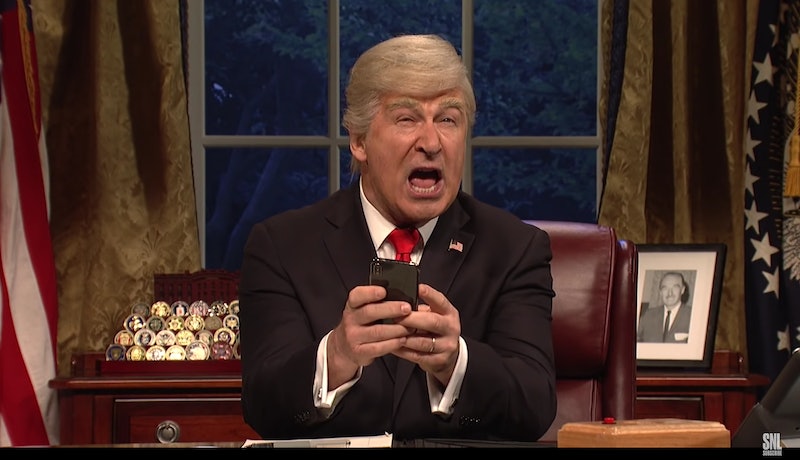 In the show's cold open, the trio offered a parodied mashup into the very different ways that Mueller, Barr, and Trump may have characterized the reported findings of an investigation into Russia's meddling in the 2016 election and alleged ties to the Trump campaign.

"I am submitting these 380 pages," De Niro's Mueller said, reading from a letter to Barr in which he discusses his report.

"I am writing almost four pages," Bryant's Barr added, as he crafts a summary of the report for Congress.

The camera returns to De Niro, who echoed the real findings of the Mueller report by noting his team had "not drawn a definitive conclusion" on the charge of obstruction of justice.

"But I have," Bryant's Barr cut in. "And my conclusion is Trump's clean as a whistle."

In regards to allegations of conspiracy or collusion, De Niro's Mueller said they'd found "several questionable instances involving the president's team," but noted his team could not "prove a criminal connection."

"No collusion, no diggity, no doubt," Bryant's Barr summarized.

"Russia, if you're watching, go to bed. Daddy won," Baldwin's Trump said after celebrating Barr's summary with an air horn.

Barr — the real Barr that is — announced March 22 that, after nearly two years of investigation, Mueller had handed in his report on Russia's election meddling. He later provided Congress with a brief summary of the report's "principal conclusions" in a letter that was also provided to Bustle by the Department of Justice. Barr told Congress that Mueller's investigation "did not establish that members of the Trump Campaign conspired or coordinated with the Russian government in its election interference activities."

On allegations of obstruction of justice by the president, Barr said Mueller had "ultimately determined not to make a traditional prosecutorial judgement" but that he and Deputy Attorney General Rod Rosenstein had concluded there was not sufficient evidence for charges.

According to CNN, President Trump claimed Mueller's report was "a complete and total exoneration" for him, despite Barr having told Congress otherwise. In his summary of the report's principal conclusions, Barr noted Mueller had said that "while this report does not conclude that the president committed a crime, it also does not exonerate him."

On SNL, De Niro's Mueller said he hoped his full report would be released to the public barring "a few redactions."

"We're going to black out everything except for the words 'no' and 'collusion,'" Baldwin's Trump said, adding that Mueller's investigation would be "the only thing I will talk about for the next four years."

According to The New York Times, Barr has said he hopes to have a redacted-version of Mueller's report made public by mid-April.