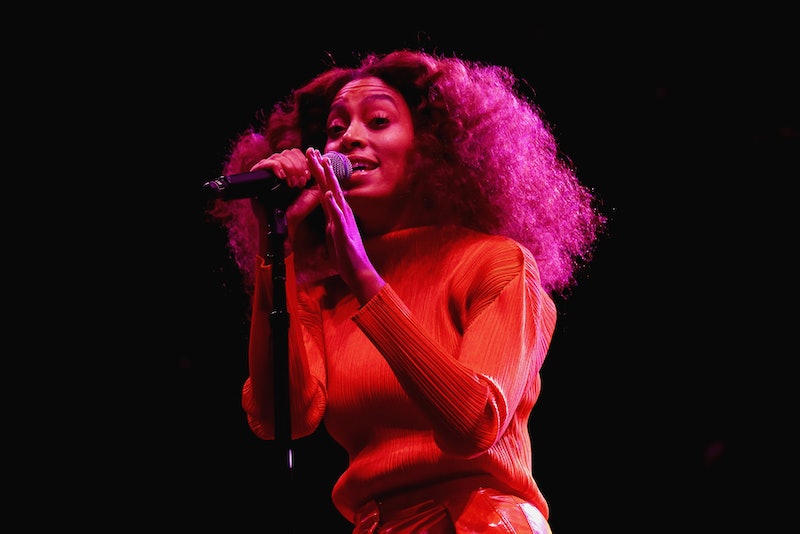 Out of all the lessons Solange's 2016 award-winning album A Seat At The Table instilled in listeners, being yourself unapologetically should be at the top of the list. All of the hard work and truth-spilling wasn't in vain for the artist either, as Solange is being honored with Billboard's 2017 Impact Award for Women In Music. According to The Hollywood Reporter, the Impact Award recipient is typically presented to a woman who "uses her voice to empower and develop new leaders of tomorrow through their on-air persona, platform, and philanthropic efforts to inspire social change across the masses." And the artist's catalogue has personified just that throughout the years.

Solange is known in the industry for being a misfit. From her fashion styling to her music, it's evident that she looks to the musings of '60s black funk and soul for inspiration. And during a time where it seems as though the masses are more in tune with trendiness, Solange's creative appeal definitely sticks out like a beautiful, sore thumb. But according to the iconic Interview Magazine piece by Beyoncé at the top of 2017, this nonconformist behavior is nothing new. Solange has always marched to the beat of her own drum. So, it only makes sense that artist was drawn to creating her own lane in the industry.

And that doesn't just go for her own music, of course. She's left an imprint on a slew of other's music as well, penning songs for the likes of Kelly Rowland, Janelle Monáe, and Beyoncé over the years. Everyone seems to be inspired by Solange's unapologetic vulnerability shown through her art — including the fans who were touched by Solo's latest release A Seat At A Table. Being honored with the 2017 Impact Award should serve as just the icing on the cake for Solange, since her listeners have already expressed to her how much her music has empowered them throughout her career.

A Seat At The Table, specifically, has left a substantial impact on black women and black culture. From "Cranes In The Sky" to "Don't Touch My Hair," and "F.U.B.U." to "Borderline (An Ode To Self Care)," Solange sang of the many micro-aggressions and challenges that black people have notoriously faced for decades. But perfectly mixing those complicated feelings of displacement, discrimination, or silencing with her sweet falsetto had a residual effect, slightly different than that of a documentary or think-piece.

One of the very reasons A Seat At The Table is revolutionary is because its lessons transcended classrooms and panel discussions. Solange's teachings are danced to in clubs, and sung along to in concert halls and on music festival lawns. They're jammed to in cars, or through headphones during long commutes. Her candor is plastered on t-shirts, recited as mantras, and even tattooed on limbs — lasting forever. Solange's truth is being used to connect people to one another, far beyond the African diaspora that the messages were initially created for.

And while Grammy recognitions and Soul Train Awards are worthwhile, knowing that her art has influenced generations to own and appreciate their blackness holds more of a ranking, according to the singer. While talking to Beyoncé for the Interview Magazine piece, Solange said,

"I just feel so much joy and gratitude that people have connected to it in this way. The biggest reward that I could ever get is seeing women, especially black women, talk about what this album has done, the solace it has given them."

By just being herself, Solange has also inspired her older sister and multi-award-winning artist Beyoncé to be brutally transparent in her work as well. Beyoncé's critically acclaimed visual album Lemonade brought fans into the artist's very intimate dining room and set another, much higher, standard for creators alike. Seeing the impact that Beyoncé's personal trials, setbacks, and moments of weakness had on fans, black women specifically, was astounding.

Through her music, Beyoncé was able to show that though being celebrated as one of the greatest entertainers of all time has its perks, she's not immune to heartbreak. It was something new for Bey — fans are used to the entertainer keeping her family life private — but her vulnerability brought more humanity to her larger than life persona, and her efforts were wildly appreciated by listeners.

Beyoncé talked about being enamored with Solange's ability to shamelessly hold no bars while interviewing her younger sibling for the Interview write-up — knowing that with her sister's determination, free-spirit, and yearning to follow her gut was "'going to be something super special,' because you always seemed to know what you wanted."

It definitely has to be scary to be so forthcoming about personal setbacks or misfortunes, especially when the current trend seems to be having it all together. Solange definitely talked about "breaking out in hives" right before A Seat A Table's release in the Interview article. "It was terrifying," she said. "This was going to be such an intimate, up-close, staring-you-right-in-the-face experience, the way people would see me and hear me." But in the end, it was all worth it. Solange nurturing that same childhood discernment that she and Beyoncé talked about in the interview, and fearlessly walking into her truth ultimately worked in her favor — catapulting her to the grand stage that she sits upon today.

As her latest award proves, one doesn't become an influencer by following the pack. Solange refused to bend into the mold society wanted to put her in, and instead, lived her life boldly. Her art is a reflection of her own beautiful journey to self-discovery. And that's the greatest part to this whole thing.