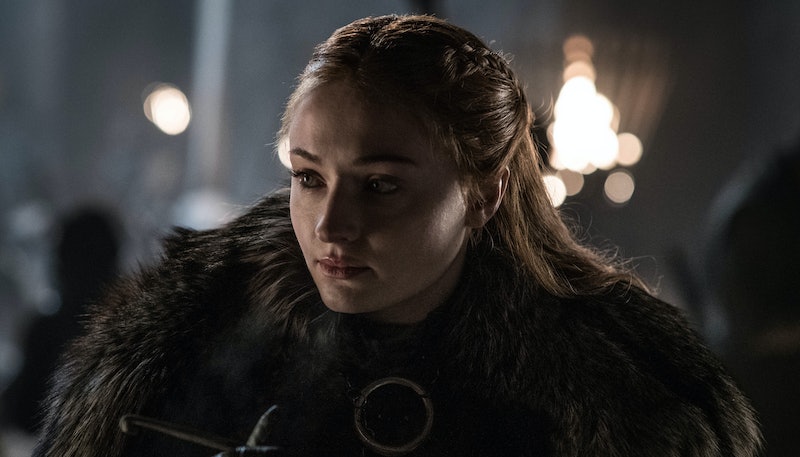 Sansa Stark isn't gone and she certainly won't be forgotten anytime soon, but the actor who plays her is ready to say goodbye for good. This might be hard for Game Of Thrones fans to hear, but Sophie Turner doesn't want a Sansa Stark spinoff for this very good reason.

While Sansa may be ruling over Winterfell as the new Queen of the North, something fans really wanted, Turner is ready to move on to other projects. And honestly, after a decade, who wouldn't want to try something new? Especially, now that Sansa's probably the happiest she's ever been. "I feel like if I played her again it would be just be more trauma," Turner said and she'd like to just see Sansa be happy for once. And who can really argue with that?

It's probably a good thing Turner isn't interested in a Sansa spinoff since HBO has all but put the kibosh on all of that. Following the finale, when asked about the rumors of a potential Arya spinoff, the HBO programming president Casey Bloys told The Hollywood Reporter in no uncertain terms, "Nope, nope, nope. No."

Like Sansa, Arya's ending is a rather happily open-ended one. Arya (Maisie Williams) sails off in the finale hoping to discover what exists beyond the western borders of Westeros, something fans would likely want to discover, too. But Bloys continued to reiterate that there really are no Game Of Thrones spinoffs in the works. It's something the network decided long before the finale, but Bloys still feels like that's the best choice for the series.

"I understand where that comes from, I totally get it," he told Deadline on May 21 of fans wanting more GoT, but he feels it's best if the show is eight seasons and eight seasons only. "I want to leave it as it’s own work of art and not have shows directly, having Arya do that. I think it’s best to try the prequels in other areas of George’s massive universe — just feels like the right thing to do," he continued, "let the show stand on its own."

For now, HBO is working on a Game Of Thrones prequel starring Naomi Watts as a mysterious character who's "a charismatic socialite hiding a dark secret." To be fair, though, everything about this show is still rather mysterious. According to the HBO synopsis of the show, slated for next year, "Taking place thousands of years before the events of Game of Thrones, the series chronicles the world's descent from the golden Age of Heroes into its darkest hour."

Apparently, what fans think they know of Game Of Thrones, might not be true, that is if they believe HBO's description of the show, which states, "From the horrifying secrets of Westeros' history to the true origin of the white walkers, the mysteries of the East, to the Starks of legend… it's not the story we think we know."

However, now that Game Of Thrones is officially over, fans might start to learn more about this prequel that might make them think of the original in a whole new way. Maybe just maybe it'll help get over the news that there isn't a Sansa spinoff in the works.