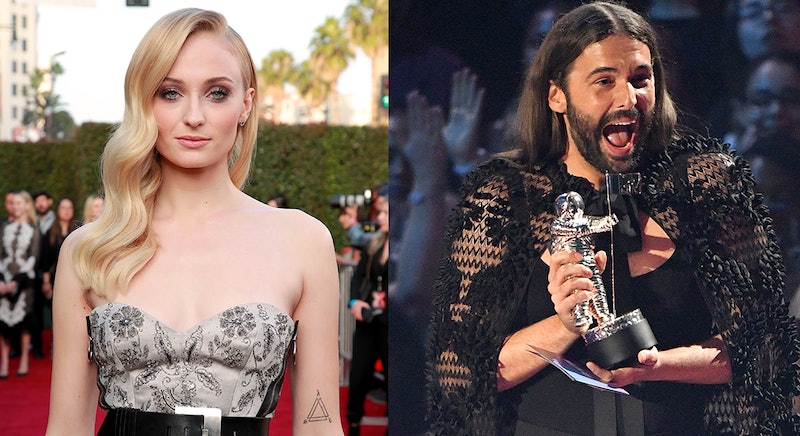 The host of Gay of Thrones and the Queen in the North are obsessed with each other, and I'm basically a direwolf howling in delight. Sophie Turner and Jonathan Van Ness met at the 2019 MTV Video Music Awards on Monday night, and fortunately, Entertainment Tonight caught the moment on camera. When the Game of Thrones actor realized she was only a few feet from the Queer Eye cast member, she wailed, “Jonathan Van Ness!” He did the only thing a person can do when the Queen in the North seems so genuinely delighted to see them: He screamed, pretended to run away, gave her a hug, and told her he’s “so happy for [Sansa Stark]’s ending” on Game of Thrones. They embraced a few more times and exchanged “I’m obsesseds” and things of the sort.

Van Ness’s Game of Thrones fandom is well-documented. In 2013, the first episode of Funny or Die’s Gay of Thrones, a web series where a guest/“client” would plop down in his salon chair and chat about what “Baby Kill Bill” (Arya), “Christina Aguilera” (Daenerys), “Evil No-Volume Carol Brady” (Cersei) and other characters were up to in that week’s episode of the HBO fantasy series premiered. It has earned three Emmy nominations, and it is up for Outstanding Short Form Variety Series at this year's Primetime Creative Arts Emmy Awards.

Whew, those Emmys are coming up quick. After he met Turner at the VMAs, Van Ness shared some photos of their interaction on Instagram and wrote, “I met Sansa Fierce @sophiet & honey, speaking of #GayofThrones... Emmy Voting Ends this week #shortformvarietyseries slay us with that #emmy @televisionacad #fyc #vmas.”

Turner's show happens to be up for a few awards, too. She and three of her GoT costars are up for Outstanding Supporting Actress in a Drama Series at the 71st Primetime Emmy Awards. The show has a total of 14 nominations this year.

Whatever does or does not happen at the Emmys, we are all winners after watching JVN and Sansa fawn over one another.

More like this
Gwendoline Christie’s Partner Is Part Of Royal Family History
By Parry Ernsberger and Sophie McEvoy
Kim Kardashian’s “Gym Time” Video Features A Bikini & Thigh-High Boots
By Grace Wehniainen
What’s New On Netflix: 'Never Have I Ever' & 'Indian Matchmaking' Return
By Arya Roshanian
Everything To Know About The HBO Max & Discovery+ Streaming Service Merger
By Brad Witter
Get Even More From Bustle — Sign Up For The Newsletter