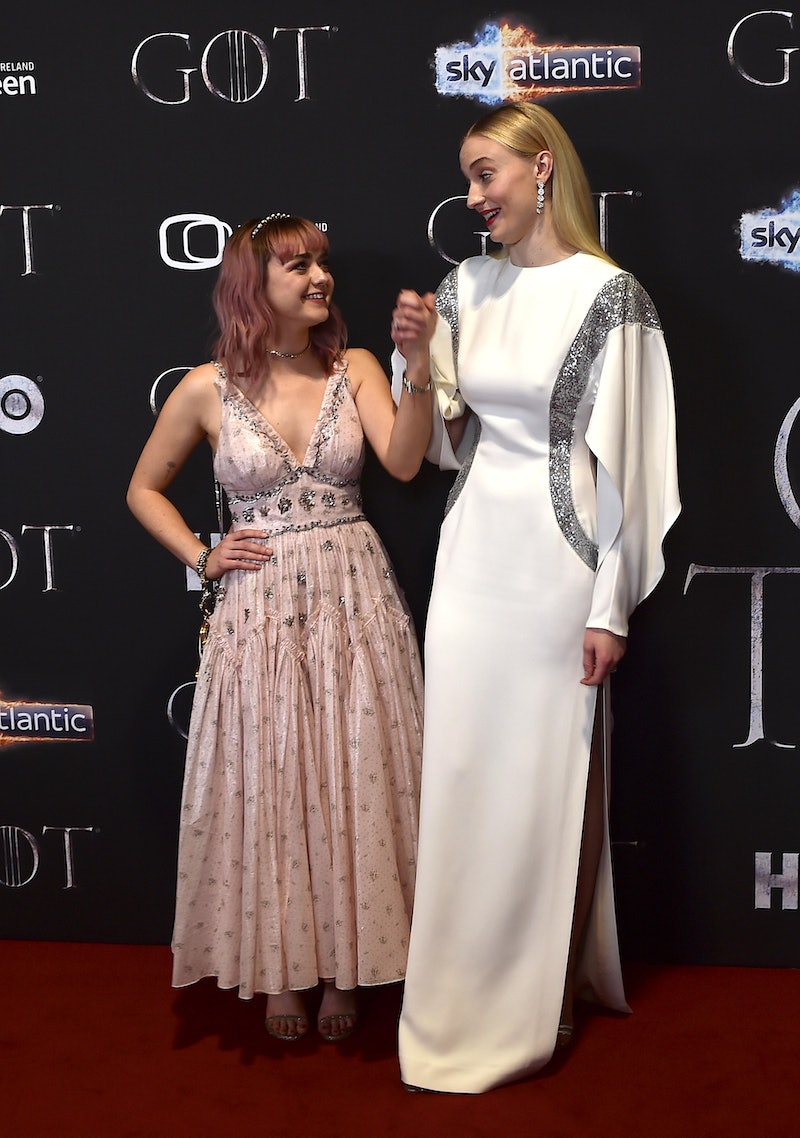 The Stark sisters' time might be up, but Sophie Turner and Maisie Williams hope to make a movie together one day. In a recent video interview for Vogue Paris, Turner ate dinner with her Dark Phoenix co-star Jessica Chastain and elaborated on her future goals, which included potentially making a movie with her Game of Thrones sis and best friend. The best part? The proposed film would be about their unique real-life friendship.

Turner hasn't tried her hand at writing and producing just yet, but she plans to, and thinks that her special relationship with Williams offers the perfect opportunity and unique story. "My best friend Maisie, she and I have a very intense friendship, a friendship that I haven't had with any of my other girlfriends before," she told Chastain. "We felt like we wanted to write a movie about a friendship where it's kind of like you're soulmates, but you're friends and it's like this beautiful connection but it can also be quite destructive."

There are no official details on the project just yet, but Turner said she did recently purchase a screenwriting book to begin practicing. "I bought a screenplay writing book!" she said. "To teach myself. Because I can't write well, but I want to. But I'm just not talented enough."

That claim is definitely debatable, and with Williams' help, the two of them could certainly create something amazing. Their chemistry is hard to match, not to mention, they've had the opportunity to learn from the best, they grew up together, and have always been there for each other. They even have matching tattoos commemorating the day they officially became Game of Thrones cast-mates and sisters.

"Sophie knows too much about me to not be my friend," Williams told Glamour UK in February. "I can't tell you the amount of times Sophie said, 'Go to therapy' before I actually did. She really helped me through some messy break-ups and some friend break-ups. Whenever I'm like, 'I need help! This is bigger than anything I can sort out on my own,' Sophie is my point of call."

Turner recently wed Joe Jonas at a post-Billboard Music Awards Las Vegas elopement, and has announced that they will be holding a larger, more formal ceremony soon where Williams will be one of two maid of honors, according to Entertainment Tonight.

There's no doubt that Williams will take those duties very seriously. "Maisie is definitely my protector and I'm hers, too," Turner told Glamour UK. "I know if anything happened — especially if it was on Game of Thrones, which it never, ever would — she'd go crazy and protect me… Maisie is my strong home."

Both of them are working on who they want to be post-Game of Thrones, and perhaps this potential project could lead them in the right direction. "I'm petrified, it's a lot for me, but I'm excited," Turner told Entertainment Tonight about her next steps in April. "I'm excited for the world to see the next chapter of my life, post-Game of Thrones and I feel like a new woman."

Sansa and Arya would be proud.