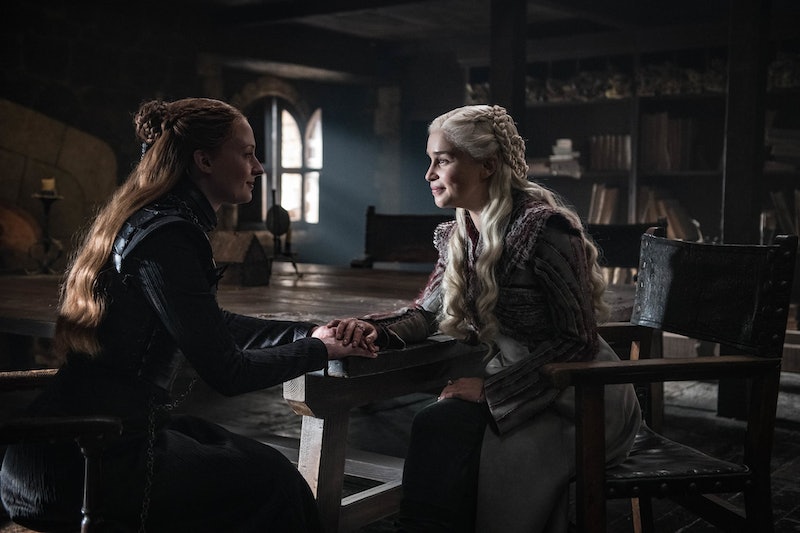 One of the few silver linings about the current state of the world is that, as the tedium of self isolation truly begins to marinate, many celebs are taking to their Instagram accounts to pass the time. Star of Game Of Thrones Sophie Turner agreed with a fan's suggestion that Sansa and Daenerys would have made a great duo.

Oh. My. God. It's good to know that Turner is on board with basically everybody else on this. Although let's be real, she has to mean Daenerys pre the final season right?

Turner did an Insta stories Q&A, and one of the fan questions she answered stood head and shoulders above the rest. "Do you wish Dany & Sansa would have been a bad b**** power duo?" Using a photo of her sock as the backdrop, she replied in bright pink letters "That would have been awesome." And I'm sorry but this is the kind of fan fiction that the world needs right now.

Anybody who has watched the show will be well aware that Sansa and Daenerys weren't exactly bosom buddies. In actual fact, they were more like frenemies, at best.

So what set them apart? Why a man of course. Sansa's adopted brother (actually her cousin) and Daenerys lover (actually her nephew — I know, gross) Jon Snow. You'd think that considering they both have such flipping complicated relationships with the guy they'd at least have a little compassion for each other no? Nah, because this is Game of Thrones.

Alongside backing feminist fan fiction, Turner also asserted that she prefers chocolate Bourbons over custard creams and admitted her favourite work of art is her husband Joe Jonas. Although I'm utterly horrified by the former, the latter is seriously adorable and a reminder that, even if we can't have Sansa and Dany, Sophie and Joe are a pretty decent substitute.