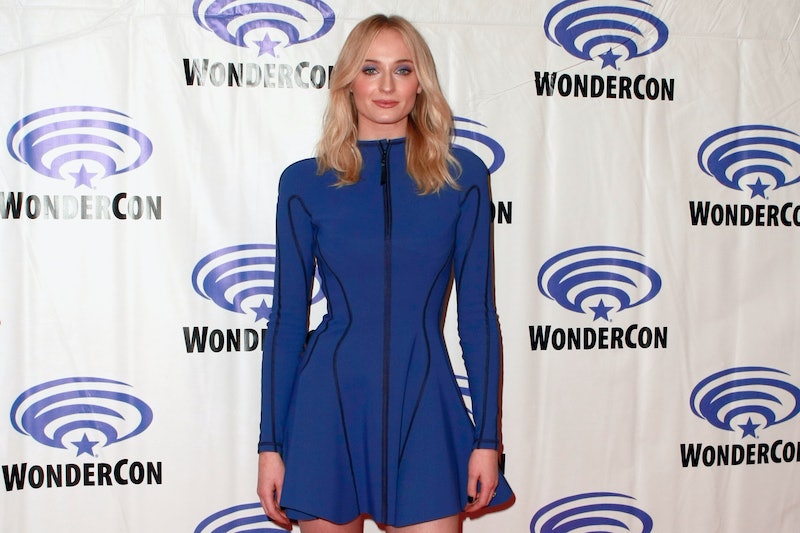 There are quite a few people hoping for Sansa to take the Iron Throne — and they made sure that she knew just how much they were rooting for her. On Friday, April 5, during a Jonas Brothers concert at a college bar, Game of Thrones fans chanted "Lady Stark" at Sophie Turner from when she appeared onstage alongside her fiancé.

At some point during the Jonas Brothers' show at Penn State's Champs bar, Turner stepped out onto the stage to support Joe Jonas, and the crowd gathered greeted her with a reaction worthy of the Lady of Winterfell. "We are.... @champspennstate is my favorite college bar in America," Turner captioned an Instagram video of the crowd chanting "Lady Stark" while she nodded proudly at the camera. And even though she appeared to steal the show by stepping onstage, Jonas seemed proud of the reaction to his fiancée by commenting, "My Lady Stark ❤️❤️" on Turner's post.

Naturally, the response to Turner's big moment delighted Game of Thrones fans on social media, many of who began tweeting about how thrilled they were to see Sansa getting the respect and attention she deserved. "Sophie Turners insta of a college bar yelling “Lady Stark” is a perfect way to get fired up for next Sunday #GoT" Twitter user @camilledesumma wrote, referencing the Season 8 premiere of Game of Thrones.

The "Lady Stark" chant is far from the first time that Turner has won the hearts of the Internet with a joking Instagram post; in late March, the actor attended a New York Rangers hockey game with Jonas, and when she was featured on the jumbotron, Turner decided to chug her glass of wine to the cheers of fans in the arena.

"Send it for the starks," Turner captioned a video of the feat, along with a very appropriate Direwolf emoji. "Wow inspiration for 2020 and beyond," Drake commented on the video, while HBO's official Instagram account wrote that they were "Shattered and season 8 hasn’t even started yet."

Turner will give fans even more reasons to root for Sansa in the show's final season, as she told British Vogue in March that when all of the dust settles, "most of the people coming out on top are women." Her best friend and costar Maisie Williams echoed that sentiment, telling the magazine, "I’d say the key players this season are all female, which is why it’s so amazing we’re doing this shoot today."

While Turner has — naturally — kept any hints about the show's final season under wraps, she did tell Rolling Stone in their March cover story that "I feel very satisfied with the ending of the entire show. Every story arc came to a really good close." Explaining the way that the show will wrap up Sansa's evolution from innocent girl to powerful leader, Turner explained, "Sansa, this whole show, the only reason she has willed herself to survive is for her family."

She continued, "The power of family and unity is so strong that it can keep people alive. That’s the biggest thing I’ve taken away from the show: Family is everything. I think Papa Stark would be very proud of us."

One person who does know what might happen to Sansa before Thrones premieres on April 14, however, is Turner's fiancé Jonas. But don't expect him to reveal anything, because the actor admitted that Jonas had to sign an NDA after he figured out the ending while visiting Turner on set. "Joe was on set most of the time so he kind of figured it out," Turner told Entertainment Tonight, "and he was like, 'Can you fill me [in]?' He signed an NDN, NDA and everything so it's all good."

Let's hope that Turner can continue to steal the show with her delightful antics long after the fantasy saga ends, no NDAs required.