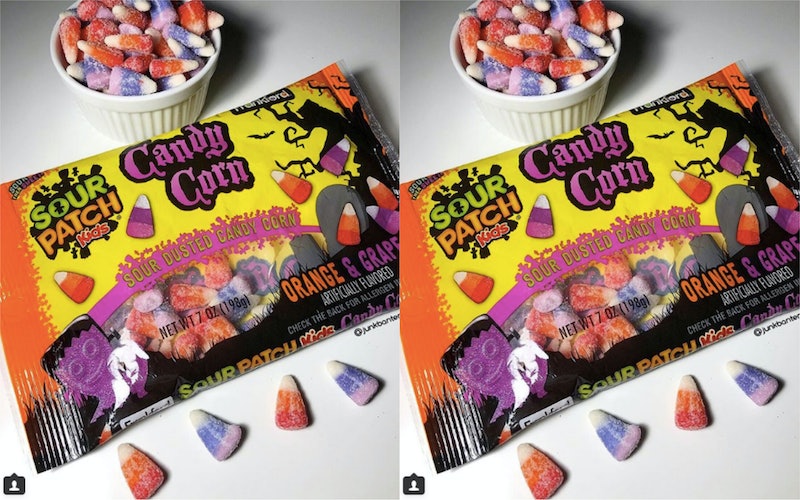 While it's only August, so this is a supremely early judgment to call, I think it is safe to say that now that Sour Patch Kids Candy Corn is about to hit shelves, we've already found the best Halloween candy in 2018. While you may not be seeing it in your local grocery store quite yet, Instagram account Junk Banter already has the scoop on what this year's version will look like — and according to their post, they're going to be every bit as delicious as last year's version. (Bustle has reached out to Sour Patch Kids for more details about this year's edition, and will update upon response.)

"Listen, I’m gonna review some Halloween candy in August and ya’ll are just gonna sit there and take it," said Junk Banter in a post on August 8. "I got these Sour Patch Kids Candy Corn at Dollar General and am pleasantly surprised at how much I like them. Going with only orange & grape was a bold, bold move, but I’m especially in love with the grape. It has a powdery sweetness and tastes like a sour, kickass version of Big League Chew. The orange is less special but good nonetheless. The best part about this candy corn is that is doesn’t taste remotely close to candy corn. Happy Halloween, ya idiots. I dictate your calendars now."

The fact that Junk Banter was able to obtain these is excellent news for Sour Patch stans, because last year's version is virtually sold out online — that is, unless you're in the mood to spend $19.99 for two bags of it on Amazon (which, y'know, no judgment — candy lover's gotta do what a candy lover's gotta do).

Plus the timing of these hitting shelves couldn't be better, because it means that there will be something to look forward to now that the rug is going to be gently pulled out from under our beloved Sour Patch Kids come August 12 — which is the day that Auntie Anne's lemonade mixers promotion will end, meaning that customers will no longer be able to take advantage of the option to top their flavored lemonades with Sour Patch Kids and Swedish Fish. Of course, nothing is stopping you from bringing your own and DIY-ing a lemonade mixer, but at least now you have the added perk of being able to put Sour Patch candy corn on it instead!

It seems that everything is coming up autumn lately — not only are we getting a first glimpse at some Halloween candies, but the pumpkin spice products are coming out in full form, too. Even the Pumpkin Spice Latte briefly awoke on Twitter this week. It seems, though, that he didn't see his shadow, because there were no announcements about when we can expect to see the PSL back on the menu — although you'll be delighted to know that Pumpkin Spice Latte products are going to be hitting grocery stores mid-August, including the brand spanking new Pumpkin Spice Cookie Straws.

The TL;DR of this fall is that it's going to be a delicious one, so get yourself to a local grocery store and start perusing your autumnal options while you can — in a few months it'll all be gone!