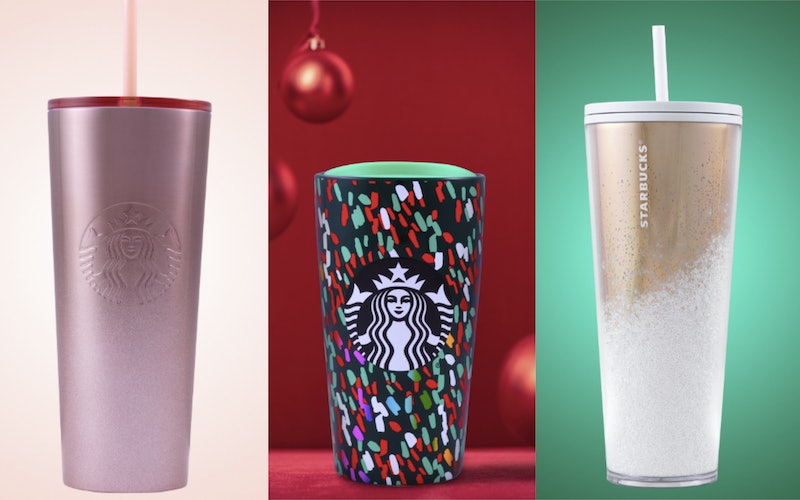 Christmas may still be three months away, but the hype for the holidays is decidedly here. On Sept. 25, Starbucks shared a sneak peek of Starbucks' holiday cups for 2019, all of which retail for $25 or less and will be available in participating Starbucks company-operated and licensed stores in the U.S. and Canada. If you're familiar with Starbucks' rotation of seasonal cups, then you'll know that there's a lot of anticipation for these cups among fans — and based on the early images of the cups for this year, this batch is well worth the wait.

This year's Starbucks holiday cup collection is more festive than ever, with pops of neon, metallic, glitter, and even a cup with a confetti pattern. The PSL may still be reigning supreme, but one look at this year's lineup of cups will have you back in Peppermint Mocha Land so fast that even Santa's reindeer can't keep up with your brain.

Starbucks hasn't announced an official release date for the cups yet, but says they're "coming soon." In the meantime, here's a sneak peek provided by Starbucks, so you can start strategizing your gift-giving for 2019 now — if there's one thing you can guarantee based on Starbucks holiday cup precedent, it's that these will sell out fast.

The iridescent 24-ounce cold cups, made with Starbucks' signature "spiked" design, feature both a new and returning color. Bling Platinum is here for a second year, according to Starbucks, and its popularity inspired a new color — neon pink. They feature a textured surface and debossed logo, and will retail for $19.95 each.

Mirror, mirror on the wall, who's the most Instagrammy cold cup of them all? This new Starbucks offering might give some of your old favorites a run for their money. According to Starbucks, this 24-ounce holiday cup will retail for $18.95 each.

No offense to the other cups, but this one is clearly superior, both because of its unapologetic whimsy and because it has the word "confetti" literally in its name. Nothing will wake you up faster on a dreary December day than taking all these colors immediately to the face. Per Starbucks, this 12-ounce tumbler will retail for $19.95.

Our collective obsession with millennial pink will likely never die, and in recent years, it has more than leaked into our holiday decor. Suitably, Starbucks is releasing a glittery homage to it in the form of this 24-ounce cold cup, which will retail for $22.95.

Starbucks heard you liked pink cold cups, so they went ahead and released a second option, too. Per Starbucks, the 24-ounce cup "features mirror foil for a beveled look," and will retail for $18.95.

This 20-ounce "high shine gold" water bottle recognizes that you probably can't caffeinate for a full 24 hours a day, and is here to keep you hydrated in the aftermath of all of those mochas you'll be chugging to get through the holiday shopping rush. Per Starbucks, it will retail for $22.95.

Again, Starbucks hasn't announced an official release date — but seeing as Halloween Starbucks cups just arrived in a big way this week, it's safe to say we probably have at least a month to go. Until then, we have the sneak peeks of them to tide us all over until the holidays are in full caffeinated swing.