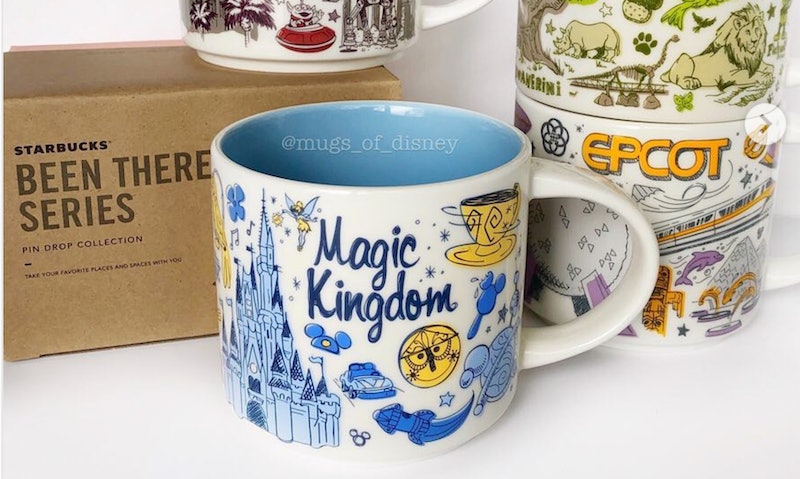 Heads up, Starbucks lovers, Disney enthusiasts, and collectors of memorabilia pertaining to both fandoms: Starbucks’ new Disney Parks “Been There” mugs have arrived, and they’re so gorgeous, you’re going to want to snap them up ASAP. There’s a catch, of course — at the moment, they’re only available directly within the U.S. Disney parks — but if you happen to be in either Anaheim or Orlando, get yourselves to your favorite Disney-based Starbucks hangout, stat. The mugs, which cost $19.99 apiece, are hands down the best way to bring your love of the Disney parks home with you.

The Starbucks “Been There” mug series, which is part of what’s known as the Pin Drop Collection, originally launched in 2018, with early images leaking beginning in January and in-store appearances occurring by March. Similarly to the previous — and extremely popular — “You Are Here” mug series, which first arrived on shelves in 2012 per this fan-made database of all the You Are Here mugs ever released, the Been There mugs are each themed after a different state, country, or city. They also all feature a variety of whimsical illustrations chosen to reflect the unique identity of that mug's particular location.

While this WikiBooks guide to collecting Starbucks city mugs claims that the "Been There" mugs are actually replacing the "You Are Here" mugs, the Wichita Eagle noted in a March 2018 story that it was unclear whether this was the case. The jury’s still out — although for what it’s worth, the Disney "You Are Here" mugs that were available in the parks starting in 2017 and at shopDisney in 2018 have now mostly vanished from both locations. Do with that what you will.

Here's what the old "You Are Here" mugs looked like:

In any event, Disney and Starbucks have clearly teamed up on a set of new mugs for the "Been There" series — and they are now finally available for purchase. According to a wide variety of Disney Parks fan sites, including AllEars.net, WDW News Today, and the Disney Food Blog, the mugs began to make appearances at Starbucks locations in both the Walt Disney World Resort in Orlando, Fla. and the Disneyland Resort in Anaheim, Calif. this week.

Like the "You Are Here" mugs before them, the "Been There" mugs each feature a specific Disney park. At Disney World, you’ll find mugs for the Magic Kingdom, Animal Kingdom, Hollywood Studios, and Epcot; meanwhile, at Disneyland, you’ll find mugs for California Adventure and the original Disneyland Park. Each is typically available at a Starbucks location in its respective park. According to WDW News Today and Disney Instagrammer @mugs_of_disney the mugs retail for $19.99 apiece.

(Reports that the Disneyland mugs are only $16.99 each appear to be erroneous, by the way. WDW News Today notes that an incorrect store display somewhere at Disneyland priced the mugs at the cost of the old "You Are Here" mugs and clarified that the "Been There" mugs are all $19.99, regardless as to which park you’re at.)

AllEars.net reports that the Magic Kingdom mug, which is sold at the Main Street Bakery, depicts Cinderella Castle, It’s A Small World, the Haunted Mansion, and other iconic attractions found at that particular park, as well as classic treats like Mickey ice cream bars and Dole Whip. The Epcot mug, meanwhile, which AllEars.net found at the Fountain View, shows the monorail, the Imagination pavilion, Spaceship Earth, and a variety of the country pavilions from the World Showcase, among other landmarks.

Here’s a high-res look at the Disney World mugs, courtesy of @mugs_of_disney; scroll through the gallery for close-up, detailed shots of each one:

The Animal Kingdom mug can be found at Creature Comforts and depicts attractions like the Tree of Life, Kali River Rapids, Dino USA, and the Festival of the Lion King. And rounding out the Disney World mugs, we have the Hollywood Studios option, which includes the Tower of Terror, Toy Story Land, the Echo Lake dinosaur, and an AT-AT among its many illustrations. It’s not yet clear at which Starbucks at Hollywood Studios this mug can be found, but I’d be willing to bet it’ll be the Trolley Car Café. Just, y’know, for whatever that’s worth.

Over at the Disneyland Resort, the Disneyland Park mug features icons like Sleeping Beauty Castle, Monstro the whale, Space Mountain, the Matterhorn, and the Hatbox Ghost. The California Adventure mug, meanwhile, includes nods to Cars Land in the form of an anthropomorphic vehicle and a bread cone full of something delicious from the Cozy Cone Motel, Pixar Pier with a sketch of the Incredicoaster and the Ferris wheel, and the Hollywood Land portion of the park with a big illustration of the Hyperion theatre. Take a look at the Disneyland mugs thanks to Instagrammer @our.happiest.adventures here (click through the gallery to see details of each side of both mugs):

Right now, the mugs appear to only available for purchase in the parks; however, as we’ve seen in the past, park exclusives do often make their way to Disney’s online store, shopDisney, sometime after their initial debuts, so it’s possible you might be able to order them from the comfort of your own computer at some point in the future. In the meantime, though, please post pics if you find them — I’m sure I’m not the only one living vicariously through others’ social media feeds right now!

More like this
You Can Stay At The 'Hocus Pocus' House On Airbnb
By Alexis Morillo
Craving The Beach? Here's Your Guide To A Solo Vacation In Turks & Caicos
By Alexis Morillo
TikTok's Butter Board Might Be The New Cheese Plate
By Emma Carey
On TikTok, Tinned Fish Date Night Is The Latest Viral Food Obsession
By Emma Carey
Get Even More From Bustle — Sign Up For The Newsletter