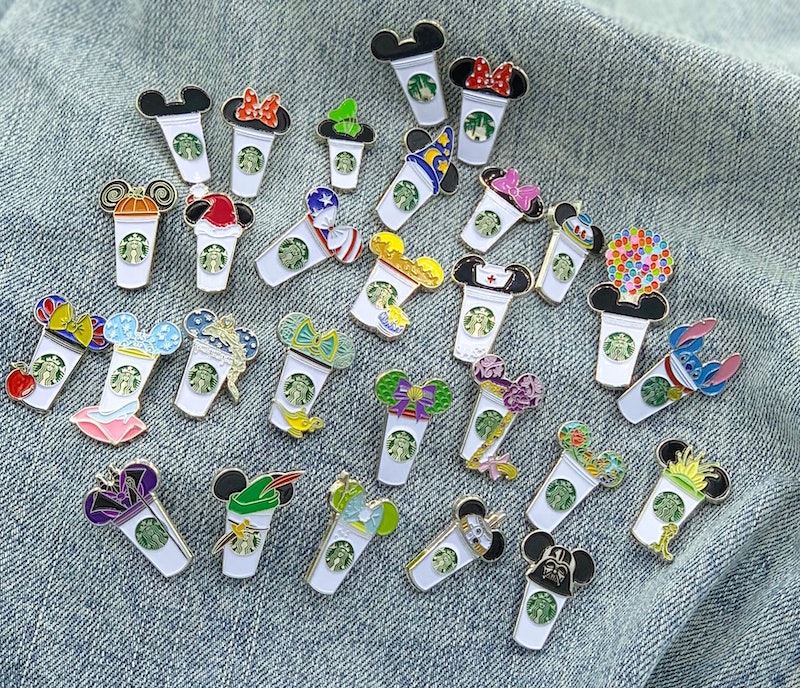 There are few things in the world I love more than Disney and coffee, so you’ll forgive me if I say that it seems almost like these Disney-inspired mouse ear Starbucks cup enamel pins from the Etsy shop Pin Lounge were made specifically with me in mind. That’s obviously not true, of course — but for all my fellow, highly-caffeinated animation and theme park enthusiasts, look! Here are some things that are perfect for us! They are adorable, and honestly, it’s taking every ounce of willpower I have not to buy out the entire stock immediately.

Pin Lounge is the creation of a married couple based in New York. The Etsy shop originally opened in 2017, and in the nearly two years since, it has continued to offer a growing assortment of enamel pins inspired by all sorts of interests and obsessions. Love penguins? Pin Lounge has you covered. Still obsessed with chocolate milk, even as a fully-grown adult? Here you go. Cursing your parents for making you get rid of your Treasure Troll collection all those years ago? This one’s for you.

Disney-oriented fashion site Disney Fashionista gets the credit for highlighting Pin Lounge’s Disney-inspired creations this go-round, although I’d also like to thank the Starbucks Leaf Rakers Society group on Facebook for putting Disney Fashionista’s piece on the pins directly in front of my eyeballs last week. (Yes, I realize that it is long, long past Pumpkin Spice Season. No, I do not plan on relinquishing my Leaf Rakers Society membership anytime soon.) I’ll confess that, as beautiful as the various mouse ear hats and headbands that so frequently go viral these days are, I’ve never felt compelled to buy any myself; practically speaking, I’ll never wear them outside a Disney park, so they’ve just never been a particularly compelling souvenir to me. (More power to you if they’re your jam, though.) Enamel pins, though? Those, I’ll wear — often and everywhere. The fact that the mouse ears are perched atop little white and green coffee cups is, of course, an added bonus, because… well, just look at them. They’re so cute I can hardly stand it.

There are tons of options, but they can all generally be classified under a couple of loose headings.

If your favorite Disney characters are the classic ones, good news: You have lots of options. This four-pack includes Minnie, Mickey, and Daisy pins, along with a Santa hat-adorned holiday edition of the Mickey pin; however, Donald Duck and Goofy can also be found individually elsewhere in the Etsy shop. Personally, I’m partial to the Donald pin — the ears are topped with a little sailor hat just like the easily-excitable duck’s own, which kind of makes the cup look like it’s wearing a hat that’s wearing another hat.

The pins included in the four-pack can also all be purchased individually for $10 apiece. Just, y’know, FYI.

Ariel of The Little Mermaid, Cinderella, Belle of Beauty and the Beast, Snow White, Elsa of Frozen, and Jasmine of Aladdin are all represented here. The Ariel pin features green mermaid scale ears with a purple, shell-adorned bow; Cinderella’s pin is blue and starry, topped with a tiara, and finished off with a glass slipper; Belle’s ears mimic the stained glass windows that serve as a storytelling device in Beauty and the Beast; the Snow White pin takes on the blue, yellow, and red color scheme of Snow’s dress, with a poisoned apple adding the final touch; Elsa’s blue, snowy ears are topped off with a tiara and her signature blonde braid; and the Jasmine pin turns her turquoise and gold outfit into a set of jeweled ears accompanied by a magic lamp.

All of the pins are available individually for $10 each — but you can also get the entire set for $50, which knocks the price of each pin down to $8.30, in case value-saving sets are your thing. Worth noting, though, is that there are also a few other Disney Princess Pins that aren’t part of this set: Tiana from The Princess and the Frog and Rapunzel from Tangled, for example, can both be found in the larger Pin Lounge shop, too.

Is the "Imperial March" your theme song? This cup’s mouse ears are tacked onto Darth Vader’s mask. Wishing you could run away to Neverland? Tinkerbell’s pin will sprinkle you with a little fairy dust, while Peter Pan’s supplies the iconic green hat and dagger. Stitch is here, too, as is Winnie the Pooh. And if you navigate away from Etsy and to Pin Lounge’s standalone website, there’s even a glorious Maleficent pin all done up in purple and black, complete with horns. Like the other pins, these ones are all $10 a pop. Heck yes.

Lastly, there’s a selection of mouse ear Starbucks hat pins that remind me the most of the kinds of ear hats and headbands you can get at all the Disney parks: The ones that aren’t necessarily designed to mimic a specific character, but which take the classic mouse ear silhouette and jazz it up a bit. This red cup holiday set takes its cues from Starbucks’ infamous holiday cup; it’s $18 for the pair or $10 for each pin individually.

But in case you’re already over the holiday season, there are tons of other designs available, too: A Birthday Mickey pin featuring a Starbucks cup topped with pink ears and a cupcake; a cup topped with a pumpkin-themed ear hat for Halloween; a red, white, and blue Minnie ear pin for the 4th of July; and so on and so forth. Each one is just as cute as can be — and again, they’re all $10 each.

I want them all. Good thing my birthday is coming up in a few months.

You can find the full selection at Pin Lounge’s website and Etsy shop — and hey, if Disney or Starbucks doesn’t do it for you, there are also plenty of other themes to choose from, particularly for those prone to losing themselves in long spells of nostalgia. How about this Olmec pin? Or this DIC one? Or a miniature, wearable Ninja Turtles lunchbox? There’s a heck of a lot more where those came from, too. Check ‘em out here and here.