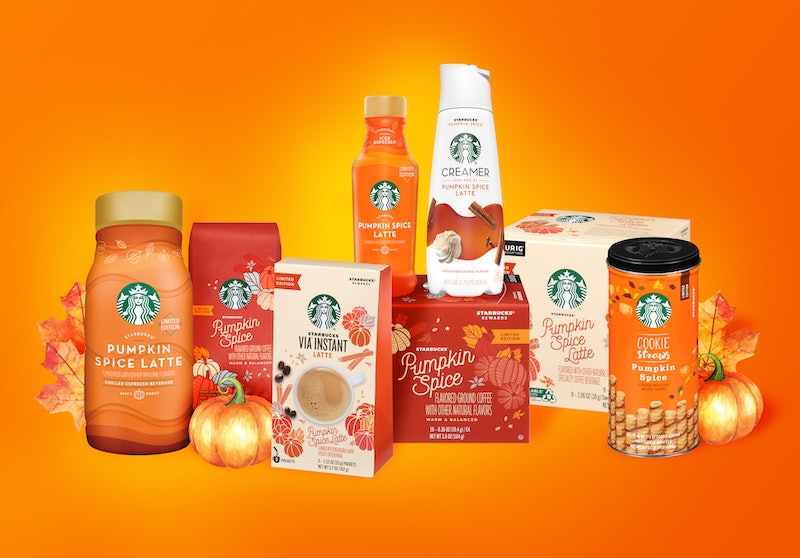 We may not know when the perennial fall favorite, the Pumpkin Spice Latte, is returning to Starbucks for 2019 yet — but at least we’ve got something to tide us over while we wait: Starbucks just dropped tons of Pumpkin Spice items you can enjoy in the comfort of your own home. Available at a wide variety of grocery stores, these picks, which cover both new options and returning favorites, have already hit shelves — and while it’s true that at-home mix-ins may not perfectly recreate the experience of a fresh, barista-made latte, I’ll take it. Fall is the best season. Pumpkin spice is the best flavor. This is a hill on which I will gladly die.

It's worth noting that Starbucks didn’t straight-up invent the idea of a pumpkin pie-flavored latte; a handful of other coffee shops in a wide variety of locations dreamed up similar drinks independently of one another and began offering them some years before Starbucks’ version hit the scene. However, the Seattle-based coffee giant is generally credited with bringing the seasonal beverage into the mainstream. Developed and tested in 2003 and rolled out nationwide in 2004, Starbucks’ Pumpkin Spice Latte has gone on to become a cultural staple of the fall season; emerging from the shadowy depths of its cinnamon-and-nutmeg-scented cave at the end of August or beginning of September each year, its arrival heralds the beginning of autumn for many coffee lovers.

Now in its 16th full season, the Starbucks PSL has grown far beyond a single beverage and spawned a whole line of products — many of which are available in the grocery store. You necessarily don’t have to go to Starbucks to scratch your PSL itch anymore; you can mimic the drink yourself right at home. And this year, the company has tons of options for you to choose from, according to a press release.

The big news, of course, is the Pumpkin Spice Creamer. At the end of July, Starbucks announced that a number of liquid creamers from the brand would be coming to grocery stores in August; found in the refrigerated section, the creamer line included three flavors inspired by some of Starbucks’ most popular drinks: Caramel (for the Caramel Macchiato), White Chocolate (for the White Chocolate Mocha), and Cinnamon Dulce (for the Cinnamon Dolce Latte). Now, a Pumpkin Spice flavor has also joined the line for a brief time. Inspired by the PSL, the creamer was “thoughtfully crafted with the delicious flavors of pumpkin, cinnamon, and nutmeg to pair with your coffee for a perfect taste of fall,” as a press release puts it. It will be available in 28-ounce bottles for about $4.99 a pop.

If you prefer your PSL iced, the drink has also been bottled in two different ways: The Pumpkin Spice Latte Ready-To-Drink version runs $2.93 for a 14-ounce bottle, while the Iced Espresso Classics Pumpkin Spice Latte — which is basically just a huge bottle of the Ready-To-Drink PSL — is about $4.99 for a 40-ounce, multi-serve bottle. You’ll find the 40-ouncers in the refrigerated section.

And lastly, the glory that is the Pumpkin Spice Cookie Straw is returning for 2019. Originally introduced in 2018, the seasonal take on the already-popular rolled wafer cookies proved to be a major hit—and it’s no wonder: They take everything that’s already great about cookie straws and fill them with white chocolate and pumpkin spice. Heck, and yes. This year, they’ll set you back about $3.99 for a tin of 20 cookie straws.

Starbucks isn’t the only company to have launched a bottled pumpkin spice creamer lately; Coffee-mate also just debuted their offerings for the 2019 fall season, which include a pumpkin spice flavor available in both the original Coffee-mate formula and the Natural Bliss line. No doubt a number of other options from countless other brands will be arriving shortly, as well. After all, The Spicening 2019 has only just begun. When it comes to pumpkin spice, there’s almost always more where that came from. Stay tuned throughout the season — and in the meantime, if anyone needs me, I’ll be at the bottom of my coffee cup.

More like this
Pret & Costa’s Coffee Is The Strongest On The High Street, According To Which?
By Sam Ramsden
Learning To Love, Not Judge, The Lunchbox Wives Of TikTok
By Esther Zuckerman
Ashamed Of Your Screen Time Stats? Here's How To Change That
By Alexis Morillo
Dunkin’s Valentine’s Day Lineup Includes A Drink That Tastes Like Dessert
By Alexis Morillo
Get Even More From Bustle — Sign Up For The Newsletter
From hair trends to relationship advice, our daily newsletter has everything you need to sound like a person who’s on TikTok, even if you aren’t.