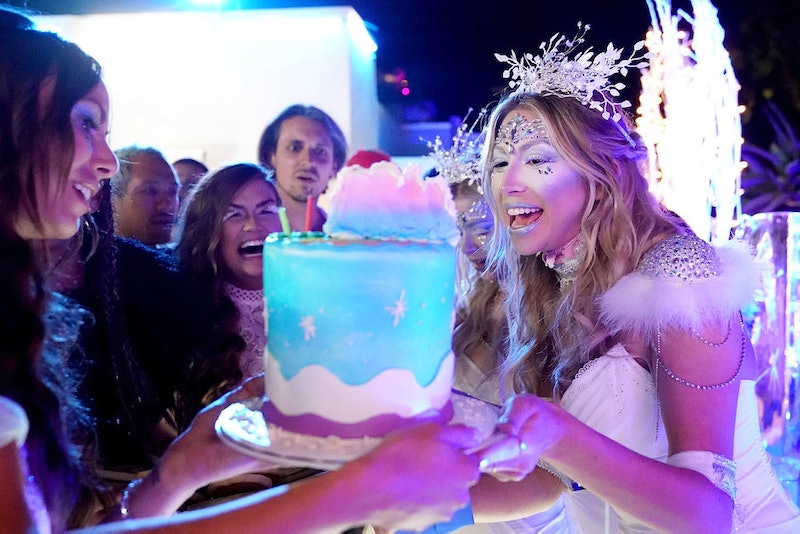 Vanderpump Rules star Stassi Schroeder has, to put it mildly, dated a few duds during her tenure on the show. This isn't any hate to her, because honestly, who hasn’t? But this season, she's in a good, stable relationship with Beau Clark, a commercial casting and advertising associate castmates Kristen Doute and Katie Maloney-Schwartz set her up with. Given that Stassi's love life has been so tumultuous, she should be happy that she's found "the one," and she is! But Stassi's relationship with Beau on Vanderpump Rules also shows how hard it is to shake off the scars and baggage of past toxic relationships.

Stassi's first man on Vanderpump Rules? Jax Taylor. If you watch the show, you know how terrible he was to her, but if not, here's the gist of it: Jax cheated on Stassi repeatedly and lied to her constantly about where he was, what he was doing, and pretty much everything else. He slept with her best friend, Kristen (who's also at fault, but this is about Jax), then lied about that, too. He also allegedly got a woman pregnant on a trip to Las Vegas. After Jax and Stassi broke up, she dated Frank, another bartender at SUR, and he was no prize either. During her podcast Straight Up With Stassi, she claimed he was the one who tried to sell a private sex tape she'd shared while they were together.

After that whole saga, Stassi was in an on-and-off relationship with Patrick Meagher. He was condescending and initially refused to film for Vanderpump Rules, forcing Stassi to choose between her relationship and her job (he did eventually appear on the show, but that didn't do him any favors). Thankfully, Patrick and Stassi split in 2017, and now she's with Beau, who she is obviously very happy with. But the scars of Stassi's old relationships are sneaking up on her.

After her birthday party in the Jan. 7 episode, Stassi had a few too many drinks and opted to go to bed. Beau, though, was still at the party having fun with everyone else. Stassi's reaction was probably heightened due to the alcohol, but she texted and called him numerous times without an answer. On the show, Stassi says that she wants to have Beau with her in bed at the end of the night so she "knows everything is OK." She also says that "being left is a big deal."

Stassi has had to do the work in the bulk of her relationships, so it makes sense that she is hyper-vigilant about her boyfriend's actions. That said, with Beau, she doesn’t have to be. But Stassi is used to being stepped on and cast aside, and it's hard for her to let go of that feeling, even in a healthy relationship.

In previews for the next episode of Vanderpump Rules, Stassi and Beau seem to be fighting, or at the very least, having a discussion about her behavior. Stassi's feelings are certainly valid, but it's also unfair for her to project past fears onto Beau when he's given her no reason to do so; it's hard to be with a partner that always thinks the worst of you. Hopefully, the two can work things out and put Stassi's past behind them.