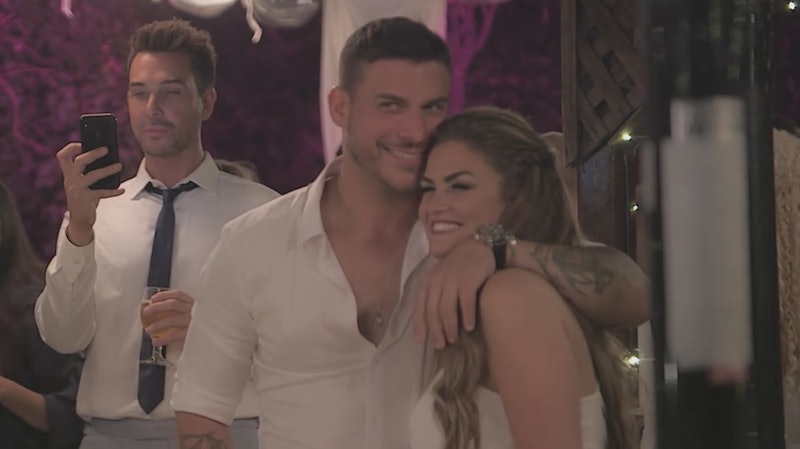 Make sure you have plenty of tissues on hand, because things are getting extremely emotional for your favorite SURvers. The Vanderpump Rules Season 7 trailer dropped on Wednesday, and it looks like everyone is going to reach their breaking point in the upcoming season, with relationships, friendships and even positions at SUR seemingly more tentative than ever.

Kicking off at Jax Taylor and Brittany Cartwright's engagement party, the trailer sees Lisa Vanderpump toasting the happy couple on their impending nuptials. She raises her glass to the "night that many of us thought would never happen" before noting that Taylor "had a very emotional year, as a few other people here have." Though the trailer gives a look at Cartwright's excited reaction at becoming engaged, things quickly take a more serious turn, as everyone else's relationships seem to be falling apart.

James Kennedy is seen screaming that "nobody can replace" him and being comforted by girlfriend Raquel Leviss — before the two of them are seen fighting in bed. Meanwhile, both the Toms (Schwartz and Sandoval) are in a difficult place with their respective partners, Katie Maloney-Schwartz and Ariana Madix, while Stassi Schroeder and her boyfriend (and new cast member) Beau Clark, have an emotional confrontation. The drama, it seems, has only just begun.

And while fans are no strangers to seeing the Schwartz's fight with one another, the Season 7 trailer seems to imply an even bigger rift than ever before, with the husband and wife screaming at each other over Schwartz's partying. After Katie claims "I let you go out all the time," her husband retorts, "You don't let me do anything! I do what I want!"

The trailer quickly follows that up with a shot of Lisa advising someone that their "relationship is in trouble," which might mean that Mr. and Mrs. Bubba may have officially reached their breaking point. They're certainly no strangers to breakup rumors — and appear to be going strong on social media — but it's possible that the very stressful opening of TomTom could be a major source of marital drama for these two.

Of course, there's plenty more Sexy Unique Drama ahead for the SURvers, over the course of what James once described as the "spiciest season yet."

While the trailer teased that many of the cast's friendships are going strong — including the one between newfound friends Katie and LaLa Kent — it looks like SUR's resident DJ will cause some new drama that will turn everyone else against him. "James stirs up trouble when an ill-conceived rap lands him in hot water with the group," teased Bravo in a press release sent to Bustle about the new season. "Kristen retaliates by unleashing an explosive rumor about James setting off an irrevocable chain of events that will affect the entire SUR family."

Sure, DJ James Kennedy has started more than his fair share of fights in the past, but based on one moment in the trailer, where he is seen sobbing and begging Lisa for help, it looks like he really may have gone too far this time.

"Lisa, please," James sobs, while the Vanderpump matriarch shakes her head sadly. "I can't risk it," she responds, which leads the DJ to cry even harder, and beg, "Don't take it from me." Considering the last time Vanderpump Rules fans saw James this upset he was dealing with a serious drinking problem, whatever goes down with him this season is definitely a major deal.

"This will be the best season yet hands down... that’s a fact!!" Jax wrote on Twitter back in September, promising that "emotions are high as hell this season." While that may have seemed like an impossible promise to live up to at the time, based on this first trailer, it looks like Season 7 of Vanderpump Rules will definitely be the most intense one yet.