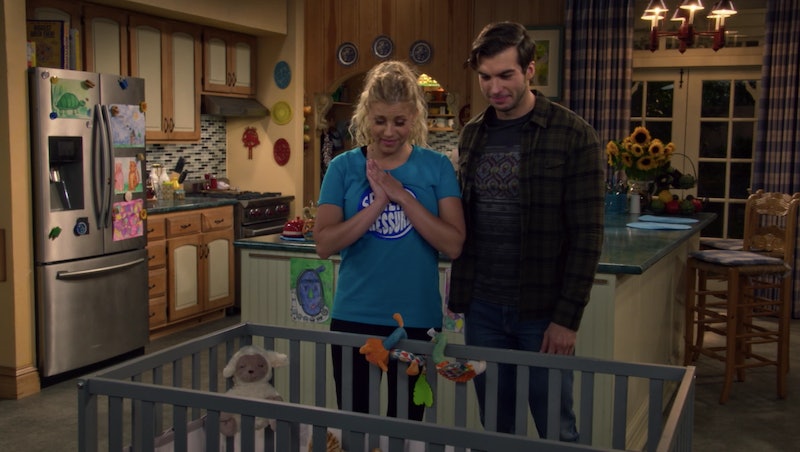 Spoilers follow for Fuller House Season 4. As cheesy as it may be sometimes, you'd have to be particularly cynical and cold to not catch a feeling or two while watching Fuller House. The wholesome spinoff of the '90s sitcom has a special place in fans' hearts, and so do the characters. Which is why watching Stephanie and Jimmy's engagement in the Season 4 finale was so sweet. It's like watching a childhood BFF get all grown up.

Stephanie has come a long way in the Fuller House spinoff. Originally, she returned to San Francisco after spending years on the road as a DJ. (Yup, just like her sister.) She was irresponsible, broke, and definitely not about to help out with chores around the house. How rude, right? While she still doesn't seem to know that the family has a washing machine in the house in Season 4, Jodie Sweetin's character in Fuller House has evolved so much.

In fact, even the fact that she lets Kimmy Gibbler be the surrogate for her baby is a big step. Over the course of Season 4, Steph prepares for the baby, bonds with Kimmy and solidifies their friendship, and also seems to be ready to co-parent the baby with Jimmy, without going for the traditional marriage route.

And that would've been just fine. After all, Full House and its spinoff are all about untraditional parenting and the fact that it takes a village — or at least a very full two story home in San Francisco — to raise kids.

But you can tell that Stephanie does like Jimmy and wouldn't mind settling down with him if he wanted to commit. For most of the time they're together, that doesn't seem to be the case. But after a tear-jerking labor scene, in which Kimmy gives birth to the tune of Joni Mitchell's "Circle Game," Jimmy takes Steph aside. As she holds her baby girl (still unnamed), he takes a knee, declares his love for her, and asks her to marry him.

"Uh, you know I have a kid, right," Steph asks in reply. Once the laugh track dies down, though, she accepts the proposal, and they join the rest of the group to celebrate the new baby, their even more extended family, and good things to come. It leaves a lot open for another season, which could go so many ways, whether it picks up right after with Steph learning how to be a mom or time jumps to a point where she would be parenting a toddler. I vote for the time jump, just in the name of having them cast another adorable kid to crack wise in the kitchen and learn valuable life lessons from their dozens of parental figures in their life.

Jimmy and Steph are actually a cute pair, and giving them a wedding to plan and a baby to raise together is definitely sitcom gold. Fans will just have to sit tight for a Fuller House Season 5 premiere date to be announced — it can't come soon enough now.