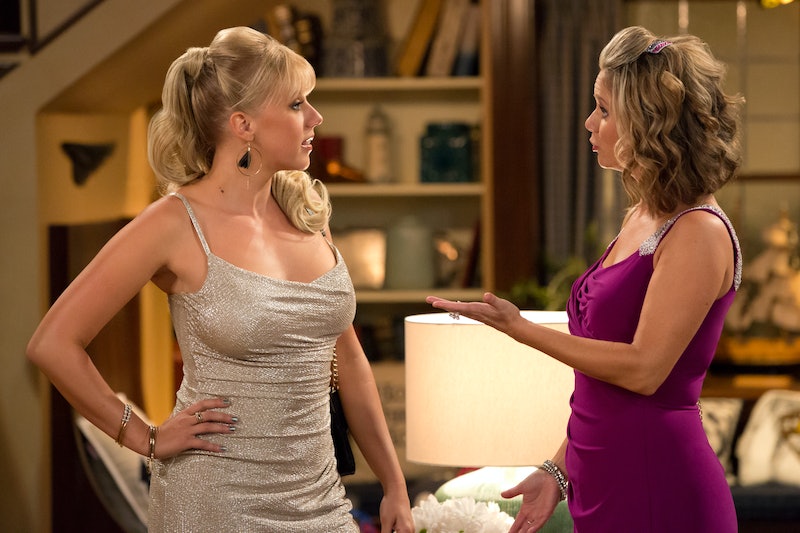 If I think back to the family sitcoms of my childhood, images of Queen Topanga Lawrence come to mind. I remember Tia and Tamera from Sister, Sister and their impeccable hats. I recall Sabrina Spellman and her black cat. But there was also Full House — which, as all nostalgic Millennials probably know, has recently been revived as Fuller House on Netflix. When I ask myself what all these leading ladies of the 1990s had in common, there was definitely a certain modesty to them. A lot of us watched Topanga, Tia, Tamera, Sabrina, and D.J. and Stephanie Tanner navigate from being awkward kids to teens making out with backwards-baseball-hat-sporting boys on their front porches, but even as they aged and entered the realms of "being a grownup," the modesty that seemed almost integral to their characters remained.

I understand that these shows target kids and young teens. They aren't supposed to be comparable to the sexy cinematic experiences of One Tree Hill or Gossip Girl. In a culture that is arguably afraid of children being introduced to concepts of sexuality too young (if at all), it makes sense to me that the protagonists of television aimed at a youthful demographic, particularly the female protagonists, would be devoid of any kind of sexual agency or radicalness.

But there's a problem with young girls and women only seeing cookie-cutter, suburban female characters who are seemingly disinterested in sex, experimentation, drinking, or their own bodies on TV. There's an implication that the type of woman who is disinterested in all of those things is the "right" type of woman — or rather, the "only" way to be a woman. This is precisely why I think Stephanie Tanner's new style on Fuller House is so important.

In the pilot, Stephanie is introduced as the "liberal aunt" of sorts. She is a disc jockey, she has traveled the world, she has drunkenly ridden an elephant with Macy Gray, she dates, she can enjoy parties, and we later learn that she's into weed (or at least weed brownies) in a very subtle-enough-for-kids-not-to-catch-it kind of way.

A lot of her outfits are also tight on her body, and show off her boobies without over-sexualizing her or feeling like their point is to cater to the male gaze. Her makeup is usually smoky, with a blue eye shadow sometimes thrown into the mix and some emo-friendly top and bottom pencil eyeliner. She's unlike any female protagonist I ever came across when I was the age of Fuller House's target demo. There's a tackiness to her aesthetic, and it's a tackiness that many women IRL have claimed as a source of empowerment.

Adult Stephanie isn't concerned about "wearing too much eyeliner" or "looking like a teenager," what with her heavy eye makeup and night-out dresses that look exactly like the sort of thing you probably tried to wear to homecoming in 10th grade until your parent saw you and threw a fit. Actor Jodie Sweetin is 34, and I assume Stephanie is in her 30s as well, given the show's timeline and seemingly linear narrative. But she has no regard for "age-appropriate" ensembles or social guidelines that dictate the levels of "classiness" women should exude. She is fearlessly herself, and herself just so happens to be messy, glamorously kitsch, and exactly the sort of human you could imagine hanging out with the Queen Of Trash if Divine was still with us.

The word "tacky" is a complicated one, rooted in classism and sexism and probably any other "ism" you can think of that intersects with the experience of being a woman. Whenever I hear it, it's pegged to women who, like Stephanie, sport whatever is considered "too much makeup" or "not enough clothes," or who "party too hard." Even though Stephanie does distance herself from the party scene throughout the series, her style doesn't change much. Plus, she still delves into cannabis. It's her sense of autonomy and security in herself and her interests which make her (and her clothes, which serve as a vehicle for expressing her personality) such a valuable example for young women.

When we see Stephanie dancing with a guy she's just met at a club in episode three, her entrance onto the floor is so independent. It's like she's dancing with herself, and he's just there for the ride. But then she gets into it more, with facial expressions and bodily gestures that aren't just sexy, but also suggest actual sexuality. We know this is a woman who's dated and hooked up with people and lived a life on her own terms. And yet you never get the feeling like the dude's in control. Even her dress — something a lot of folks might be quick to disregard as "something she's wearing to attract men" didn't feel as such to me. Instead, it's a way she exercises control over her body. She's pampering herself with a sparkly dress fit for a badass queen. No ingrained cultural slut shaming is going to get in the way of that.

Moreover, Stephanie also confesses to DJ early on that she cannot have children for undisclosed medical reasons. I know a couple of conservative viewers who took that to mean that "It's OK for her to be trashy and slutty, because she can't get pregnant anyway." But personally, I took that to be one way of highlighting the fact that women don't have to have children to be valid and worthy and lead fulfilling lives. The show shared this particular narrative in a way that was accessible to younger viewers, and which hopefully presents young female viewers with further evidence that there is no "one" way of living life as a woman.

I love how messy and tacky and non-age-appropriate Stephanie is. I love that she debunks any absurd myths about what "women over 30" are supposed to look like. I love that she's interested in sex and pot brownies and heavy eye makeup. And I love that young women watching her who have ever been slut shamed, who have been made to feel like they're doing something wrong for not being put-together enough, now have her.

I understand that, physically, Steph is a beautiful blonde who cannot offer much in terms of a diverse entertainment experience regarding issues of race, size, or ableism. (The sitcom's overall whiteness is actually joked about by Ramona on the show itself early on, and it's obviously not ideal.) But in a world that still breeds a lot of sexism, it's still incredibly important to see diversity in terms of female "acceptability" (i.e. how a woman is expected to behave in order to be socially accepted) — particularly for young women.

More like this
The 'Hocus Pocus' Sequel Finally Has A Release Date & It Makes Total Sense
By Shannon Barbour and Radhika Menon
Iris Law's Skunk Mullet Is Not For The Faint-Hearted
By Tomi Otekunrin
I Tried Marilyn Monroe's Makeup Tricks, & They're Pretty Genius
By Olivia Rose Ferreiro
10 Nail Trends That Perfectly Capture The Early 2000s
By Paris Giles
Get Even More From Bustle — Sign Up For The Newsletter