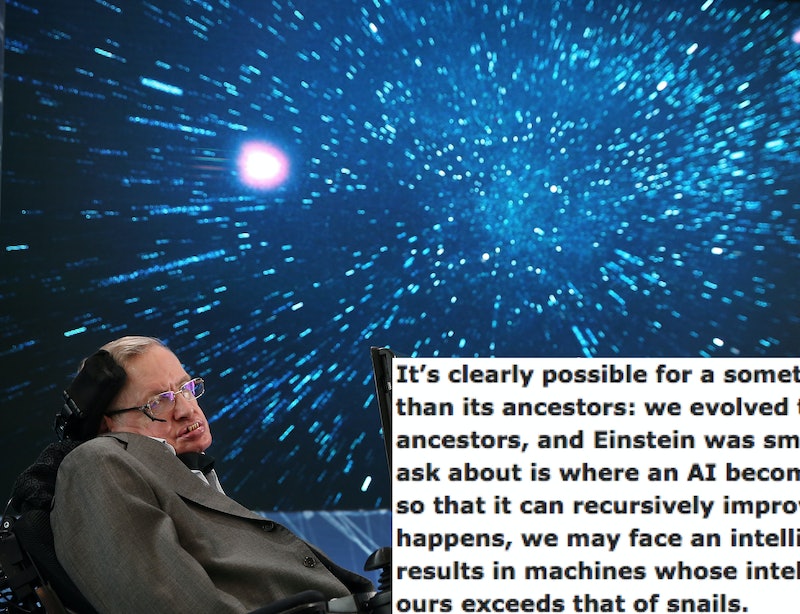 On March 14, 2018, physicist Stephen Hawking died at the age of 76 — and in the wake of his death, Professor Hawking’s final Reddit AMA has gone viral all over again, with one specific comment even making its way all the way back to Reddit’s front page. Originally carried out in 2015, the AMA — short for “Ask Me Anything” — focused largely on what the development of artificial intelligence means for our future; however, it also contained multitudes (as one would expect from one of the finest minds ever to emerge from human history). It’s worth revisiting again now as we honor both the work and the memory of Professor Hawking — and worth keeping in mind as we move forward into the future. There are a lot of lessons here, and nearly all of them function on a seemingly endless amount of levels.

Of the first 10 links on my Reddit own front page, six of them — fully three-fifths — are about Hawking. The very top one, at nearly 160,000 upvotes at the time of this writing, is the memorial thread posted to r/science; just below that is the Stephen Hawking megathread posted to r/askscience; and then, a little further down, there’s a post from r/bestof posted by Redditor nerdalatortitled, “Stephen Hawking's final Reddit comment. Which was guilded [sic]. All the win. RIP good sir.” The comment was gilded six times — that is, in response to it, Redditors gifted Professor Hawking with six months’ worth of Reddit Gold, which grants users access to premium features — a mark of extremely high regard, indeed.

Although AMAs with public figures are frequently run with assistance by Reddit’s staff, Hawking’s was executed a little differently than usual due to his particular situation. (Hawking was diagnosed with a slow-progressing form of the motor neurone disease amyotrophic lateral sclerosis, or ALS, when he was 21. He was also a busy, busy man.) “The AMA will be in two parts,” the mods of r/science noted at the time the AMA was announced in July of 2015. “Today we [will] gather questions. Please post your questions and vote on your favorite questions. From these questions Professor Hawking will select which ones he feels he can give answers to.”

The note continued, “Once the answers have been written, we, the mods, will cut and paste the answers into this AMA and post a link to the AMA in r/science so that people can re-visit the AMA and read his answers inthe proper context.” It took a few months for the whole thing to be completed, but the finished AMA was finally posted in October of 2015, where it remains today.

The comment from the AMA which has remade its way to the front page of Reddit — Hawking’s very last answer — is one about technological unemployment (basically the idea that the robots are coming for our jobs, although obviously it’s a lot more complicated than just that). “In particular, do you foresee a world where people work less because so much work is automated?,” the Redditor who asked the question had written. “Do you think people will always either find work or manufacture more work to be done?”

Hawking’s answer was… not comforting, but necessary to hear: “If machines produce everything we need, the outcome will depend on how things are distributed,” he wrote. “Everyone can enjoy a life of luxurious leisure if the machine-produced wealth is shared, or most people can end up miserably poor if the machine-owners successfully lobby against wealth redistribution.” The trouble is, he noted, “So far, the trend seems to be toward the second option,with technology driving ever-increasing inequality.”

I won’t lie: This trend of those who already have the economic upper-hand successfully lobbying against wealth distribution seems truer now than ever. (Tax bill, I’m looking at you. And all the people who pushed you through.) This is both discouraging and frightening.

But at the same time, I’m also reminded of Hawking’s optimism — one of his defining qualities (besides, obviously, his genius) which always stands out to me. And I have to hope that if we can identify this trend — if we can see it happening — then we can also stop it before it’s too late. As he himself once put it:

“The message of this lecture is that black holes ain't as black as they are painted. They are not the eternal prisons they were once thought. Things can get out of a black hole, both to the outside, and possibly to another universe. So if you feel you are in a black hole, don't give up. There's a way out.”

Here are five more responses from Professor Hawking’s Reddit AMA that are worth a moment of your time — today, and always.