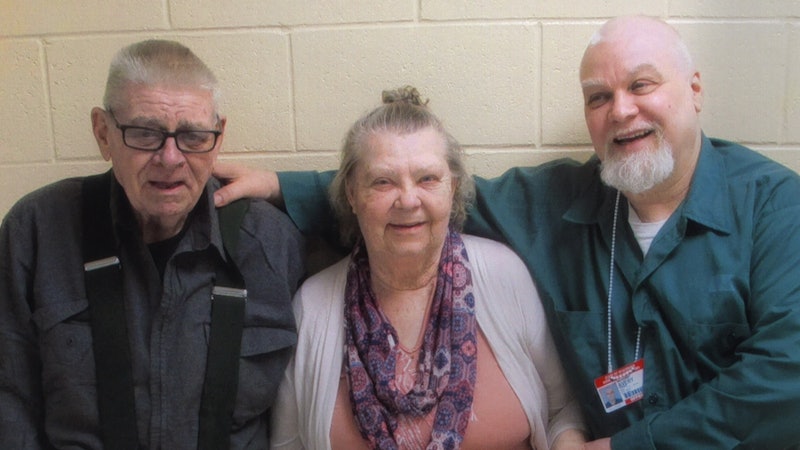 Spoilers ahead for Making A Murderer Part 2. Steven Avery's parents, Allan and Dolores, have been present throughout Making A Murderer's now-20 episodes, but especially so in the show's newly released Part 2. Allan in particular has kept more toward the background — at one point, he asks Dolores to get the cameras away from him — but in Episode 8 of Making a Murderer Part 2, Steven Avery's dad finally opens up in a rare emotional moment.

On Avery's 55th birthday, Allan and Dolores drive three hours from their home to the prison where Avery is incarcerated for the 2005 murder of Teresa Halbach. (Avery has firmly maintained his innocence in the crime.) Upon their arrival, Allan realizes he has forgotten his wallet and his driver's license. Because he doesn't have proper identification, he isn't able to gain clearance into the prison, which comes as a heavy blow after the long trip he's just made to see his son. Dolores ends up going inside without him while he waits in the car. "At least Dolores will get in there to see Steve," he says.

Then, after they're back home, he tells the camera that the possibility of he and Dolores dying before Avery potentially gets out of jail has been weighing on him. "My greatest worry is that me and mama don't pass away before Stevie gets out," he says with tears in his eyes "'Cause it can happen. When we get to see Steven, he gives us all a big hug."

It's a conflicting moment. Halbach's murder has obviously taken a toll on her own family, but it's hard not to feel for Allan, who wants the chance to spend time with his son. In Part 1, he voiced his dissatisfaction with how Avery's case was handled, but these comments are one of the few times he's been so candid with the filmmakers behind Making A Murderer.

It also comes after Avery's defense lawyer, Kathleen Zellner, has given Allan and Dolores hope that Avery could one day be released. Part 2 is largely centered around Zellner's attempts to appeal Avery's conviction. She consults numerous experts and tries to refute previous evidence, alleging that Avery was framed for Halbach's death by local authorities. (The Manitowoc County sheriff's department has repeatedly denied these claims, and when reached for comment, Sheriff Robert Hermann told Bustle that he is "not discussing or making any further comments related to this case.")

As outlined in the docuseries, Avery previously served 18 years in prison for the rape and assault of Penny Beernsten, but was exonerated by new DNA evidence and released in 2003. Combined with his current sentence, which began in 2007, Avery's family has been dealing with prison visits and missed holidays for most of Avery's adult life.

Throughout Making A Murderer Part 2, Zellner assures Avery's family that he will one day walk free, but it's clear Allan is worried that if that happens, it won't be in his lifetime.