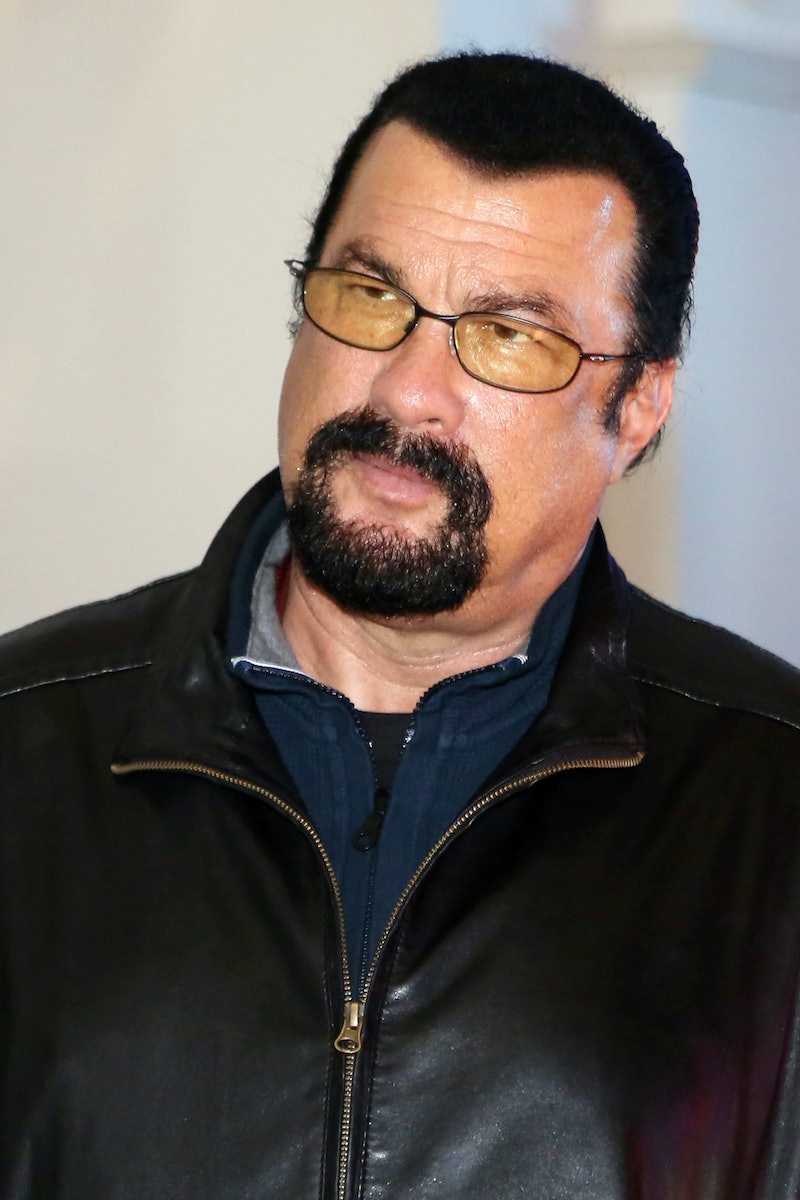 More sexual misconduct claims about '90s action star Steven Seagal have surfaced. On Thursday, Jan. 11, The Wrap published an article detailing rape allegations against Seagal from a woman named Regina Simons, while former model Faviola Dadis adds her voice to the list of more than a dozen women accusing the actor of alleged sexual misconduct. According to The Wrap, both women have filed reports against Seagal with the LAPD. (Bustle reached out to Seagal's lawyer, as well as the LAPD, for comment, but did not receive an immediate response.)

UPDATE: Seagal's lawyer denied the allegations from Simons and Dadis, which they voiced in a press conference on March 19, in a statement to Bustle:

Mr. Seagal denies all accusations and continues to stand his ground that he has not engaged in any such misconduct. The allegations that have been made against Mr. Seagal are false and have no substantive material support. The accounts of both women are completely fictitious and totally made up. The allegations are a disservice to women who are victimized because of real predators in the film industry.

EALIER: In 1993, Simons was 18 when she and her brother reportedly went to an open casting call for Seagal's film On Deadly Ground. The movie was casting Native-American extras, and Simons is part Navajo and part Sioux. According to Simons's account, Seagal invited Simons and her brother to join him on set. While Seagal and her brother talked, Simons said she had a headache and Seagal allegedly offered to give her a massage. Simons' brother, Ben, corroborated her story to TheWrap.

A few weeks after Simons' scene in the film was shot, she alleges that she received a call from Seagal inviting her to the movie's wrap party at the actor's home. When Simons arrived, she was the only person there. Simons claims that Seagal then took her into a room and allegedly raped her. According to Simons, the alleged encounter was her first sexual experience. Simons told TheWrap,

"The only way I'm able to describe it is I literally felt like I left my body. I think because of the situation I was completely caught off guard. Tears were coming down my face and I know that it hurt. He was three times my size."

Simons claims that after the encounter was over, she gathered her clothes, and Seagal asked her if she needed any money. She later considered coming forward and addressed the alleged incident with her church's bishop, but ultimately, she claims she was too ashamed to pursue charges at the time. Her bishop also confirmed to TheWrap that Simons did tell him about the alleged incident.

According to Simons, Seagal tried to call her several times after the alleged rape, but Simons asked her roommate at the time to not take his calls. Simons is now a 43-year-old mother of two. She lives in the Los Angeles area where she is a case advocate for Native-American families. In August, Simons was reportedly diagnosed with Post-Traumatic Stress Disorder. With Simons' permission, her psychologist told TheWrap that they believe the alleged encounter with Seagal is the source of Simons' PTSD. The psychologist, who remained anonymous, told the site:

"For a first sexual encounter to be violent, it skews your views of the world, relationship and sex. It modified the trajectory of her life."

Dadis, a former model, has also come forward with accusations against Seagal. In an Instagram post, Dadis shared her own account after reading about actor Portia de Rossi's claim that Seagal exposed himself to her during a private audition. Dadis alleges she had a similar experience with Seagal while auditioning for a role in a film about Genghis Khan. She claims that Seagal invited her to a private audition where he allegedly groped her and allegedly grabbed her crotch.

"I never reported this to anyone out of fear that someone like Steven, with such a huge amount of power, influence, and money would easily win a legal battle; and furthermore that I would damage my career. However, as others are now speaking out against Steven, I would like to do the same."

In addition to Dadis, Simons, and de Rossi, Seagal is also facing allegations from Julianna Margulies, Katherine Heigl, and Jenny McCarthy, among others. Four of his former assistants have also made claims against the actor, including 23-year-old Kayden Nguyen. Seagal's former legal representative, Marty Singer, called Nguyen's claims of sexual assault a "complete fabrication without a scintilla of truth." Singer is no longer representing Seagal.

These allegations come amidst Hollywood’s Time's Up initiative, a movement that is devoted to making workplaces across all industries safe for women, people of color, the LGBTQ+ community, and anyone who has dealt with sexual discrimination or assault.