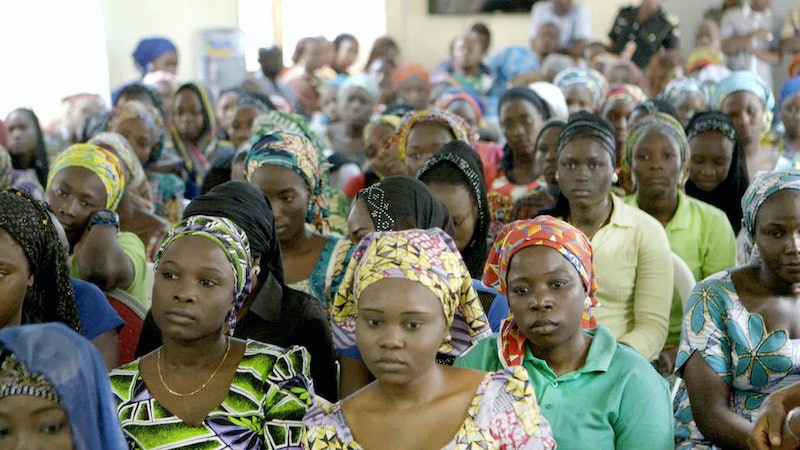 In April of 2014, 276 school girls from the Chibok region of northern Nigeria were kidnapped by the Islamic extremist terrorist organization Boko Haram. Some of them managed to escape on the very night they were captured, some escaped over the course of the three years they were held. In 2017, after the #BringBackOurGirls social media campaign swept the world with the help of Michelle Obama, and the Nigerian government orchestrated a deal, 103 of the girls were released. The new documentary Stolen Daughters: Kidnapped by Boko Haram, which airs tonight on HBO and will be available on HBO Now and HBO Go, reveals what has really has really happened to these girls after their release and how it deviates from the story the government has told.

Written and produced by Karen Edwards (HBO's Ebola: The Doctor's Story and Hunted: The War Against Gays in Russia) and directed by Gemma Atwal (HBO's Marathon Boy), Stolen Daughters visits a Nigerian government compound in which the Chibok girls are being housed and kept safe. But while the documentary celebrates their recovery and offers messages of hope and renewal, it's also rather critical of the Nigerian government and the lengths to which it seems to have gone to keep stories of Boko Haram under wraps. The released girls may have escaped the clutches of an evil, violent group, but they're still being controlled.

First, the filmmakers meet with the Chibok girls who live in a gated, secure compound closed off to the outside world. Their visiting family members are strictly regulated, and, even though the documentary crew have been granted access, the girls are told not to talk about what happened while they were held captive by Boko Haram. "We've asked them not to ask you about what happened in the forest," an official tells the girls. But the government's offering of security also comes with a veiled intimidation, an emphasis on secrecy, and the uncomfortable insistence that they should be indebted to their saviors. "You should be grateful that you are home and everything is fine. Don't talk about the forest," they are told again.

The girls' bizarre captivity and treatment is a surprising paradox to the image of recovery that the government seems to be trying to portray. At one truly strange moment in the film, the Chibok girls are brought to an amusement park called Magicland. Yet, as they ride on roller coasters and flying attractions, none of them smile. Most look confused. Eventually they ask to go home. The visit feels like an attempt to get the girls to forget about their experiences. A year later, the Chibok girls are given scholarships to the American University of Nigeria, but even there, their lives are tightly controlled. They aren't permitted to interact with other students. One girl, Hannatu, didn't even want to go to the school, because the campus is too close to Boko Haram territory. "I wouldn't have come here," she says, "but I didn't have a choice."

The whole thing reeks of some kind of an attempted coverup. That the documentary crew were secretly given diaries from some of the kidnapped girls is very telling. The officials caring for the girls insist that none of them came back infected with HIV or pregnant, though that seems highly unlikely. And even their counselors don't seem to know how to help them other than teaching them how to "prevent and avoid some things," though those "things" run the gamut from letting their memories affect their lives to getting kidnapped again. It's as if the powers that be just want everyone, including the women kidnapped, to forget the ordeal ever happened, though the war with Boko Haram continues to rage.

And the Chibok girls are only half of the story. Stolen Daughters also addresses the issue of the "Forgotten Girls," young women who were abducted without fanfare and forgotten about. The doc details that it's estimated that Boko Haram has kidnapped thousands of women and girls over the years. Large raids like the one in Chibok invite lots of attention, but many other women have been picked off individually, forgotten by the country and met with suspicion if they manage to escape. Unlike the Chibok girls, who were taken in by the Nigerian government on their return, many of the "Forgotten Girls" are then shunned by the community. Nigerians even suspect that some have been sent back into society by Boko Haram to become suicide bombers. They aren't given the aid or attention the Chibok girls have received, and their HIV and pregnancy stats directly counter those claimed by the organization caring for the Chibok girls. And still many Chibok girls are still being held captive, along with countless other forgotten girls as well.

Stolen Daughters: Kidnapped by Boko Haram is a heartbreaking and difficult documentary, and though there are moments of joy and hope dispersed throughout the film, the real punch is the reminder that not all outreach is created equal, and that not all stories of rescue have happy endings.