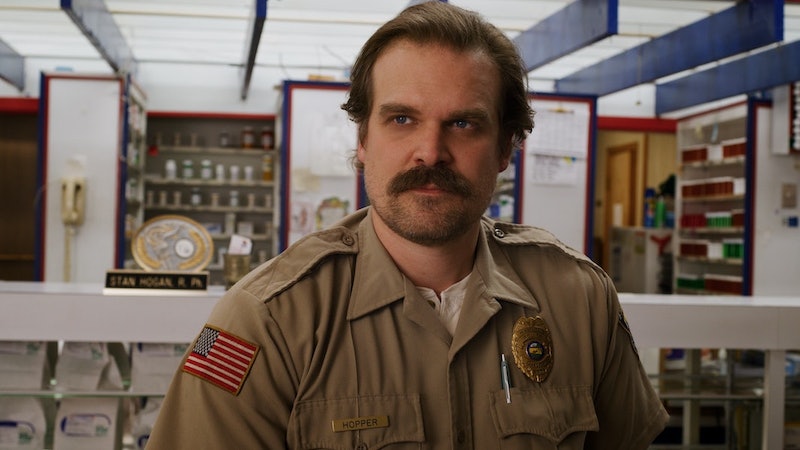 A battle against the Mind Flayer at the Starcourt Mall might just be an easier fight than battling a global health crisis. At least according to Stranger Things star David Harbour, who thinks that Jim Hopper would handle Demogorgons better than the coronavirus. Harbour appeared on the inaugural episode of the Los Angeles Times’ new weekly TV podcast, Can’t Stop Watching, on May 5 and offered insights into how his beloved character, the chief of police of the fictional Hawkins, Indiana, would fare amid the COVID-19 outbreak.

“At his core, he’s a protector, and he’s also anti-authoritarian,” Harbour said. “Like he deals with Mayor Kline (Cary Elwes), when he feels there are people in power messing up and endangering good, innocent people, I think he kicks into gear.” He continued, “So yeah, I imagine he would be telling people to protect themselves and going after the guys that are slow to respond.”

While Hopper seems willing to battle all evils, Harbour noted that his character might not fare well with the pandemic since it isn’t a physical thing that can be fought — like, say, a Demogorgon or a Russian spy. “I think the problem with this in particular is, even if you fight the political people you wanna fight, this virus is still floating around,” he said. “I don’t think Hopper deals well with scary, sad events that don’t make sense to him, as evidenced by the death of his daughter. He doesn't know how to function when there's not a real villain, so I think it would be far more complex than like a Demogorgon.”

Along with all other Netflix projects, Season 4 of Stranger Things shut down production in March due to the pandemic. While fans will presumably have to wait until late 2021 for new episodes, Harbour recently teased some major storylines for his character in Season 4 (yes, Hopper is alive and relatively well). Per Netflix’s last teaser, Hopper is now a prisoner in Russia in the aftermath of his sacrifice in the underground lab in Season 3. At Liverpool Comic Con in early March, prior to COVID-19 shutdowns, Harbour teased the upcoming season of Stranger Things, saying that Hopper’s backstory will finally be explored in a big way.

In reference to the Season 2 episode where Eleven (Millie Bobby Brown) finds boxes in Hopper’s attic labeled “Vietnam,” “Dad,” and “New York,” Harbour told fans: “So there are these three things that we’ve established in the season that if we don’t pay off, it means that they’re bad writers. And the Duffer brothers are very good writers.” He continued, “So I know specifically that in Season 4 we will give you a big, huge reveal about Hopper’s backstory.”

“It’s my favorite thing about him that you guys don’t know about him yet, but it has to do with these backstories of New York, Vietnam, and dad,” Harbour added. “And I’m really excited for you guys to know more about that, and it relates, of course, to things he’s doing with Eleven and Joyce and things like that.” Unfortunately, fans are going to have to wait even longer to find out what Harbour's talking bout. If only there were a sheriff who could help us get there faster...

More like this
'The Queen’s Gambit' Season 2 Tweet Wasn’t From Anya Taylor-Joy
By Mary Kate McGrath, Jack Irvin and Grace Wehniainen
Netflix Shut Down 'Bridgerton' S3 Rumours About A “Very Dark” Storyline
By Bustle
'Stranger Things' Finn Wolfhard Is “Proud” Of Noah Schnapp For Coming Out
By Sophie McEvoy
Ashton Kutcher Wants Danny Masterson “To Be Found Innocent” In Rape Retrial
By Jake Viswanath
Get Even More From Bustle — Sign Up For The Newsletter
From hair trends to relationship advice, our daily newsletter has everything you need to sound like a person who’s on TikTok, even if you aren’t.