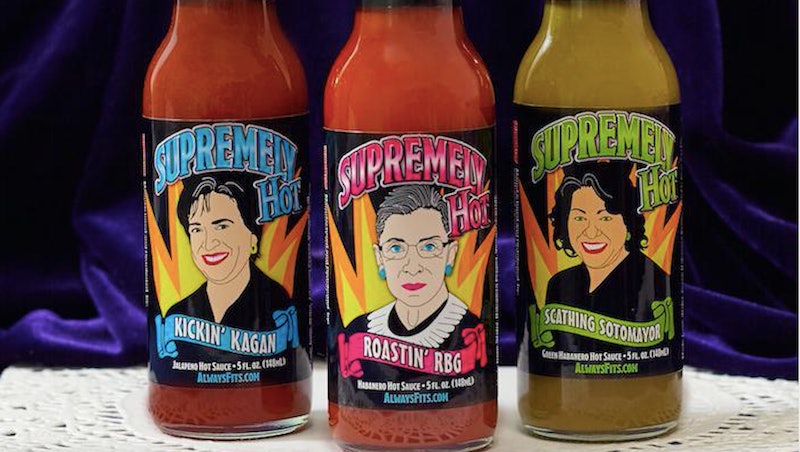 And today in Things I Was Delighted To Discover Actually Exist, we have this: The quirky website and e-retailer Always Fits has a trio of hot sauces available called Supremely Hot Sauce — and yes, they are, as their name might imply, a set of hot sauces themed after Justices Kagan, Sotomayor, and Ginsburg of the Supreme Court of the United States. I love hot sauce. I greatly admire these three justices. And as a result, I have never, ever felt compelled to buy a set of hot sauces quite as much as I want to get out my wallet for this one.

The Supremely Hot trio isn’t actually new; Always Fits originally launched it back in March in honor of Ruth Bader Ginsburg’s birthday (she turned 86 on March 15 ). Happily, it’s still available now at a price of $27 for a set containing all three sauces — one five-ounce bottle of each variety — and what’s more, if you want to order a case (or two, or three, or...) of just one of those varieties, the product listing notes that all you have to do is email Always Fits; if you do, they might be able to work something out for you. Hoorah!

Although the sauces do come in gradations of heat — Kickin’ Kagan is the mildest of the bunch, while Roastin’ RBG is to hottest, with Scathing Sotomayor occupying the middle ground between the two — note that that’s not a pronouncement on the fierceness of each of the justices by which they’re inspired. They’re all, as Always Fits points out, masters of scathing dissents with fiery intellects — and they’re all as unique as the sauces bearing their names are, too.

If the name “Always Fits” sounds familiar to you — especially in conjunction with the phrase “hot sauce” — there’s a reason for that: Items featured on the site go viral from time to time, usually due to their off-beat or nostalgic nature. One such item, in fact, was another set of hot sauces, this time themed after the Golden Girls. Still available today, the line features a flavor each for Bea Arthur’s, Betty White’s, Estelle Getty’s, and Rue McClanahan’s characters on the iconic sitcom — flavors which, similarly to the Supremely Hot set, are either habanero-based or more focused on jalapenos.

If hot sauce doesn’t do it for you, though, there are loads of other hilarious and delightful items available at Always Fits — including a number of Supreme Court Justice-themed options. If, for example, you wanted to decorate your tree with RBG this holiday season, you can absolutely make that happen. Heck, and yes.

Head on over to Always Fits to grab yourself a Supremely Hot set of your very own — or to look for anything else that tickles your fancy. Happy shopping!