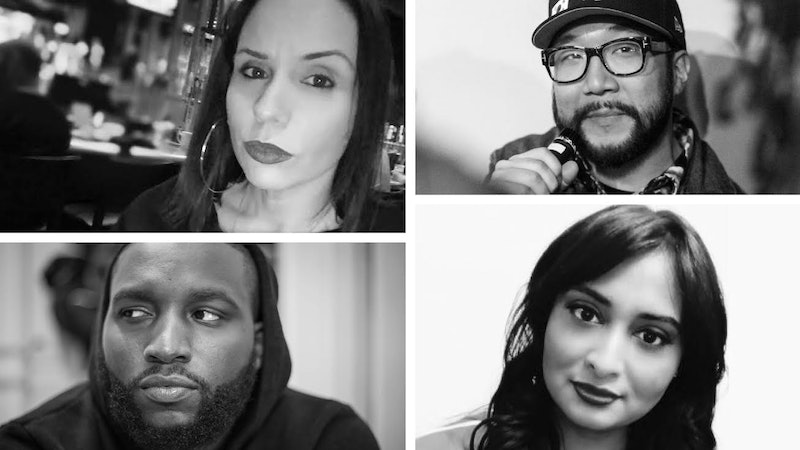 It was hard for social media to ignore Lifetime's docuseries, Surviving R. Kelly, which aired January 3 and tracked the alleged sexual assault and abuse at the hands of R&B singer, R. Kelly. But this story is not new — over the course of decades, black women have been bringing the story to the forefront, all starting when former VIBE magazine editor Danyel Smith broke the news of Aaliyah and R. Kelly's alleged marriage certificate in 1995, (Bustle reached out to R. Kelly's camp for comment.) and with the genesis of the hashtag #MuteRKelly on social media.

But what's next? That answer depends on our allies — including those in the music industry, as well as those who are simply watching this story unfold. Black women can no longer be responsible for bearing the brunt of the pain of our own hyper-sexualization, and then having to explain to others how and why we should be treated with the same respect of our counterparts. The onus is no longer on us — it's up to everyone else to be the change.

Bustle spoke to four veterans of the hip-hop industry who've made it their mission to make sure that their voices are raised in solidarity with black women, and what they would urge those who want to be better allies to know.

Kathy Iandoli is a music journalist who has written for Billboard, HipHopDX, and more. Her book on the history of women in hip-hop, God Save The Queens, will be released this March by Harper Collins.

"I think you’re dealing with people who may or may not want to go down [that] road [of confronting the R. Kelly allegations], because of what it might trigger for them. There’s a part of me that says, 'Wow, that says a lot about you if you’re not talking.' And I get it. I remember a while back, somebody hit me up and said, 'You never tweeted the words Black Lives Matter.' And I said, 'Because I’ve been in these streets shouting it.' And this is what I say to black people: Let me help you with [the] heavy lifting of this. What I was pointing out in my tweets is that [mainstream media's ignoring of the allegations against R. Kelly] would have never happened if these were all white girls. It’s gross.

I think we have to take it offline. I’m sensitive to the subject for a number of reasons beginning with being a human being and being a woman. But I’ve been in scenarios where I’ve been at listening events and I’ve seen how artists speak to black women, versus how they speak to me. And she’s a journalist at a top-tier publication, meanwhile they speak to me like I’m Tina Fey.

If a white person is reading this: Yo, white person to white person, speak out about it. And say the word 'black.' Be proud of the word, it’s a beautiful word. Just f*ckin say it. As women, we have to do our part. Speak out, and pull people to the side."

Mike Yi has been a fixture in the hip-hop media scene since 2007. Most recently he served as senior music editor at VIBE before joining Genius in 2018.

"Historically, women of color have been ignored and have always been kind of ostracized for coming forward, whether it be sexual accusations against men they worked with, or just racist comments in the workplace, or abuse. So it’s our duty right now, if we do consider ourselves allies, to stand with them, and not ignore their voices, not ignore their claims, not to make them feel like victims more than they already [are]. I think it’s pretty clear that if a lot of R. Kelly’s [alleged] victims and the young women that accused him, if they weren’t young black women, if they were young white women, there would definitely be way more coverage on it. I think there would be even, from a legal standpoint — I think he would have been prosecuted years before this. It’s kind of crazy that it took a docuseries on Lifetime for, not just people of color, but for every outlet around the world to really take notice and be like, OK, let’s do something.

I would say, even though for years and years black women and women of color have been brushed under the rug when it comes to accusations and cases of sexual abuse, to not give up, even though for years it probably has seemed like a hopeless road to go down. Because year after year, we read about cases in the news where [there is] not only sexual violence or sexual abuse, [but] where women have been abused physically by their spouse or by police. And continuously, we have seen these stories either get swept under the rug or the abusers have gone free. I think Cyntoia Brown is a great example. The light at her tunnel at some point seemed so dark, but now things have changed."

Sowmya Krishnamurthy is a music journalist and pop culture expert. She has contributed to outlets including Billboard, XXL, and Rolling Stone.

"I think first and foremost, black women’s issues are all of our issues. Regardless of race, regardless of gender, it’s a much larger conversation. It shines a light on issues that we face as a culture and we really can’t have a holistic conversation if we’re going to be siloed and only focus on issues that directly and personally affect us. So that’s just first and foremost, that human rights are universal. It disappoints me when I see individuals kind of cherry picking when you want to be part of certain facets of conversation, especially as it relates to black culture or minority groups. I think this is a very important dialogue that needs to be had for all of us.

There are a lot of individuals who seem to have opinions about everything under the roof except women’s rights, and the minute it starts to talk about alleged sexual abuse or alleged domestic violence, they get really quiet. And I think this transcends race. It transcends gender, it transcends economy, and that’s just really sad, that as a society, women’s rights, especially women of color, are deemed so unimportant, oftentimes even by people who seem ardent and outspoken about everything else under the sun.

Let’s have these difficult conversations, and understand we’re all figuring it out. But I think at this point, there’s two sides in history. And I really implore not just the music industry and artists, but everyone: Now is the time to do a gut check and just figure out what side of history you want to be on.

We all have privilege in our own ways, and on a multitude of levels, perhaps some people more than others. But I think again, we’re just at [a] place in time where we must all be mindful of what our privilege is and hopefully use it for good, and try to help those who may not be in such a privileged place. But I do think that the notion of covering your eyes, of covering your ears, those days are gone. [W]hether you have one follower or a million followers, you have a platform, and I really encourage you to use it to speak your mind, because people are listening whether you realize it or not."

Bernard Smalls is a music photographer and tech/gaming writer for HipHopWired and CASSIUS.

"Growing up, of course I had a black mother, and they always tell you, 'Treat somebody as if they were your mother.' I can’t imagine not being able to know if my daughter’s alive, or knowing she is alive and not being able to talk to her, not being able to see her, not knowing what she looks like. I feel the victim blaming is something we need to understand.

We've been ignoring black women for a long time, and 99 percent of the time they were right. So I think it’s really important that we’re standing behind them and we believe them, and when they tell us that things like this are going on, we should really, really take this very seriously. If your mother came to you or someone in your immediate family came to you with a story like that, you would listen, you would believe them. So why not do the same for someone else?

Let's stop supporting R. Kelly. Like literally mute him, period. You keep the conversation going, period. You don’t let this just become something that happened over the weekend, or a Twitter moment. You keep it going, and whenever you can, if you see a story about it, you share. If you see someone talking reckless, saying really ignorant stuff about it, you correct them, let them know that what they’re doing is not cool. So I feel that’s what I’m trying to do, with anyone I personally know. I keep the conversation going. This is not the hill you want to die on. There are plenty of people you can fight for, he doesn’t need it. He’s not worth it.

As a black man, I’m sorry for pretty much mishandling it. I apologize, I should have listened to y’all a long time ago, but I’m here as an ally, I’m here, I’m taking a stand with you against anybody, not just R. Kelly. I’m here to listen to you and what you have to say, and you have more allies than enemies in this fight."

Quotes have been edited and condensed for clarity.

More like this
Chelsea Woody On Shattering Stereotypes In Surfing
By Leah Groth
The Church Of Scotland Votes To Allow Same-Sex Marriages
By Sam Ramsden
'Gentleman Jack’s Cast & Crew Are Keen On Season 3, Too
By Frances Stewart
'Derry Girls’ Dylan Llewellyn Will Star In C4’s New Queer Comedy
By Rachel Mantock
Get Even More From Bustle — Sign Up For The Newsletter