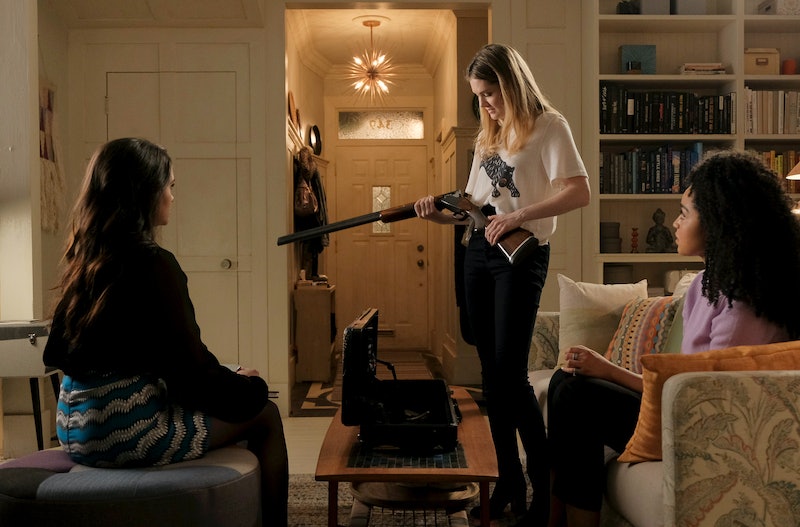 The women of The Bold Type are close. Close enough that, even when they vehemently disagree with each other, they can usually work it out. We saw it earlier in Season 2 when Jane and Kat had a dialog on race and privilege, which was pretty intense. But on the July 17 episode of The Bold Type, the show tackles gun control, and it nearly drives the group apart. Sutton has a gun on The Bold Type, and it forces both her and Jane to come to terms with their assumptions and opinions about the topic of gun control.

Jane doesn’t even know that Sutton has a gun in their house — while searching for a “going back to work at Scarlet” outfit, Jane stumbles upon what looks like a clarinet case. When Sutton informs her that, actually, it’s her shotgun (its name is Betsy) and not a musical instrument, Jane freaks out. It would have been easy in theory for Sutton to have just told Jane about the weapon in their apartment in the first place, but according to Meghann Fahy, who plays Sutton, keeping the peace was paramount. “I think [Sutton] anticipates Jane’s reaction. And I think she probably wants to avoid that because she wants to avoid friction in her friendship,” Fahy says. As Sutton mentions in the episode, she knew Jane would have a different opinion, and it wasn’t worth the argument, which is something Fahy says many can relate to.

“That was something that we wanted to touch on, because I think a lot of people feel that way about similar issues and politics and general, and we really don’t want to discuss different opinions on a topic,” she says. “What was cool to see was how Jane and Sutton are both out of their comfort zone and have honest, progressive conversations on the topic, and their friendship gets stronger because of that.”

Jane and Sutton’s journey from besties to feuding friends and back to besties by the end of the episode isn’t an easy one. Both women don’t stand down from their corners right away — that is, until they both realize that they’ll have to find some way to meet in the middle if they’re going to get past it. Sutton is against assault rifles, but she doesn’t see how mass shootings have anything to do with her, a responsible gun owner. She used to shoot skeet in high school (though she doesn’t do it anymore), and so she sees guns as a method for sport. Jane, who grew up a few miles from Columbine High School, remembers the shooting and freaks out when she holds Sutton’s gun, because she can feel that it’s a killing machine she says. Agreeing to disagree here isn’t an option.

The Bold Type is really great at showing as many sides of a story as possible, and in this very nuanced, very particular debate, it was no different. “What we did try to do was say, ‘Hey, this conversation is not black and white. There are a lot of different opinions to this,’” says Fahy. “I hope that people will take away from the episode that there are many ways to have an opinion. The most important thing is to listen to someone else and hear them out. It’s easy to share your opinion and share your voice, and that’s so great, but it’s also important to open your ears.”

By the end of the episode, Sutton realizes she has a choice — she can make Jane uncomfortable, or she can give up her gun. Sutton is holding onto her shotgun because she is holding onto a part of her former self, a self that wasn’t spinning out of control like the Sutton of today. So, she decides to let it go, bringing it to a special shop in Brooklyn that makes beautiful things out of unwarranted firearms. Jane should expect a pair of earrings.

For Fahy, Sutton’s decision to honor her friend and not her past was paramount. “That’s what our show is about. Sutton decides what’s worth it for her, and I think she’s more interested in having a close relationship with her friend, and her friend needs to be comfortable more than anything else,” Fahy says. “That’s the journey she goes through — she’s willing to let go of the past of hers [for Jane].”

Sutton is a great shot and a gun enthusiast, but she’s ultimately not hitting the rifle range every day for fun. Having a gun is a part of her backstory that she just hadn’t let go of yet. Had Sutton headed to the range more often or been more die-hard about her shooting activities, perhaps she wouldn’t have given up her gun for Jane. Maybe Jane would have known about the gun activities up front in that case.

The Bold Type does a decent job of underlining the gun control debate in the sense that no one is ultimately right or ultimately wrong. There are so many facets to the gun control issues that The Bold Type couldn’t even touch on all of them. For instance, New York City law is notoriously strict on guns, and a permit is required to have a shotgun within city limits. The show didn’t touch on whether or not Sutton had an New York City permit for her gun, so it would be illegal if it was bought in Pennsylvania, where Sutton is from, and never registered in New York. That brings a whole other host of permit and licensing issues from state to state — there’s simply not enough time for a 43-minute show to tackle it all.

But in the three-quarters of an hour that The Bold Type had, the show managed to highlight all the difficulties of this particular debate. And even though Sutton and Jane found it tough in the beginning, the show made sure that their friendship was a priority above all here.

More like this
It’s Official: 'The Bachelorette' Is No Longer A Fairy Tale
By Samantha Allen
Everything To Know About Netflix’s 'Never Have I Ever' Season 4
By Jack Irvin and Gabrielle Bondi
Meet The New Team Of Residents Joining 'Grey's Anatomy' In Season 19
By Brad Witter and Sophia Moore
Dr. Anna Pou Is Still Practicing Medicine After Facing Murder Charges
By Brad Witter
Get Even More From Bustle — Sign Up For The Newsletter