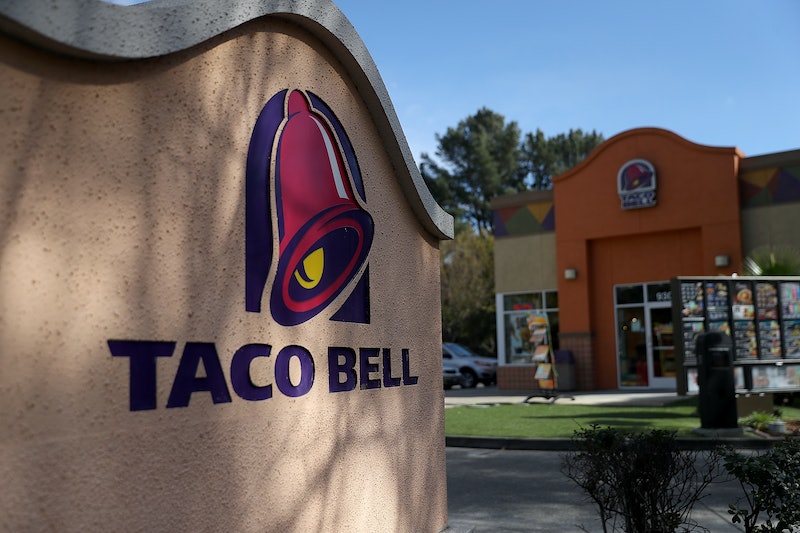 Taco Bell offers a ton of different things to customers: huge savings on new menu items, Taco Bell Cantina restaurants that offer exclusive dishes and drinks (and are expanding all over the country), and even wedding accessories for taco fans' big days. One thing the brand hasn't yet introduced (and that we would truly love and appreciate) is nationwide delivery. In the age of quick, easy in-app food delivery platforms, tons of restaurants have teamed up with the services to offer customers the chance to get their favorite foods delivered straight to their doorsteps. According to the topic of conversation at one of the chain's recent conventions in Las Vegas, Taco Bell is talking about nationwide delivery — or at the very least, the possibility of it.

Food & Wine reports that Taco Bell has been hinting at a delivery program as early as 2015, but things really got put into motion by a Facebook comment recently directed at the company — posted by third grader Kinsley Young. Food & Wine adds that the comment originated as a "persuasive writing exercise" from the 9-year-old's class — I guess paying attention in school actually does pay off (ideally in the form of burritos and Baja Blasts). “Today I really wanted Tacos, but my mean mom wouldn’t take me and I’m only nine so I cannot drive," she began in the comment, according to a CBS affiliate in Baltimore. After that standout intro, she goes on to list some extremely valid reasons on why Taco Bell should consider delivery, including "what if somebody just had surgery and cannot drive," or "if you're feeling lazy but really want Nacho Fries." For good measure, she reminds the company that a delivery program would "be a way to make more money." I wish I was that business-savvy at nine.

Not only did Kinsley Young's viral comment get her a speaking opportunity at the Las Vegas convention, it also caught the attention of the brand's President of Communications — which is always a good sign. He agreed that the company was in need of a nationwide delivery service, and acknowledged the importance of moving forward with creation plans. Well done, Kinsley, well done.

Until Taco Bell announces a fully-fledged delivery program, you can in fact order from them via Grubhub (which is hopefully up and running in the area that you live in). Last February, the Mexican food chain and KFC partnered with Grubhub to start offering delivery in a variety of locations. The collaboration between Yum Brands (which oversees Taco Bell, KFC, and Pizza Hut) and Grubhub means that the chains will be more readily available than ever to order from on the platform, so that you can eat to your heart's desire.

Hopefully, Taco Bell will take Kinsley Young's speech to heart and a nationwide delivery program will be instituted sooner rather than later — I think I speak for a lot of us when I say that it's long overdue.