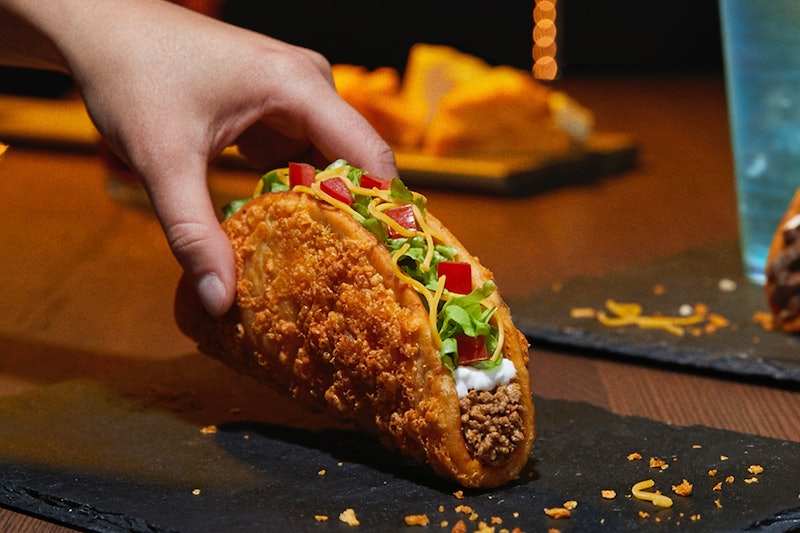 The end of summer always brings a roller coaster of emotions. We might feel restless, we might feel renewed, we might feel hungry. I mean, I always feel hungry — but even hungrier. Well fear not, the Taco Bell Toasted Cheddar Chalupa is here as a total game-changer for the fall season. What makes it a Toasted Cheddar Chalupa as opposed to the traditional Chalupa? Well, they bake cheddar cheese straight into the shell, so you're going to get a lot of that cheesy goodness.

And they've taken it very seriously. The company has used six-month aged sharp cheddar cheese and baked it on to create a "crispy blanket of flavor and texture, unlocking a whole new cheese experience," per a press release. Those are some big words, so hopefully the reality can live up to the hype — but I have a sneaky suspicion it will.

“At Taco Bell, we get excited by the ‘what if’s’ we can dream up and bring to life for our fans — and the Toasted Cheddar Chalupa is an example of just that,” Liz Matthews, chief food innovation officer at Taco Bell Corp, said in a press release. “We know cheese makes everything better, and baking aged cheddar into the shell of an already iconic product is a game changer our fans will love.”

You can get the Toasted Cheddar Chalupa filled with beef, chicken, or steak — and it also includes the classic toppings of lettuce, diced tomatoes, cheddar cheese, and sour cream. And you can also make it a veggie option, if you so choose. On its own it comes out at just $2.49 — but you can also get it in the $5 Box, with two Crunchy Tacos and a medium drink. To be honest, it looks like a pretty delicious option.

The chain has been making a lot of headlines recently. We just found out that Taco Bell is removing nine menu items — including two of the Doritos Locos Tacos, the Fiery and Cool Ranch varieties, may they forever rest in peace. You'll also have to wave goodbye to the Double Tostada, the Power Menu Burrito, and more — and get used to a whole new set of combos. Life is a rocky road sometimes.

But they've also been in the news for some happier reasons — including Taco Bell Back to School collection, which will let you get all decked out Taco Bell style with everything from hoodies to pencils. There has also been the test of Taco Bell's new breakfast burritos — three delicious offerings, one of which has an actual hash brown stuffed inside. Let's just take a moment and recognize genius as it walks among us.

If you prefer a little sweet treat, then Taco Bell has you covered with the Cherry Sunset Freeze — a slushy drink with so much goodness, it has two flavors in one. Feast yourself on this pineapple-cherry mashup and enjoy the sunset of summer.

But I have to say, no matter what kind of menu upgrade you're trying to achieve, adding cheese to it is always a good thing. So it's easy to see why Toasted Cheddar Chalupa is destined for great things. Take something great, bake cheese into it, make it greater. That's what fast food is all about — and I am here for it.