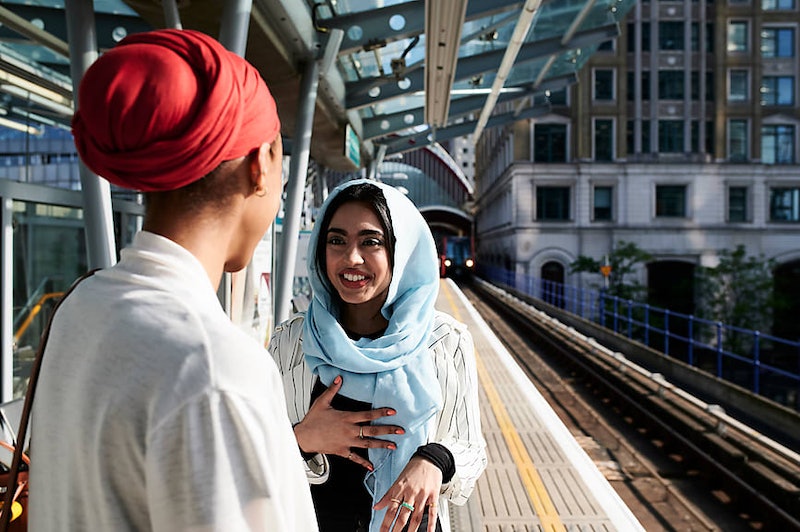 As you grow up, you get taught a lot of very important lessons: look left and right before you cross the road, say please and thank you, always eat with your mouth closed. One of the biggest ones, though, is "don't speak to strangers." Yes, guys, we all know the old maxim that is there to keep you out of harms way. However, this behaviour might actually not be serving you at all. Talking to strangers might actually be good for your health.

The BBC recently published a piece of research by behavioural scientists Nicholas Epley and Juliana Schroeder. Epley and Shroeder of the University of Chicago found that getting out there and getting chatting might be just about the best thing that you can do, and that people may actually be underestimating how much of a positive impact can be gained from connecting with others.

For the study, which was called Mistakenly Seeking Solitude, the pair tasked respondents to pluck up the courage to have a chat with fellow commuters. Epley and Shroede explain in their article for the BBC:

"We asked bus and train commuters in Chicago how they would feel about striking up a conversation on their morning commute, compared to sitting in solitude or doing whatever they normally do. Most thought that talking would lead to the least pleasant commute."

So, the commuters in question estimated that only around 40 percent of their fellow commuters would actually be willing to have a conversation with them. However, it turned out that those who started a little chat were pleasantly surprised. Because 100 percent of those who started a chinwag had a good response and a nice little chit-chat. Leading to a boost in self confidence and a feeling of achievement.

According to further research by the pair, it appears that all these good vibes can in fact be spread to others, too. They report that, during further experiments, they found that if you start a chat with a stranger, you might in fact light up their day. Which is pretty cool right? In a different experiment done in a waiting room, they found not only did the people they encouraged to chat have a better time but so did the people they spoke to. Dreamy.

"These brief connections with strangers are not likely to turn a life of misery into one of bliss. However, they can change unpleasant moments - like the grind of a daily commute - into something more pleasant. Humans are inherently social animals, who are made happier and healthier when connected to others. Feeling isolated and lonely, in contrast, is a stress factor that poses a health risk comparable to smoking and obesity. Having positive social relationships has been put forward as a key ingredient for happiness, more significant even than how much we earn."

The thing is, though, for most people, myself included, unwanted attention or unsolicited conversations are worst nightmare kind of territory. But Shroeder and Epley point out that the very act of reaching out and saying hello can be better received than people realise. Few people start conversations with others but most people are happy to chat if you are communicating with good intentions.

One of the reasons put forward is that the whole experience of talking to other people can help you realise that every person is unique and has just as complex a web of emotions, thoughts, feelings as you do. Ones that can help you learn and expand your own mind.

So go on, start talking to a stranger on the tube. I dare ya.