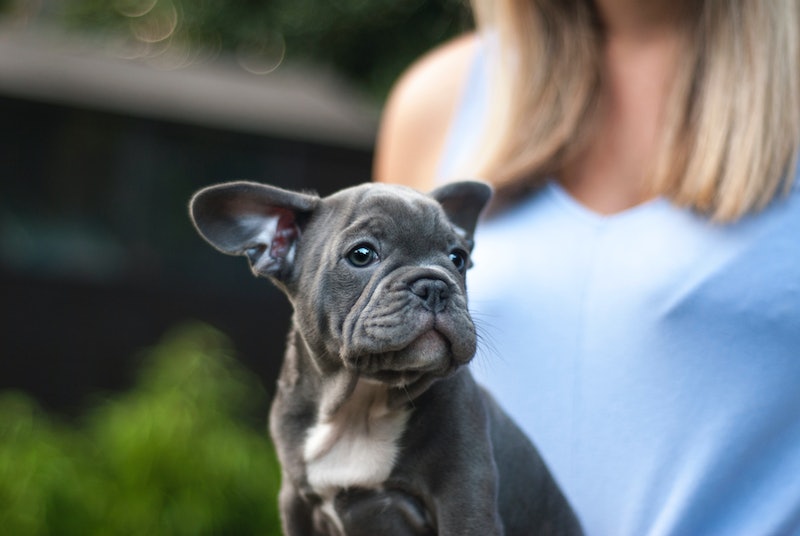 I talk to my dogs more than I talk to most human beings, and I've always wondered if it makes me an animal lover or... something else. Science says I can breathe easy, though, because talking to your dog is a sign of intelligence, as well as a sense of creativity and imagination. Oh good!

When we talk to our dogs, we assign them a personality — and it turns out there's a name for the way we give humanlike tendencies to animals and inanimate objects: It's called anthropomorphising, which Dictionary.com defines as, "to ascribe human form or attributes to (an animal, plant, material object, etc.)". Yes, you can even talk to plants, and science says it's OK. It involves the same psychological processes as recognizing the mind of another person.

In fact, Nicholas Epley — a behavioral science professor at the University of Chicago — told Quartz that anthropomorphising is "a natural byproduct of the tendency that makes humans uniquely smart on this planet." So, excessively talking to my dogs doesn't make me strange. It makes me uniquely smart. (Win!) It's an indication of our innate need for companionship. We give things — like our cars — a personality because it helps us feel closer to them. It enhances our bond with these things, which we treat as an extension of our identity.

Whereas you might feel silly talking to your car (I don't!), it's perhaps surprisingly an indication of your self-awareness.

And it's an ability so unique that no other species can pull it off. We already know that animals communicate with each other; and certain animals, like elephants and beluga whales, can even learn to mimic human language. But assigning a mind or personality in other creatures or even inanimate objects is uniquely human.

While the same can't be said for inanimate objects, there's a whole field of study behind how dogs process language and communication; indeed, research knows that they can understand a great deal of what we say to them. Rico the border collie, for example, can understand over 200 words and learn new words as fast as many children.

Talking to your pet and inanimate objects is a sign of intelligence, as is talking to yourself — something else we often consider kind of weird. In one intriguing study, psychologists Daniel Swigley and Gary Lupya gave 20 people the name of an object and told them to find it in a grocery store. In the first round, the participants had to remain silent. In the second, they repeated the object's name aloud while they searched for it. Guess what? This second group was able to find the object more easily.

Communication: It's good for the brain — whether it's with another human, with your four-legged pal Fluffy, with your car, or with... yourself. Stay chatty, my friends.

More like this
The Case For A Hard Launch Summer
By Morgan Sullivan
Are Gemini & Scorpio Compatible In A Relationship?
By Kristine Fellizar
The 10 Best Cat Puzzle Feeders
By Lauren Moison
The Most Compatible Life Path Numbers, According To Numerologists
By Kristine Fellizar
Get Even More From Bustle — Sign Up For The Newsletter