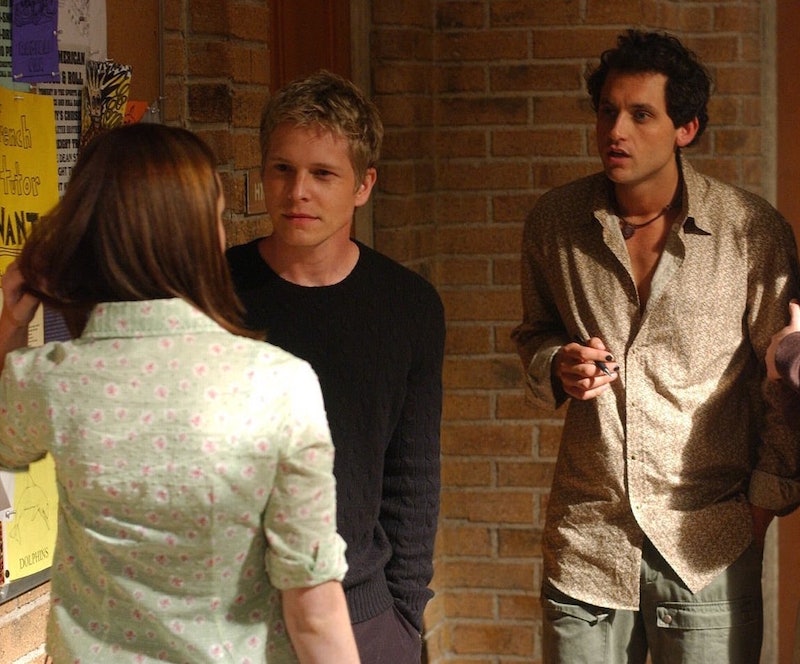 Like the rest of us here on earth, Tanc Sade — the actor who plays the charming Finn in Gilmore Girls — is looking to uncover the greatest — and most spoiler-filled — question of our time. Or at least of our time after the release of the Netflix revival: Who is Rory's future baby's father? His take on this situation, though, is probably one you've never considered. The actor is proposing that it could be his character, rather than any of the boyfriends that Gilmore Girls fans have been rooting for. He wrote, "You sure you know who the baby daddy is?" alongside a photo of Finn and Rory catching eyes. I know, right? Though this should be taken (mostly) as a joke, it's crazy enough that it just might be true. Or, at the very least, a possibility worth keeping in mind.

At first glance, the idea seems like a huge stretch. Rory and Finn? What? There's no reason to believe that these two are even attracted to each other. However, Rory never mentioned if she was attracted to that Wookie or not, and she dated a guy she barely liked for years. Considering those two things, a Rory and Finn fling isn't that outlandish.

Now, let's think back to that scene in "Fall". You know the one I'm talking about. Rory finds herself standing in the middle of an abandoned Stars Hollow street. In front of her are three men wearing gorilla masks and top hats. “Well, I’ll be damned,” she says, when she recognizes them as the members of Yale's Life and Death Brigade: Colin, Robert, and, yes, Finn. In the following scenes, they — along with Logan — embark on a lavish, expensive adventure, set to the tune of a "With A Little Help From My Friends" cover.

Whether or not Finn and Rory could have ended up together on the night of the Life and Death Brigade reunion, that's a different story. It appeared as if Rory woke up in Logan's room the following morning. However, Logan gave Rory keys to her own room, and we don't see Rory and Logan together in Logan's room during the night time. Only when Logan wakes up does he ask her, "How long have you been sitting there?" so there's no proof she stayed the night there. Ruminate over that.

Now, there's another possibility. Suppose that Rory and Finn didn't end up together on this night. Could it have happened before or even after this rendezvous? I don't see why not. I do see why it's a possibility that we would never hear about it from Rory. Who's she going to tell? Lorelai? Maybe, but they don't seem so open about that stuff anymore. (Rory is, after all, in her 30s now.) Logan? Definitely not. No one else in her Stars Hollow world would understand — or even care — so she could have just kept it to herself. Again, she's in her 30s; she can sleep with whomever she pleases. The town doesn't have to hear about it, which means that we might not either.

Could Rory sleeping with Logan's good college friend be construed as deceitful? Sure, but keep in mind that Rory and Finn have also been friends for a long time. (Or at least they were old college friends. I'm not sure if they kept in touch since then.) For all we know, Finn's single. Sure, Logan and Finn are college pals, but Rory and Finn getting together doesn't seem crazier than Rory sleeping with a subject for an article she never wrote. Or with an engaged Logan. I'm not saying Rory's completely amoral, but she doesn't make the best choices romantically.

Plus, Rory always seemed to like Finn. Not that she ever fawned over him or appeared as if she wanted to date him, but more in a "this eccentric Australian mate seems interesting" kind of way. You have to admit, Finn has an ineffable appeal. If Rory succumbed to his charm, you can't really blame her. In omnia paratus, right?