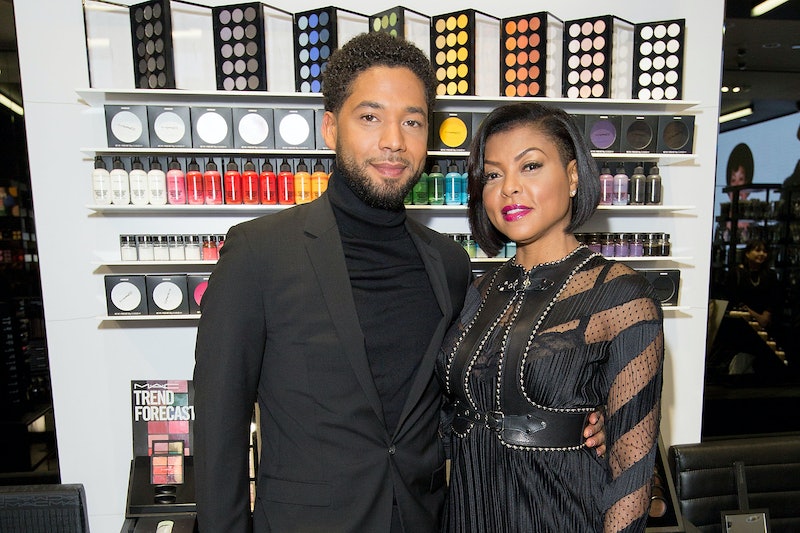 One of Jussie Smollet's Empire costars is standing by his side. Taraji P. Henson responded to Smollet's charges being dropped in a supportive statement given to USA Today on March 26. Henson expressed nothing but love for Smollett, while also revealing she always believed he was innocent.

"I'm happy that the truth has finally been set free, because I knew it all along," she said. "We're all happy for him, and thank God the truth prevailed." Henson didn't stop there, but also said about the actor, "I know the type of activism this young man does in his community, I know that he's a giver – he's not an attention-seeker." She continued,

"When I know someone, there's nothing you can say to make me flip on them, and that's what we miss in this world. We need people that stand by us. Whatever happened to that? Why are we so easy to believe strangers over people we know?"

On March 26, Smollett's lawyers announced that the Cook County State's Attorney's Office had dropped all charges against the actor. Prior to that, Smollett had been arrested on disorderly conduct charges for an allegedly staged attack that he claimed was a hate crime.

"Today, all criminal charges against Jussie Smollett were dropped and his record has been wiped clean of the filing of this tragic complaint against him," his lawyers said in a statement given to BuzzFeed News. "Jussie was attacked by two people he was unable to identify on January 29th."

The Cook County State's Attorney's Office also released a statement to Bustle and called it "a just disposition and appropriate resolution to this case."

If anything, Henson said Smollett's case should teach others that victims should be believed. "That's why a lot of people, especially females, feel like they can't come forward saying they've been raped," she told USA Today, before adding,

"I believe that's why we have a whole #MeToo movement, because women have felt they couldn't come forward because they'd be criminalized in some way. Movements don't just come out of the sky – movements happen because they're needed. You have a group of people who haven't been heard."

In addition to Henson, 20th Century Fox Television and Fox Entertainment, the studio that makes Empire, released the following statement:

"Jussie Smollett has always maintained his innocence and we are gratified on his behalf that all charges against him have been dismissed."

As for Smollett, he spoke to the media (as seen above) outside the court house after the charges were dropped. "I've been truthful and consistent on every single level since day one," he said. "I would not be my mother's son if I was capable of one drop of what I've been accused of."

According to the prosecutor on the case, Smollett had not been "exonerated. "We believe he did what he was charged with doing," First Assistant State's Attorney Joseph Magats told Chicago's local ABC affiliate WLS on March 26. "This was not an exoneration. To say he was exonerated by us or anyone else is not true." He continued explaining the reason he dropped the charges was because his "number one priority" is to combat "violent crime and the drivers of violence." Per Magats, "And we look to our resources to do that, and I don't think that Mr. Smollett is a driver of violence or a violent individual."

At this time, it appears that Smollett is staying out of the spotlight as much as possible. Henson even said she hasn't spoken to Smollett following the charges being dropped against him. Previously, producers of the FOX drama removed Smollett from the final two episodes of the season, but Henson said she is unsure if he's returning to Empire.