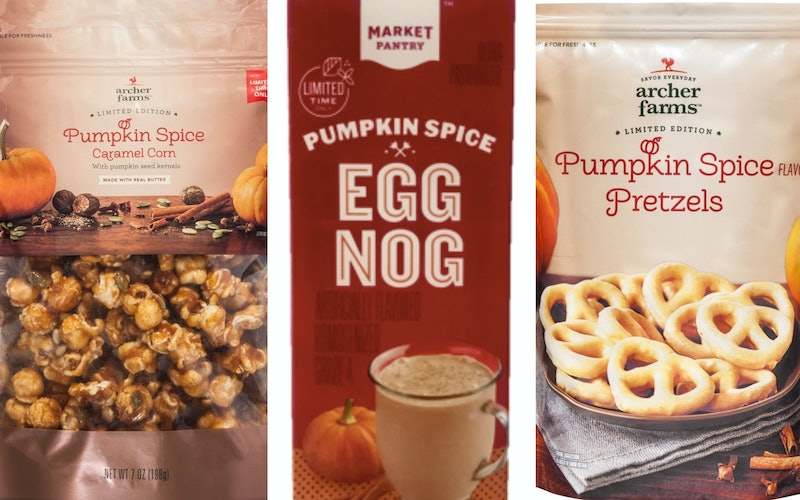 As autumn gallops ever closer, the House of the Red Bull’s Eye just announced their fall food collection for 2018 — and predictably, though certainly not disappointingly, it turns out that tons of new pumpkin spice items are coming to Target soon. Indeed, according to the Daily Meal, most of these sweets and eats will hit shelves on Sept. 2, which is a mere week and a half away. Are all my dreams finally becoming true? Well… maybe not quite, but this is all very good news, indeed. I’ve learned to embrace the Coming of the Pumpkin Spice Messiah each fall, even if it seems to be arriving earlier and earlier every year.

Target’s 2018 fall food collection consists of 16 limited-edition items, reports Refinery29. Ranging from baking mixes to coffee and snacks to cold, refrigerated drinks, they’re largely new offerings; only three of them have made previous appearances during Pumpkin Spice Season. All of that adds up to some incredibly exciting times for my pantry, and I can’t wait to go out and stock my kitchen with all of them.

However, it's worth noting that pumpkin spice isn’t the only flavor profile on display in Target’s fall food line. Indeed, there’s actually a wide variety of tastes to be had, including maple pecan and caramel apple. Of particular interest (to me, at least) are the Caramel Apple Bar Mix, the Almond Toffee Coffee, and the Maple Pecan Milk. Why those three items? I love cookie bars; coffee that sounds like it’s actually a candy bar is one of my favorite things; and I’m just flat-out intrigued by the idea of something called “Maple Pecan Milk” — ergo, these options fascinate me.

But, I mean, let’s face it: The pumpkin spice picks will always reign supreme. Here are the six items featuring that most venerable of flavors coming to Target in the very near future: