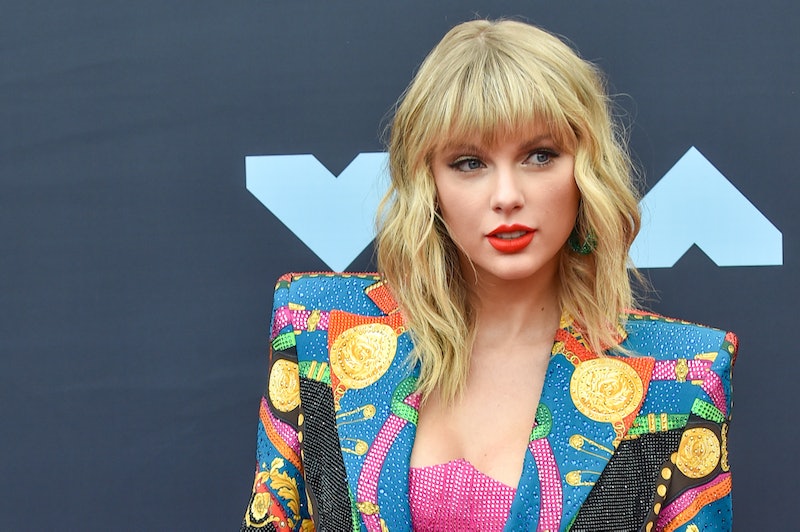 After more than a decade in the spotlight, Taylor Swift knows what it's like having every aspect of her life, including her physical appearance, analyzed by the public — and she's over it. During a recent interview with Apple Music Beats 1 DJ Zane Lowe, Swift praised Jameela Jamil for her "body neutrality" advocacy and shared her support for the movement as a whole, which posits that how people feel about themselves should have nothing to do with their appearance or their bodies.

"Thank God we’ve had #MeToo movements and moments where we’re looking at ourselves as a society and we’re looking at internalized misogyny. We’re looking at the way we treat critiquing women’s bodies," Swift said, reflecting on the way Hollywood has changed over the course of her career. "We have amazing women out there like Jameela Jamil saying, 'I’m not trying to spread body positivity. I’m trying to spread body neutrality where I can sit here and not think about what my body is looking like.'"

Jamil responded to Swift's comments with an Instagram post, explaining she was proud that her work with the body neutrality movement "reach[ed] even the most scrutinized and harassed people, and help[ed] in any way." The Good Place star explained that "body liberation is all I can advocate for," and added that learning how to "be free" of her body has been a big help to her mental health. "Ignoring it ... and getting on with my day and trying to utilize the minutes I used to spend thinking about food and calories, and cellulite, is how I skate around that to preserve my mental health," Jamil wrote.

In her conversation with Lowe, Swift opened up about dealing with media scrutiny and society's "internalized misogyny" for years. "When I was, like, 23... people were just kind of reducing me to … making slideshows of my dating life and putting people in there that I’d sat next to at a party once and deciding that my songwriting was like a trick rather than a skill and a craft," Swift said, explaining she felt her musical skills were minimized because people resorted to slut-shaming her instead. "That happened to me at a very young age, so that was a bit hard," she added.

However, thanks to advocates like Jamil — who started the I Weigh movement, which focuses on "radical inclusivity" — the singer thinks that things are finally changing in the way women are viewed in Hollywood and beyond. "We have made incredible progress," Swift said. "We’ve made incredible strides and I can look back at those lessons I learned when I was younger and I really truly don’t think I did anything wrong by having a normal dating life in my early twenties."

This was not the first time that Swift has opened up about enduring scrutiny over her body; in a March essay for Elle reflecting on the life lessons she learned ahead of her 30th birthday, the singer explained that it took her a long time to learn "not to hate every ounce of fat on my body." "I worked hard to retrain my brain that a little extra weight means curves, shinier hair, and more energy," the singer continued. "I think a lot of us push the boundaries of dieting, but taking it too far can be really dangerous. There is no quick fix. I work on accepting my body every day."

Based on her years facing harsh criticism in the spotlight, it's not surprising that Swift would be drawn to the body neutrality movement, and her public endorsement will likely encourage even more people to look into Jamil's work for themselves.

More like this
Jameela Jamil Defends Sam Smith After Trolls Body-Shamed Them
By Jake Viswanath
The Ticketmaster Senate Hearing & Taylor Swift Tickets Debacle, Explained
By Jake Viswanath
Taylor Swift & Harry Styles Had A Secret Reunion At The Grammys
By Shahed Ezaydi
Tour Rehearsals Didn’t Stop Taylor Swift From Attending The 2023 Grammys
By Jake Viswanath
Get Even More From Bustle — Sign Up For The Newsletter
From hair trends to relationship advice, our daily newsletter has everything you need to sound like a person who’s on TikTok, even if you aren’t.