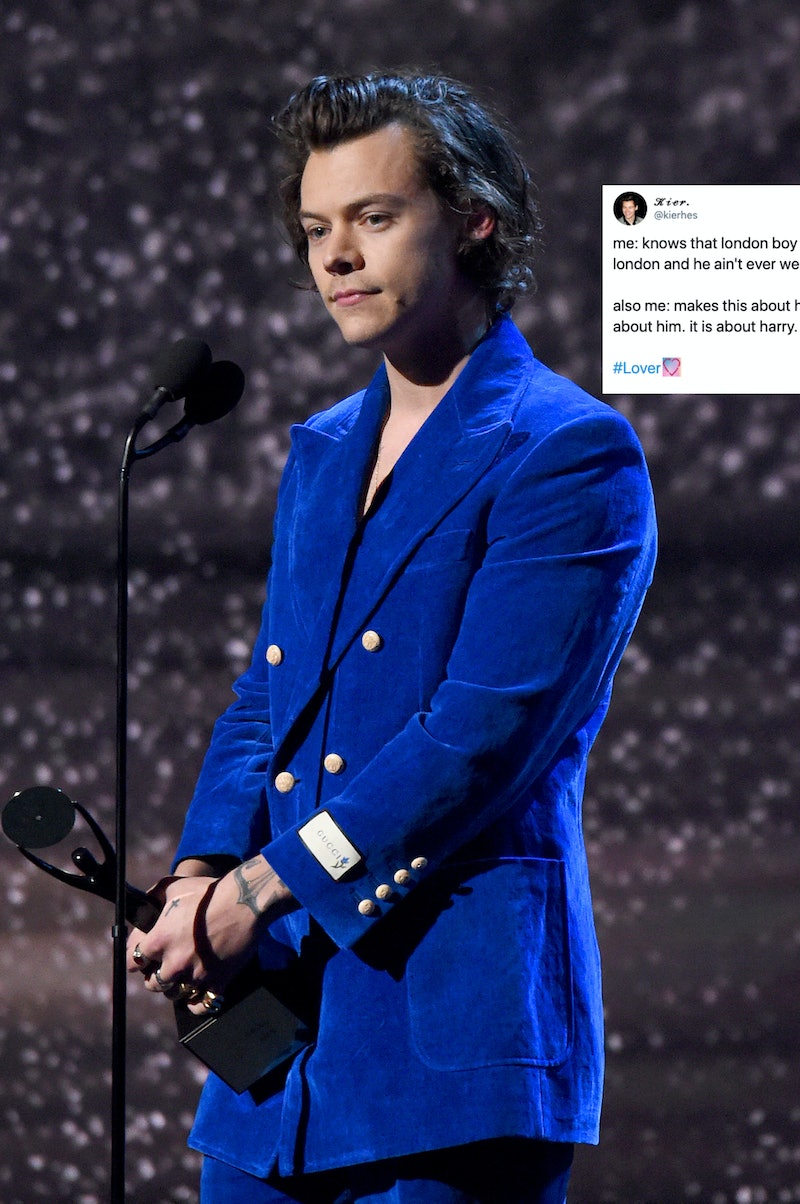 Listen, everyone knows it's hard to get over celebrity breakups, but Taylor Swift's "London Boy" is not about Harry Styles — no matter how much some Swifties listening to Lover wish it was. To paraphrase the words of the woman herself: Fans need to calm down.

This track, like many of the others on the album, is most likely all about Joe Alwyn. The title track "Lover" also points to Alwyn in the lyrics. In "London Boy" the dimples, if nothing else, give it away instantly. Other specifics in the "London Boy" lyrics like the suburb Highgate and hanging out in pubs point to their relationship timeline.

That said, some folks just can't let go of what once was between Harry Styles and Taylor Swift. There are some insisting it's about Tom Hiddleston out there. Most of them are all in good fun. Even without fan theories about who the mystery voice in the intro belongs to, this song is a fun one for Swift fans and Anglophiles alike. Lots of the folks online making jokes and memes about Harry Styles with regards to "London Boy" are not being all that serious. We'll give credit where credit is due for that.

Here are some of the best Harry-related reactions to "London Boy" out there, from the silly to the clinging to hope:

Think about the facts, people!!

Are they though? Some are just from Harry fans who want this to be their love anthem instead — and that's totally valid and fine! There are plenty of lads to go around.

Only one person (above) did the actual deep dive in the lyrics to find the one part that actually could refer to Styles, technically, and we would happily attend this TED Talk for more insight. Saying that she loves the English, plural, includes previous beaus. Gotcha!

He's still not the boy referred to in the title, though. Why would he be? It's important to draw from all aspects of life in art, but would exactly would Swift stand to gain from releasing a song about an ex-boyfriend while in a relationship with someone new? Bit awkward, to say the least. It's been so long since they were together, and they've both already released songs on the subjects. There's nothing more to say.

Not only did Styles and Swift date for only a few months over five years ago, but they mostly saw each other in New York City. They were photographed in Central Park, not Camden Market. The facts simply don't add up.

However, if you want "London Boy" to be about Harry Styles for you — or another One Direction boy, Tom Hiddleston, Idris Elba, Tom Holland, Benedict Cumberbatch, Taron Egerton... go for it! Anybody can be your London Boy, as long as we all agree that Taylor Swift's "London Boy" "Lover" is none other than Joe Alwyn.