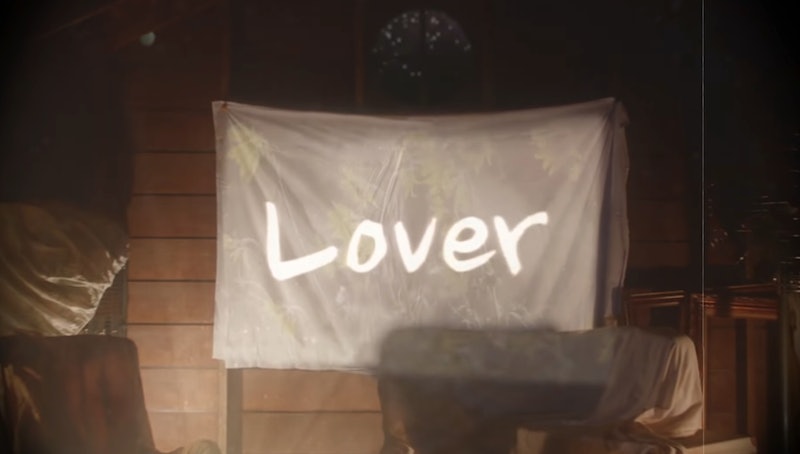 Taylor Swift and Joe Alwyn have sparked engagement rumors before. But Swift's new song "Lover" will bring wedding speculation to a whole new level. Based on the lyrics, "Lover" — like many of her songs in recent years — is all about her current boyfriend, British actor Alwyn. Swift even included some faux wedding vows to him in the bridge of the new single, which will be on her Lover album when it drops on Aug. 23. The sweet, slow jam is already being pegged to be the next big first dance song at weddings. But while the lyrics may feel applicable to lots of people's romantic relationships, they truly seem to be all about Alwyn.

Besides her signature Easter eggs, one of Swift's trademarks is to write songs about the men she has dated. Yet, like with Swift's previous songs about Alwyn, the lyrics in "Lover" show just how seriously special this relationship is to her. "Can I go where you go?/Can we always be this close forever and ever?/Take me out and take me home/You're my, my, my, my lover," she sings in the chorus. While those sentimental lyrics are rather vague, other lyrics solidify that Swift is totally smitten with Alwyn and that he's the lover she's singing about.

"I've loved you three summers now, honey, but I want 'em all"

You might not be able to spot Alwyn in the footage that's used in the "Lover" lyric video, but his mark on Swift is all over the lyrics. This seems to be a reference to how they started dating in May 2017 and are still together three summers later.

"We could leave the Christmas lights up 'til January"

The famous couple is notably private and has not confirmed that they are in an official state of cohabitation. But back in February of 2018, sources told the UK's The Sun that it was almost as if they were living together in Alwyn's London flat. British Vogue wrote in a September 2018 interview with Alwyn that he and Swift had been "living together on-and-off for a while now," while Us Weekly reported in December 2018 that a source said they were "homebodies" when in London. As for other locales, UK's Metro reported they were spotted entering her New York City apartment in December 2018 as well.

"I take this magnetic force of a man to be my lover."

Whether this international and globetrotting couple is officially living together or not, marriage could very well be on the table, as Swift heavily implies in the bridge of her song. (For her cover story with Vogue, Swift teased that the "Lover" bridge would be important when she said, "I was really able to go to Bridge City.") During this wedding vow section, she sings, "I take this magnetic force of a man to be my lover," picking up the magnetism she sang about in "Gorgeous," which many believed was also about Alwyn.

Swift is also a bit concerned that other people are drawn to The Favourite actor. "And I'm highly suspicious that everyone who sees you wants you," she sings on "Lover." This lyric mirrors a line from "ME!" where she said, "You're the kind of guy that ladies want." But despite these insecurities, the "Lover" lyrics prove she's fully committed to him.

"My heart's been borrowed and yours has been blue"

Swift teased these lyrics on Instagram following the Vogue cover story's release. Seemingly inspired by the wedding tradition of something borrowed and something blue. Could a wedding be in the cards?

Of course, every one of the song's lyrics seems to have some kind of significance to Swift's relationship with Alwyn. Like when she cheekily revealed, "And you'll save all your dirtiest jokes for me." But the main takeaway for fans is how happy she is with Alwyn and, of course, the speculation that Swift might be tying the knot with him someday soon.