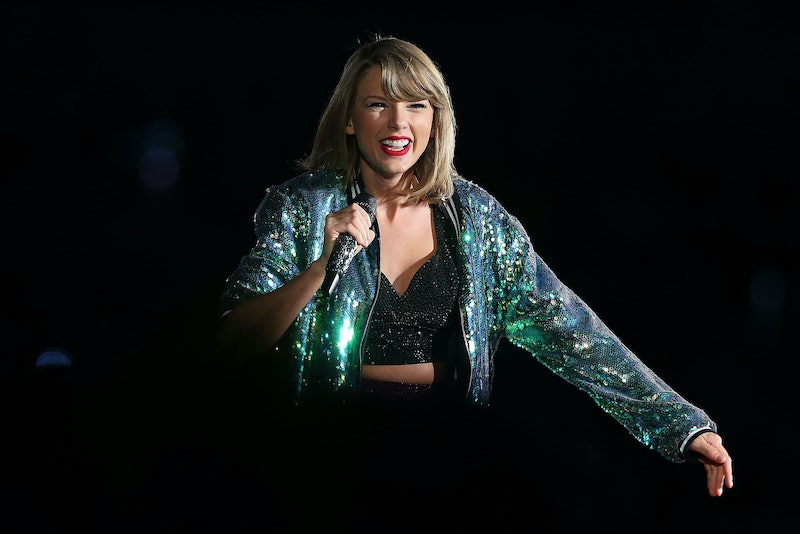 The moment that Swifties have been waiting for has finally arrived — the 1989 singer officially dropped a new track on Thursday night (or early Friday, depending what coast you're on). And as soon as you absorb the meaning of Taylor Swift's "Look What You Made Me Do" lyrics, you'll better understand why Twitter already can't stop talking about the track. This is the first song off of Swift's upcoming album Reputation, which will be released in November, and it... is a lot.

The lyrics seem to take shots at Kimye and at the media, depending on how you choose to read these dense lyrics. The story is that Swift is sick of being used and abused and pushed around by her enemies, and now she's pushing right back — and it's your fault that she's doing it. From decrying your "perfect crimes" and "little games" to announcing that the old Taylor Swift is dead to someone over the phone, this song leaves fans with a lot to unpack. You may want to listen to it multiple times in order to stop focusing on this catchy, edgy beat and start focusing on the actual message. And also to wonder who she's talking to. Let's begin.

The role you made me play

How you laugh when you lie

You said the gun was mine

This verse seems like it could be going right out to Kim Kardashian and Kanye West. In the first place, the "titled stage" line could be a reference to Kanye's floating Saint Pablo tour stage. And Kardashian infamously exposed Swift on National Snake Day for making misleading statements about whether or not she had been aware of West's "Famous" lyrics about her before the song came out. Although recording a private conversation in California without the consent of both parties is a legal grey area, Swift didn't press charges beyond noting in her statement that it was illegal. A perfect crime, wouldn't you say?

But I got smarter

I got harder in the nick of time

I mean, I rose up from the dead

I do it all the time

If the Kimye allusion in the first verse is true, then apparently Swift is still not amused. Nice dark reprise of Santa Clause there, by the way.

Oooh, look what you made me do

Look what you made me do

Look what you just made me do

Look what you just made me

Release a new sure-to-be hit song? Yeah, let's make her do it again.

They once belonged to me

You ask me for a place to sleep

Locked me out and threw a feast

The world moves on, another day

All I think about is karma

And then the world moves on, but one thing’s for sure

Baby, I got mine but you’ll all get yours

This verse specifically seems to be less about Kimye and perhaps more about the media. Swift was, after all, was considered America's sweetheart prior to the turnaround, which could be the "kingdom" to which she's referring — Hollywood, that is, not America. And no world moves on from drama to drama faster than the media world.

I don’t trust nobody and nobody trusts me

I’ll be the actress starring in your bad dreams

This reprise more or less explains itself.

Yet another Kimye allusion. Kardashian recorded a phone call between Kanye and Swift... and now the old Taylor can't come to the phone. Hmm.

It appears that we're in for a whole new Taylor Swift. The world had better prepare itself, because this song is nothing like we've heard from the singer before.