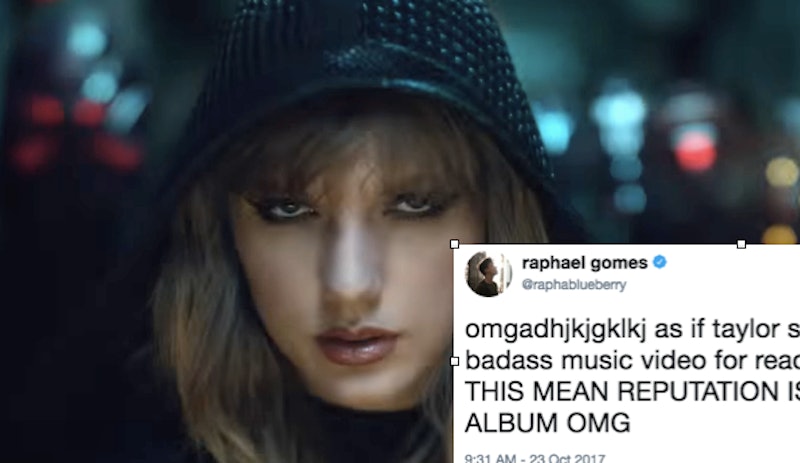 Fans of Taylor Swift were given a surprise on Monday morning, Oct. 23, when Swift shared a teaser clip of the video for "...Ready For It?" on social media. The full, official video is set to be released on Thursday, Oct. 26. Users on Twitter quickly took note of the epic science fiction inspired vibe of the visuals, with others pointing out how similar Swift looks to Scarlett Johansson's portrayal of Major Motoko Kusanagi in Ghost in the Shell. Overall, it's hard not to be drawn in by the clip, and fans are pretty much at peak excitement over this new era in Swift's career.

Exactly two months ago, on Aug. 23, Swift caused a similar social media stir when she first announced that her new album, Reputation, would be coming out in November. It was just a few days later when she dropped the video for her first music video for the album for "Look What You Made Me Do," and in doing so reclaimed the snake emoji. Swift then shared a one minute clip of her second song off of Reputation, "...Ready For It?" during a primetime football game between Alabama and Florida State. As Bustle's Alex Gladu pointed out, the matchup had been described as “the biggest opener in college football” by SBNation, due to the universities respective rankings in an AP Poll.

Immediately, "...Ready For It?" was embraced by fans of Swift who flocked to social media to share memes and GIFs about their excitement. In "LWYMMD" Swift announced that the "old Taylor" was dead, and "...Ready For It?" certainly seemed to confirm the sentiment. First, featuring Swift rapping, and now by hitting us with insane visuals that have many fans feeling shook.

Swifts "LWYMMD" music video set a YouTube record when it accumulated more than 43 million views in 24 hours. According to Swift's Instagram, the official "...Ready For It?" video comes out Thursday "night." Depending on what time zone she was talking about, that could potentially span a number of hours. And for fans, the full "...Ready For It?" music video can't come soon enough.

One of the most popular reactions to the video is how great the science fiction style visuals in the video appear to be. Some fans are calling "...Ready For It?" the "best Sci-Fi movie of the year," or saying "Swift's music videos are better than most Sci-Fi movies." Although the clip she released is only a few seconds, the video definitely has a futuristic vibe.

Perhaps even a bit dystopian? Either way, us Swifties are here for it.

The Undeniable Ghost In The Shell Comparison

Because of Swift's cyborg like appearing during a few scenes, a number of users of Twitter are saying the "...Ready For It?" visuals remind them of the movie Ghost in the Shell, which came out earlier this year.

Ready or not, the full video is coming.

Quite a few fans have noticed that in many scenes Swift appears to be mimicking her video for "Out of the Woods," and if you look at some of the side by side comparisons they make a compelling argument.

These loyal Swifties were literally moved to tears.

Something To Look Forward To

Is it Thursday yet?

Because of the fact that Swift is about to release the second music video from her Reputation album a few weeks before its Nov. 10 release date, people have begun speculating that Reputation could be a visual album. Which, if true, would be a delight for all of us Swift fans.

With all of the sci-fi, dystopian cyborg vibes, and so many potential references stuffed into a such a short teaser video, one thing is for sure — the full "...Ready For It?" video is unlikely to disappoint.