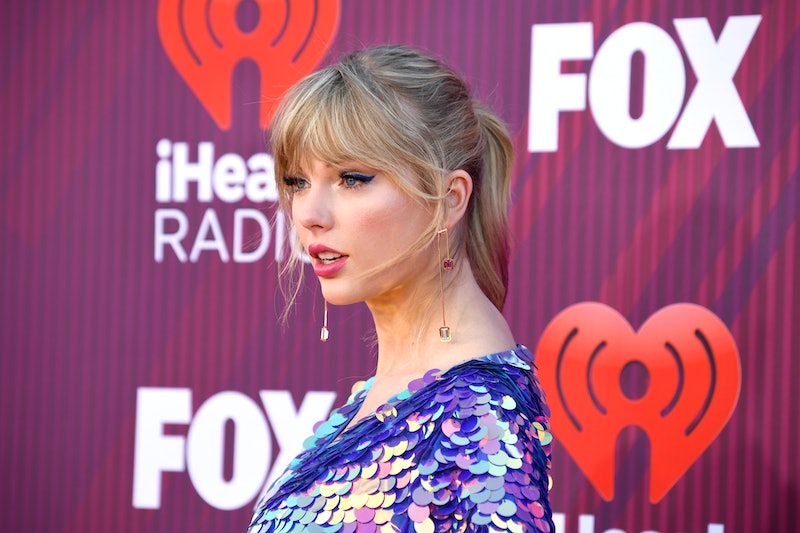 For the past few weeks, Taylor Swift has been teasing major news on social media, using a flurry of images of pastel pink ruffles and baby blue hearts. That new Instagram aesthetic came to life on April 23, when Taylor Swift wore a fluffy dress to the TIME 100 event, which celebrates the magazine's 100 Most Influential People list. Swift fans are going to have to wait until April 26 for her to reveal her news, judging by her captions. But Swifties don't have to wait any longer to see her new look.

Swift's TIME 100 frock was utterly darling, and it was unlike anything the singer has worn in quite a while. The whimsical and airy J. Mendel dress was pink, and all about volume and balance. It was strapless with a straight, pleated skirt, yet boasted huge, puffed bell sleeves. The dress featured two yellow panels on either side, along with floral detailing under the bodice.

Swift wore her blonde locks in a messy updo, with wispy bangs, loose, layered pieces that framed her face, and a tiny flower crown. She also opted for soft pink lips and flushed peach cheeks, which were similar to her look for her TIME 100 cover.

Overall, it was a romantic presentation. Swift made quite a sweet statement when returning to the red carpet.

The dress was deceptively simple. The elegant, column construction got a dose of "oomph" from the power sleeves.

From the side, the sleeves gave off all of the '70s vibes.

They were were also removable. Swift slipped out of the sleeves while performing at the gala.

Swift's TIME 100 look is a marked contrast to her style leading into and during the cycle for her last album, 2017's Reputation. For that era, Swift went with a darker, dramatic, and somewhat gothic image, wearing blood red lipstick, long red nails, tight curls, and snake jewelry. She has softened things up quite a bit as she approaches TS7, which is fan-speak for her seventh album and is what people are expecting her to reveal on April 26.

Swift hasn't been too visible on red carpets much in the past several months. However, when she has emerged to get dressed up, it's been epic. She slayed a see-through black Atelier Versace dress when presenting at the 2019 Golden Globes. She also rocked a bedhead updo and her familiar red lips.

Swift also supported her boyfriend Joe Alwyn at the 2019 BAFTAs, wearing an ice blue Stella McCartney princess dress. She paired the Cinderella gown with defined waves and a pink pout. Is the latter becoming one of her new signatures? It's quite possible that pink lips are replacing the red ones that defined the Red and 1989 eras.

Ultimately, it has been entirely exciting to watch Swift's style morph as she navigates the phases of her albums and career. Everything is usually tied together — from the packaging to the merch to her personal ensembles. Her look continues to evolve, and the changes between Reputation and TS7 are gloriously stark.

Tune in to Swift's social channels on April 26 to see what news she shares. If she is indeed kicking off a new album cycle, loyalists can expect to see a lot more T. Swift red carpet appearances, couture ensembles, and epic hairstyles in the coming months as she promotes her latest release.