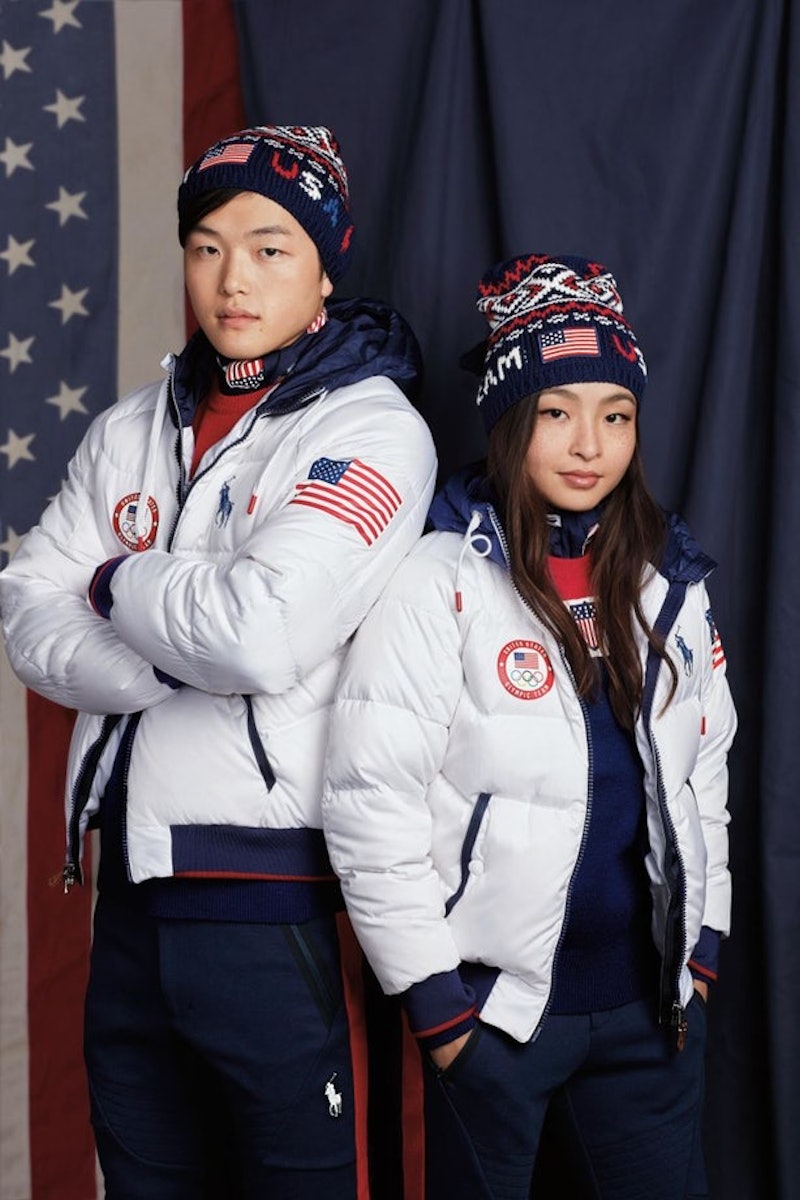 The 2018 Olympic games have been full of fashion, and while that may sound strange, just think about it. From figure skaters' incredible costumes to countries' opening ceremony uniforms, it's there. With the games barreling toward their close, you may be wondering about Team USA's 2018 Olympic closing ceremony uniforms. While the look does stay in a similar lane to their ultra-preppy opening ceremony looks, it's much more laid back and takes on the athleisure trend in an obviously high-end way.

Just like the opening ceremony looks, the Team USA closing ceremony uniform was designed by none other than Ralph Lauren. He's practically the master of quintessential American prep, and the choice makes total sense. Plus, he's been designing Team USA's ceremony uniforms since 2008, and he'll continue to do so until 2020.

As for 2018's looks, they're, of course, red, white and blue, but there are a few tweaks from the Opening Ceremony uniform. The first is that the jeans have been replaced with a pair of navy track pants with a red and white strip along the side. The next is that the puffer jacket has been pared down. While the atheletes will still be wearing the style, they appear less bulky and are solid white with the American flag on the arm, the Olympic symbol over the chest, and the Polo symbol on the other side.

The big news about the uniforms, though? They cost almost as much as the gold medals the athletes will be wearing.

It shouldn't come as a surprise that a Ralph Lauren designed uniform would be pricy. A glance at the opening ceremony looks' prices, and you'd know that from hats to mittens to jackets, finding something that retails for under $100 is rare. Basically, these laidback don't come with laid back price tags.

Just how expensive are the items? They're not all up for grabs, but the ones that are will definitely be an investment if you want to embody your inner Chloe Kim or Bradie Tennell.

Why yes, this sweater does cost nearly $500. If you love Team USA, maybe it's worth it? Maybe?

As for the pants, they're sold out, but you can can still how much these classic athletic inspired trousers cost. Good news? They're less than the sweater. Bad news? They're almost $400.

If you're loving the boots that the athletes will be wearing at the closing ceremony (and the same ones they wore during the opening ceremony), no one would blame you. They're great. They're also nearly a grand. Yes, as in $1000. But hey, boots are an investment piece, right?

As for the super cute hat? In the grand scheme of things, it's affordable. At $195, it's kind of a steal for the Ralph Lauren designed uniforms.

Coming in last of the items from the closing ceremony uniform are these mittens. They're cute design and adorable button are adorable, but at $135, maybe not so much anymore.

If, however, you've got the extra cash, love the Olympics, and Team USA, these may be great collectors items for your collection. At over $2000 for the ensemble, though, these pieces may actually be more valuable than Chloe Kim's gold medal or Team USA skatings' bronze medal from the team skate.

Regardless of the pricing, though, the 2018 Team USA closing ceremony uniforms are undoubtedly cool (but also very warm because it's cold in South Korea), and the quintessential American style is perfect.