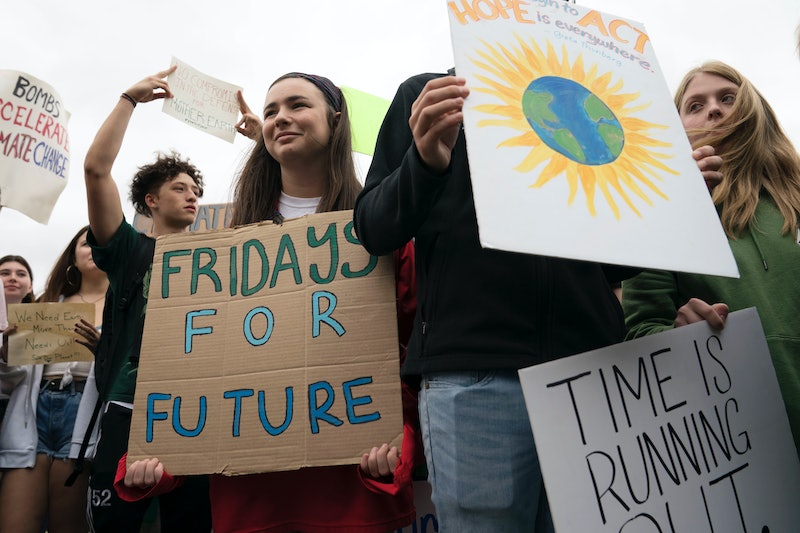 In 2019, the science around climate change is irrefutable. Climate scientists and experts agree dramatic action is necessary to curb carbon emissions in the next decade in order to prevent widespread devastation, from rising sea levels to fatal heat waves. In response, there have been a number of bold strategies geared toward motivating government officials to act quickly, and the latest is coming from a group of Canadian teens. The "No Future, No Children" pledge is exactly what you think it is.

Emma Lim, an 18-year-old student at McGill University in Montreal, started the movement, which encourages young people to pledge not to have children until their politicians take immediate and aggressive action against climate change. Nearly 1,200 people had signed the pledge, as of Thursday, and that number is rising every day.

"I was inspired to start #NoFutureNoChildren after seeing just how little my elected officials were doing to fight the climate crisis," Lim tells Bustle. She noted an oft-cited deadline: the world needs to drastically reduce global net carbon emissions by 2030, or face the disastrous long-term consequences of climate change. This 2030 deadline was issued in a 2018 report by the United Nations Intergovernmental Panel on Climate Change, among other sources.

Of course, the potential consequences of inaction around the issue of climate change are wide ranging, and exponential. But according to NASA, the future effects of climate change will likely lead to rising and unlivable temperatures in some parts of the world, more droughts and heat waves, more intense hurricanes, a rise in sea levels by upwards of four feet by 2100; an ice-free Arctic, and more. You can read more specifics here.

For Lim, 2030 isn't just a doomsday calculator. It also marks a significant point for people her age. "In 2030, I will be 29 — about the average age to have children for women in Canada, but when I am 30, the world will be just at the edge of a series of irreversible chain reactions that we can’t come back from," she says. "Any child I would have is facing a future of economic instability, of unclean air and water, of extreme weather and political instability. I would rather give up my lifelong dream of being a mom than see my baby suffer."

Though the primary goal of the movement, for now, is for people to sign the pledge, Lim makes it clear that she expects to see action-oriented results. "I want Canada to set serious and ambitious emission reduction targets, and transition immediately to green energy," she says, pointing out some of her frustrations with her home province of Ontario.

"Premier Doug Ford has cancelled cap-and-trade, cancelled incentives for electric cars, fired the environmental commissioner, slashed emergency funding for floods and fires, and spends millions of dollars fighting the carbon tax," she explained. "I want my leaders to act like leaders."

On the website for #NoFutureNoChildren, you can read the stories and perspectives of the many young people who have signed the pledge. "Without action, I refuse to put any future lives at risk of climate catastrophes in the future," one person wrote.

"Young people like me don’t have the option of having safe and happy families," another person wrote. "Irresponsible governments kneeling to the fossil fuel industry took away that away from us."

You can read more of those stories here. And if they move you, you can consider the ways you can take on the climate change crisis, from attending climate strikes to learning more about where each U.S. presidential candidate stands on the Green New Deal.

More like this
5 Ways To Stand In Solidarity With Women In America From The UK
By Sophie McEvoy
How To Fight For Reproductive Rights, Based On How Much Time You Have
By Courtney Young
Windrush Victims Are Still Waiting For Compensation
By Sam Ramsden
Boris Johnson’s Leadership Is In Question – Again
By Bustle UK
Get Even More From Bustle — Sign Up For The Newsletter