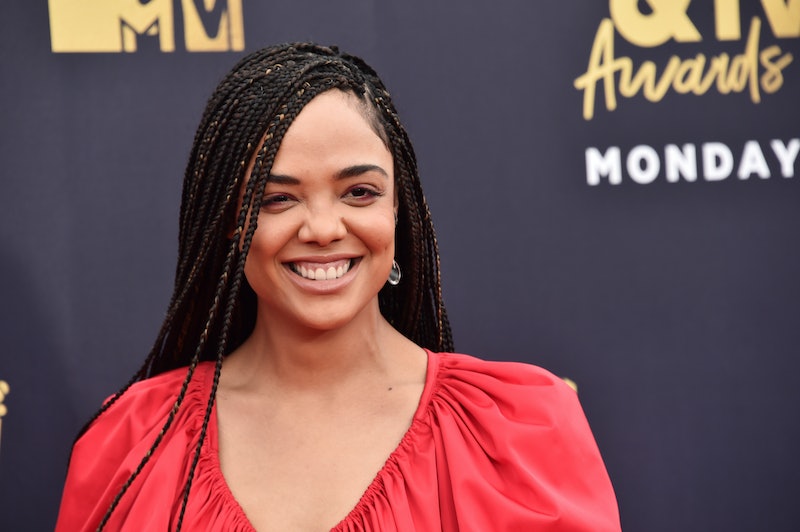 Sauce up the spaghetti and ditch the forks, because one of your favorite actors may be prepping to have herself a bella notte. As Deadline revealed on Tuesday, Aug. 14, Tessa Thompson is in talks to voice Lady the Cocker Spaniel in the live-action remake of Lady and the Tramp. The adaptation of Disney’s 1955 animated gem will not be released in theaters, but it will be one of the original flicks made available on Disney’s to-be-launched streaming service. (Bustle reached out to Disney and Thompson's reps for comment regarding on the casting, but has not yet received a response.)

Here is an objective fact: Thompson is awesome in everything. Therefore, she would certainly make an awesome Lady in a live-action remake of Lady and the Tramp. It probably goes without saying, but whatever, let's say it anyway: We are big fans of this casting scoop.

Also? A live-action remake of one of the most charming Disney movies of all time really would be a fun addition to the actor’s ridiculously cool and dynamic filmography. Thompson has appeared in Sorry to Bother You, Annihilation, Westworld, and Dirty Computer — and that is just this year. And this November? We will see her reprise the role of Bianca Porter in Creed II. Oh, may we not forget about the Men in Black spinoff that is coming down the pike next year.

The report regarding Thompson and he Lady and the Tramp remake is just one of many Lady and the Tramp casting scoops. Back in July, The Hollywood Reporter revealed that Justin Theroux was set to provide the voice for the Tramp. But wait, there's more: Kiersey Clemons is set to play Darling, the human who owns Lady, Benedict Wong will play an English bulldog named Bull, and Ashley Jensen will voice Jackie the Scottish Terrier. Needless to say, the Lady and the Tramp roster really is shaping up to be an im-paw-ressive one.

In August 2017, Variety reported Disney CEO Bob Iger announced the company plans to put out its very own streaming service in 2019. As Deadline noted last September, the library will include Disney’s catalog of nearly 500 movies, as well as 7,000 episodes of Disney TV shows. There will also be four or five original movies and four or five original TV series created just for the streaming service.

And yes, one of those four or five original movies headed to Disney’s streaming service could be a remake of a classic cartoon about two dogs who fall in love and stumble upon a romantic way to tuck into pasta.

Deadline revealed in February that Lady and the Tramp is one of Disney’s “priority movie projects” for the upcoming streaming service, and The Hollywood Reporter announced the following month that animator and The LEGO Ninjago Movie director Charlie Bean has been hired to stand at the helm of this live-action/CGI ship. The movie will film this fall in Georgia. And assuming those reported negotiations work out, it looks like Thompson will star opposite Theroux in what genuinely already sounds like quite the delightful remake of Lady and the Tramp. Hot diggity dog.