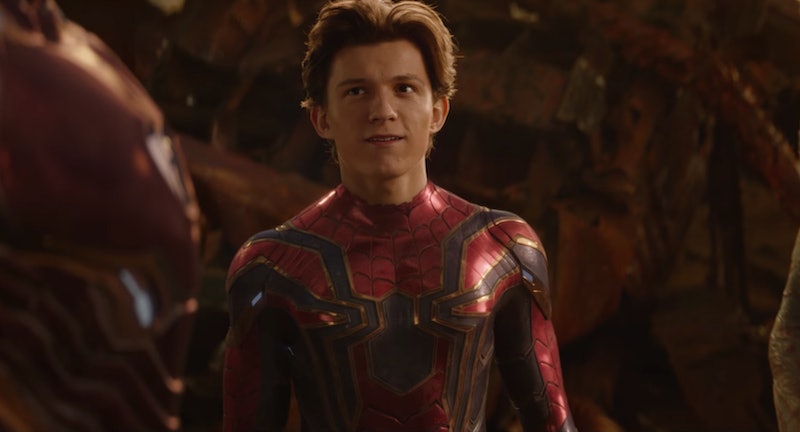 Spoilers for Infinity War. Marvel Cinematic Universe fans don't feel so good. First, we had to sit through the emotionally painful final 10 minutes of Avengers: Infinity War, and then we hear reports that Tom Holland improvised his heartbreaking Infinity War final scene with Robert Downey Jr. It's almost too much for one fan to bear. Well, get ready for it to feel even worse, because directors Joe and Anthony Russo confirm to Bustle that Holland did improvise some of that scene — but maybe not as much as you might think.

In Spider-Man's final scene in Infinity War, Peter Parker falls into the arms of his mentor Tony Stark, suddenly weak. Thanos has gotten the Infinity Stones, snapped his fingers, and kickstarted the mass genocide of half of the universe, causing a good portion of Avengers to dissolve into dust. "Mr. Stark, I don't feel so good," Peter says before collapsing in front of Tony. "I don't wanna go. Please, I don't wanna go," he adds, then turns into dust. It's arguably the most heartbreaking moment in the film, Spider-Man's death scene was brutal for fans, and it became an online sensation when it was reported that Holland had improvised his character's final words.

However, as the Russo brothers revealed in an interview at New York's Four Seasons hotel one week after the film's release, Spider-Man's death scene was always meant to be a tearjerker, with the lines "I don't feel so good" and his final words, "I'm sorry," written in the script. "We knew that we always wanted it to be the most painful. He's a child. This is not something he understands completely yet," Joe says of Peter. But once they got on set, the directors felt that it just wasn't devastating enough. "Knowing the relationship between Tony and Peter that has been seeded in previous films, when we were watching the execution of the scene, it felt like it wasn't pulling at our heartstrings enough," Joe recalls.

After watching the actors do the scene as written, the Russos decided to give Holland a bit of extra emotion. "We went in and said to Tom, 'Listen, you're a kid and you don't want to go. This is the last thing we want to have happen to you. And we want you to fight it. We want you to use everything you have to fight it.'" It was the very next take that ended up being in the final cut of the film. "He unlocked it emotionally, he understood what we were asking for, he interpreted what we asked him to do to, improvisation between he and Downey... That's in the film," Joe says of Holland.

Both directors are quick to acknowledge that Holland's performance wasn't exactly a one man job, giving credit to Downey, who Anthony notes has been Holland's mentor both on and off set. "We should also really credit Downey for a lot," Anthony says. "You see how much he gives to [Tom] in the scenes, he's really looking out for where he can help him develop and expand and improvise. So Downey couldn't have been a better partner to him in that moment."

Improvised or not, we can agree that the scene between Spider-Man and Iron Man in Infinity War was the most crushing, tearjerking moment in the entire movie. Even though most fans are convinced that the Avengers turned to dust by Thanos aren't really dead, Peter's last words remain a truly devastating blow to fans everywhere. RIP Peter Parker (for now), a precious baby who deserves all our love and protection.